Movie titles can sometimes be deceptive but you know exactly what you’re in for with the aptly named Creature with the Atom Brain (1955). A superior B-horror film with sci-fi elements and a crime syndicate subplot, this 1955 Sam Katzman production gets right down to business before the opening credits even begin with the sound of a beating heart growing louder and an ominous looking figure lurching toward us from out of the dark. 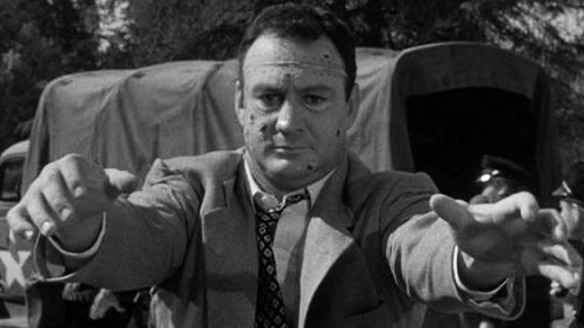 Director Edward L. Cahn (The She-Creature [1956], Invasion of the Saucer Men [1957]) wastes no time in laying out the premise in the opening murder sequence: A zombie-like thug with superhuman strength breaks into a mobster’s study and kills him despite being riddled with bullets. The assailant is actually a reanimated corpse being operated by a remote control device and the manipulator is deported gangster Frank Buchanan (Michael Granger), who has secretly entered the country from Europe. He’s come back to avenge himself against the business rivals who helped get him convicted and his secret weapon is former Nazi scientist Professor Steigg (Gregory Gaye). It seems that Professor Steigg has discovered a way to bring the dead back to life by atomic energy but he needs a steady supply of morgue bodies to build the zombie army Buchanan ultimately desires. At first, police scientist Chet Walker (Richard Denning) and his partner Dave Harris (S. John Launer) are baffled by the mysterious series of killings committed by dead men but once they discover a link between recently murdered District Attorney MacGraw (Tristram Coffin – great name!) and Buchanan, the criminal he prosecuted, the pieces in the puzzle come together quickly.

The sixty-nine minute running time flies by in Cahn’s tightly paced narrative which dispenses with static talking head shots in favor of scenes where the characters are filmed in real time, either standing, pacing or sitting – with no edits. The futuristic concept of using nuclear energy to create synthetic brains (a scientist’s sketch of a creature’s brain looks like a subway map of New York City) is also an unexpected concept for a 1950s B-movie. The man-made zombies not only leave glowing fingerprints behind but their contamination level could kill a normal person due to the high radiation count. The atomic energy also endows them with great strength, allowing them to bend steel bars or snap a man’s back like a pretzel (we see this particular feat – complete with gruesome sound effects – rendered as a grotesque shadow on the wall).

A typical newspaper headline from CREATURE WITH THE ATOM BRAIN (1955).

What really makes the movie great fun though is the often absurd dialogue which is conspicuous in almost every scene of Chet’s domestic home life. Chet is depicted as a bit of a workaholic whose sexy, platinum blonde wife Joyce (Angela Stevens) would love to know more about his job and current investigations but is usually dismissed with remarks like “I don’t believe in talking shop when I’m home.” Chet’s daughter Penny, a particularly awkward and annoying child actress named Linda Bennett, doesn’t get much attention either and often turns to her doll Henrietta for solace. After one particularly trying day at the office, Chet comes home to find his wife upset about the daily newspaper headline – “DO DEAD MEN WALK CITY STREETS?” – and fearful that Penny will see it. Chet’s irritated response is “I’m tired and hungry….and I don’t know anymore than it says right there. Look, how are we fixed for an ice cold martini?” Joyce, in response, angrily stuffs the newspaper under a couch cushion and says with noticeable sarcasm, “Coming right up, Chet!”

international poster for Creature with the Atom Brain

Even when a zombie comes calling on the Walker household – in this case, Chet’s unfortunate partner Dave – the situation unfolds in the innocuous manner of a Father Knows Best episode or some similar domestic sitcom. Dave, now bearing a huge surgical scar across his forehead and speaking in a dull, drone-like tone, is obviously VERY DIFFERENT from the last time he visited but Penny and Joyce don’t exactly have a high level of awareness. “Why so formal?” Joyce says in response to Dave’s mechanized voice while little Penny tugs at his wrist and exclaims, “Gosh, your hand is cold.” They eventually figure out “Uncle Dave” is not quite right after he tears Penny’s doll into little pieces.

An Italian lobby card of CREATURE WITH THE ATOM BRAIN (1955)

It’s hard to pick a favorite scene in Creature with the Atom Brain but you have to love a movie where the local television newscaster addresses his viewers in this manner: “…with the murder of Jason Franchot last night I must apologize for my recent skepticism regarding these radioactive creatures. It seems they do exist and are prowling the street.” His matter of fact delivery and lack of panic indicates that something as extraordinary as dead people walking about is an easy thing to quickly grasp so just get used to it, people, ok? 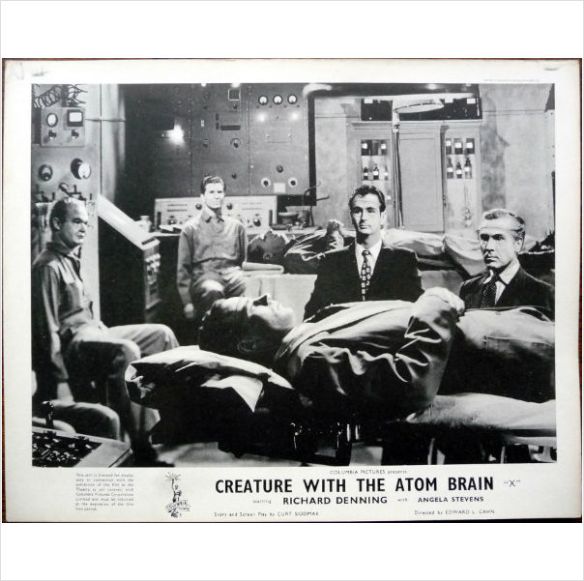 The zombie waiting room in CREATURE WITH THE ATOM BRAIN (1955).

A final bit of trivia about Creature with the Atom Brain. It was reportedly one of the first films to use squibs to simulate gunshot wounds. It was also banned in Sweden and Finland when it was first released. 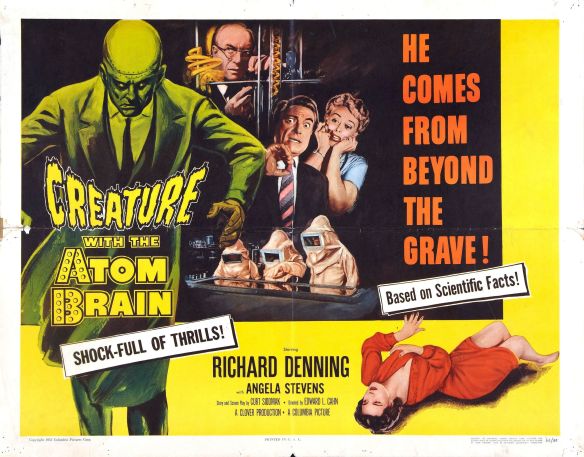 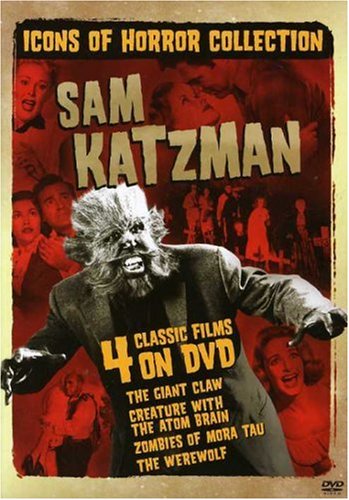 Creature with the Atom Brain is featured in this DVD collection