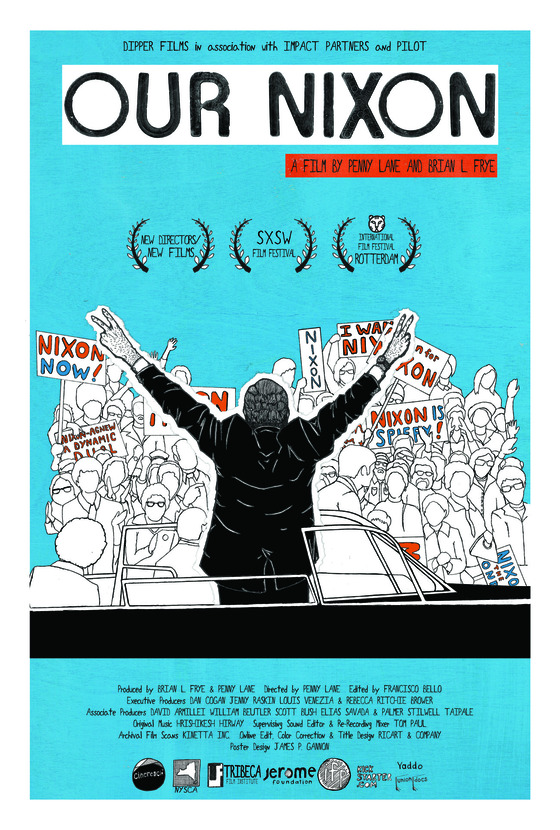 Another highlight among the documentary entries at the 2013 VFF (Virginia Film Festival) was Our Nixon by Penny Lane, which takes an unexpected approach to a topic which has been the covered exhaustively in books, articles and films – the presidency of Richard Nixon. The hook here is that Nixon’s core staff members – H.R. Haldeman (Chief of Staff), John Ehrlichman (Domestic Affairs Advisor) and Dwight Chapin (Special Assistant to Nixon) were all home movie enthusiasts and took lots of candid super-8 footage (over 500 reels) during their White House tenure. Lane was able to get access to their films and uses them as a way to re-examine this turbulent time in American politics.

H.R. Haldeman shooting super-8 home movie footage of Nixon In China (from the documentary OUR NIXON)

The footage itself is not particularly ground-breaking or unusual in terms of what is being filmed – Nixon dancing with his daughter Trisha at her wedding party, Ehrlichman enjoying a meal on the President’s private jet, Nixon and his wife Pat at the Great Wall of China during his 1972 visit. It’s how Lane combines and edits this home movie footage with select audio excerpts from Nixon’s secretly taped White House phone calls, pop music, archival footage and previously filmed interviews with Haldeman, Ehrlichman and Chapin that makes Our Nixon such a compelling and rarely seen window into the 37th President’s private world. 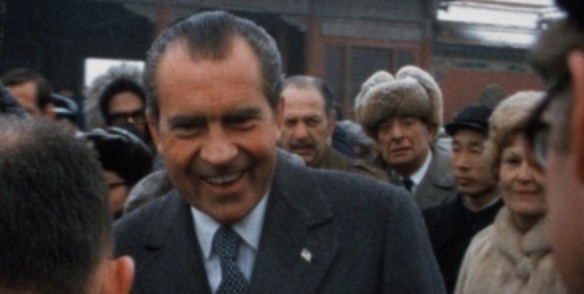 The documentary OUR NIXON (2013) directed by Penny Lane

By concentrating mostly on Nixon’s White House years in chronological order, the film generates a growing dramatic tension as the Watergate scandal breaks and begins to unravel like a runaway train. For those of us who lived through that era, it is particularly interesting to see this version of events told from an insider point of view. In an interview with Lane for US History Scene (http://www.ushistoryscene.com), the director admitted that Haldeman, Ehrlichman and Chapin were essential to the film because, “We wanted to experience their life as it was lived. We wanted to focus on the interpersonal relationships that happened in that White House, we tried to avoid anything that was too policy oriented. We wanted to do something more modest: what can looking at these three men and what they filmed tell us something new about Nixon?….A lesson for me that I take away is that these were just ordinary men in extraordinary circumstances – they did do questionable, unethical, and illegal things — but at the end of the day, they were just men. I feel society tries to make the Nixon Administration an exception, that they were somehow different, but I think in a gentle way the film asks you to question that. What are other White House staffs like? We don’t know anything about the way our Presidents talk in private to their staffs or friends.”

Carol Feraci, the surprise protestor, is in the center

Our Nixon does have its share of surprises and unexpected moments that I haven’t encountered before in other documentaries on the subject. For example, there is footage of a White House social event in which the Ray Conniff Singers were scheduled to perform. Just before the concert begins, Carol Feraci, one of the singers pulls out a banner that reads “Stop the Killing” and holds it up. Someone tries to pull the banner out of her hands but she yanks it away and says into the microphone: “Mr. President, stop the bombing of human beings, animals and vegetation. You go to church on Sunday and pray to Jesus Christ. If Jesus Christ were in this room tonight you would not dare to drop another bomb. Bless the Berrigans and Daniel S. Ellsberg.” With that, she steps back in line and the Ray Conniff Singers launch into “Ma, She’s Making Eyes at Me.”

This button was actually created by Republican campaigners

The room is momentarily silenced by this protestor’s surprise ambush. The surprising thing is that she is allowed to speak, is not escorted away immediately and even stays to perform the number with her co-singers. Perhaps everyone was too embarrassed or shocked to respond immediately or maybe removing her by force might have generated larger media coverage. White House staffers may have reasoned that if they ignored Feraci, the incident would blow over and be quickly forgotten. But to see it here on film years later is quite a show stopping moment.

Other moments that stand out are Nixon’s phone harangue over the TV sitcom All in the Family in which he decries the episode’s inclusion of a gay character and goes off on a morality rant (he doesn’t seem to know the sitcom by name and refers to it as “Archie,” the main character played by Carroll O’Connor). Nixon’s animosity toward Henry Kissinger for claiming credit for ideas which the President insists were his own erupts during one phone call with Haldeman.

President Nixon visits China in 1972 (from the documentary OUR NIXON)

The candid home movie footage of Nixon in China is further demonstration of what a complicated person he could be. A vehement anti-communist and member of the House Un-American Activities Committee that exposed Alger Hiss as a traitor, Nixon’s China visit and his meeting with Mao Zedong (aka Mao Tse-tung) must have seemed like an opportunistic publicity stunt to people who knew his politics but in hindsight his trip seems progressive and even surprising in view of his past. 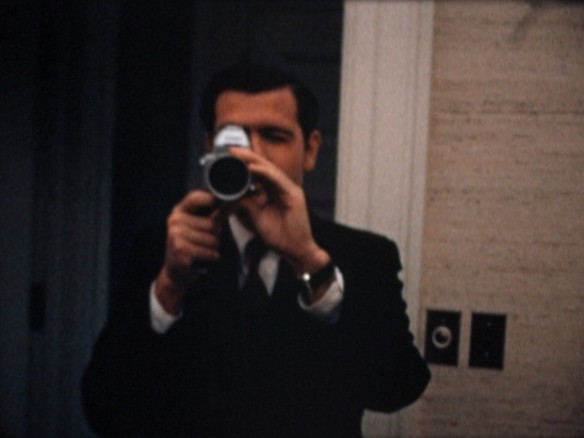 One last item to note if you happen to see Our Nixon: Make sure you stay through the final end credits. At the very end, you’ll see a post-Watergate commercial for Dreyer Farms Ice Cream in which Ehrlichman is the pitchman. The fact that Ehrlichman references Watergate indirectly as part of the ad campaign’s humorous approach seems surreal now. What ad agency genius thought this was a good idea? When the ad was tested in a local market, it received unanimously negative feedback and was quickly pulled. Now it’s just one of the many bizarre historical footnotes that make Our Nixon such a fun roller coaster ride.