Now in its 26th year, the Virginia Film Festival in Charlottesville might not enjoy the high profile of Sundance or Telluride but that’s actually to its credit. While the latter festivals continue to introduce important new filmmakers and work to audiences, the media attention and crowds they attract can often be exhausting and even competitive for attendees trying to get into a select screening. That is not yet the case with VFF which continues to take a relaxed, laid back approach to film festivals despite an ambitious schedule of almost 100 screenings. Very rarely do you have to contend with long lines or sold-out shows. Nor do you often encounter the entertainment press getting priority treatment or trying to impress you with celebrity name-dropping in cellphone conversations that you can’t avoid at other major film industry events.

The majority of the venues are located in the downtown mall area of Charlottesville – the Paramount and the Regal Theater (which has four screens devoted to the festival) – with two large screening spaces located on the University of Virginia campus in the Culbreth and Newcomb auditoriums. The only disadvantage for out-of-town attendees is that you will need a car if you plan to attend any screenings on the UVA campus as the Culbreth and Newcomb locations are too far from the mall area by foot.

Alfred Hitchcock on the set of THE BIRDS

This year the festival took place Thursday, Nov. 7-Sunday Nov. 10 and I was able to catch six films during a visit with family members who live in the area. Among the screenings I attended were Le Joli Mai, Gloria, The Pervert’s Guide to Ideology, A Single Shot, The Missing Picture, and Our Nixon. The festival usually offers an eclectic mix of new documentaries, international and independent fare and selected retrospective programming such as Alfred Hitchcock’s The Birds (with actress Tippi Hedren present to discuss her experience making the film), The 7th Voyage of Sinbad, The Court Jester, Walt Disney’s animated version of Peter Pan, Douglas Sirk’s All That Heaven Allows and the rarely seen 2010 comedy MacGruber (based on the sketch comedy character created by Will Forte on SLN; Forte was one of the guests at VFF). 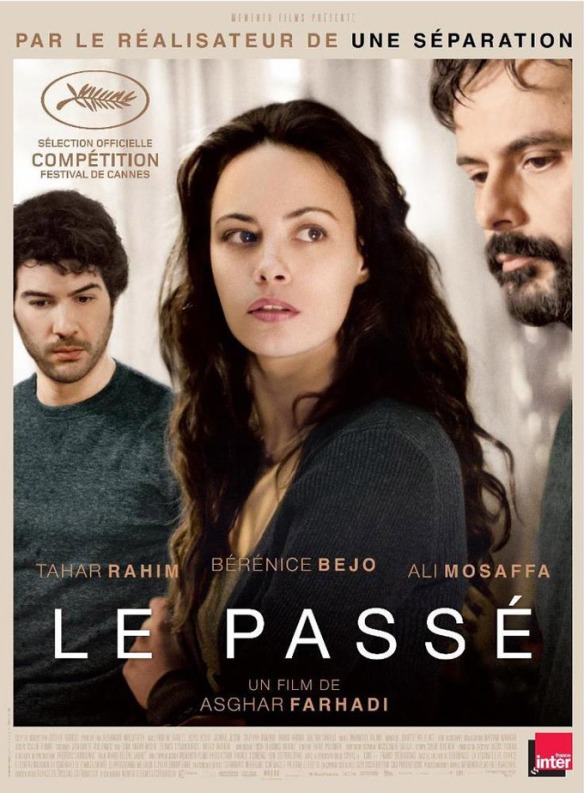 Several of the new films were hot off the festival circuit, arriving with critical kudos and notoriety from Cannes and other festivals, such as Abdellatif Kechiche’s Blue is the Warmest Color, The Invisible Woman (directed by and starring Ralph Fiennes), Alexander Payne’s Nebraska, The Past (Asghar Farhadi’s follow up to his Oscar-winning A Separation), August: Asage Country (the Meryl Streep-Julia Roberts comedy-drama adapted by Tracey Letts (Killer Joe, Bug) from his own play and the much-anticipated documentary, The Armstrong Lie. My strategy is usually to avoid these high profile titles because I know they’ll receive theatrical distribution in the weeks ahead. Instead I try to seek out the films that won’t be readily accessible for some time or might not even find distribution at all. 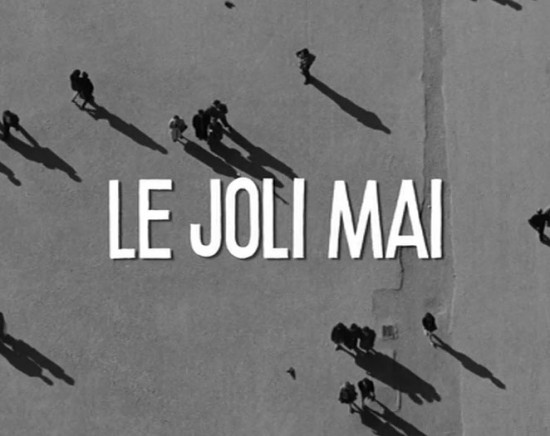 One of the major revelations for me was the revival of Chris Marker and Pierre Lhomme’s landmark documentary, Le Joli Mai (1963). Restored and re-edited by Marker in 2009 (he died in 2012), the film, assembled from over 55 hours of footage, now has a running time of 146 minutes (though it once existed in versions that varied between seven and twenty hours in length); To add to the confusion, IMDB lists the original running time as 165 minutes. This is a deceptively unconventional portrait of Paris and French culture at a pivotal turning point in the country’s history. What seems like unadorned man-on-the-street interviews and brief snapshots of that particular place and time begin to take shape as a critique of France by the filmmakers who don’t assert their own opinions into the mix. Yet you can almost feel their amusement, empathy, cynicism or displeasure with their subjects from the questions that are asked and the way in which Le Joli Mai is edited. Clearly influenced by Edgar Morin and Jean Rouch’s Chronicle of a Summer (1961), Le Joli Mai follows a similar open air, public inquiry approach to its subject, which in turn inspired such American documentaries as Inquiring Nuns (1968) by Gordon Quinn, the founder of Kartemquin films and co-producer of Hoop Dreams (1994). 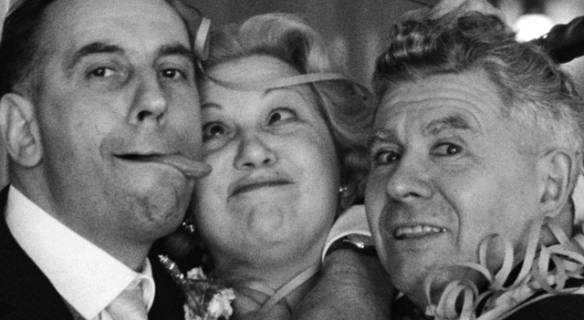 This marked the first time France hadn’t been involved in a war since 1939; their eight year attempt to control and suppress Algeria in its struggle for independence had come to an end in 1962. Yet, many of the Parisians interviewed on the streets, in their homes or shops seem apathetic or uninterested in politics as if it has no bearing on their lives or is simply beyond their control so why care? 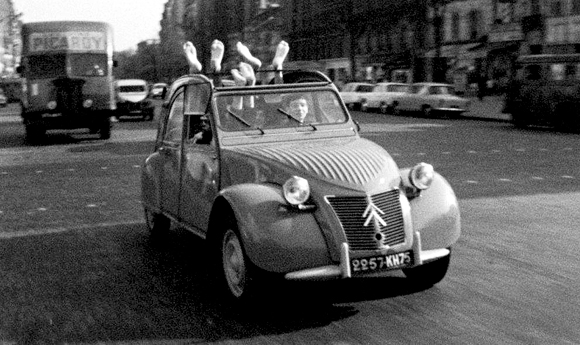 Marker and Lhomme’s interviewing technique may seem formulaic at first with interview subjects being asked similar questions. But often their responses trigger more probing questions that reveal racial tensions, frustrations over a rigid class system and dysfunctional bureaucracy or a general social myopia about the changing world around them. A men’s clothes salesman complains that he has become a workaholic because of his nagging wife’s demands for more money. A newlywed couple look forward to a happy future without apparent fears or anxieties even though the young husband (an enlisted soldier) is about to be sent to Algeria. A married couple with nine children living in a one room hovel are overjoyed at receiving news from the city housing authority that they have been approved for relocation to a slightly larger apartment. An African immigrant describes how the priests at his school tried to convert him to Catholicism by denigrating the religious beliefs of his native land which he had practiced since childhood. A teenage boy reveals his desired career path of working in an auto shop. Is that the height of your ambition the filmmakers ask to which the boy adds he might work his work up to assistant manager before finally becoming the auto shop owner. And then what?, the interviewer inquires further. The boy looks puzzled as if there is no further advancement possible. Perhaps a blue collar job as a gas station attendant really is his goal but this is just one of many interviews that suggests that some French working class people were conditioned to think of their career options in terms of class hierarchy.

It’s an endlessly fascinating but not always positive portrait of a nation on the cusp of major change. The turbulent nature of the mid-to-late sixties with riots, demonstrations, political upheaval and more is bubbling just under the surface here, soon to explode. If an American filmmaker had set out to capture the opinions of say, random people on the streets of New York in 1963, would the outcome have mirrored this same sense of fragmentation and lack of national unity? It’s hard to say but it would be hard to match Marker and Lhomme’s sheer artistry.

Despite the seriousness of the topics discussed, there is a casual, almost upbeat tone to Le Joli Mai which often finds ironic humor in juxtapositions like nightclubbers doing the Madison followed by Parisians at another dance club doing the twist. The off-the-cuff cinematography by Lhomme, Denys Cleval, Etienne Becker and Pierre Willemin is still fresh, bracing and alive to the moment. A public demonstration by hundreds of people conducted in complete silence in a central square in homage to eight people killed by the police in a Paris Metro attack is one of several powerful and affecting sequences. Even though the film was made fifty years ago, many of the same problems are still with us and that infuses Le Joli Mai with a kind of timeless universality.

Featuring a music score by Michel Legrand, Le Joli Mai is divided into two sections; Part 1, “A Prayer from the Eiffel Tower” explores the personal attitudes and emotional state of people on the street, while Part 2, “The Return of Fantomas,” focuses more on political and social issues. Icarus Films has recently released Le Joli Mai on DVD in the 146 minute, re-edited version from Marker that features a choice of either English narration by Simone Signoret (this was the version screened at VFF) or French narration by Signoret’s husband, Yves Montand. The disc also comes with various Direct Cinema shorts by either Marker or Lhomme and 17 minutes of deleted material from the original release of Le Joli Mai.