Allegedly, WAR IS HELL was on the screen when Oswald entered the theatre around 1:40 p.m. though reports on his arrival time vary. He had been followed to the theatre – where he entered without paying – by a shoe store clerk next door who had noticed his suspicious behavior after hearing an all-points bulletin from the police. The shoe store clerk, alerted the ticket seller who made an emergency phone call and within minutes at least 30 police squad cars arrived on the scene.

The theater house lights were turned on and Officer Maurice N. McDonald was the first to confront Oswald, who was sitting at the back of the theater in one of the last three rows. McDonald said he heard Oswald mutter, “Well, it’s all over now,” before striking him with his fist. A shuffle ensued and Oswald was soon handcuffed and taken into police custody in what must have been one of the strangest interruptions to ever occur during a show at the Texas Theatre.

Since President Kennedy had been shot at approximately 12:30 p.m. that day, the patrons in the theater (reportedly less than 15) were probably completely unaware of what was happening outside since they were already at the matinee. I also have to wonder what was flashing through Oswald’s mind as he stared at WAR IS HELL, the feature in progress. Conspiracy theorists surmise that The Texas Theatre was a pre-determined meeting place after the shooting for Oswald and another conspirator. One thing is fairly certain though; Oswald had no inkling that WAR IS HELL would be the last movie he would ever attend. 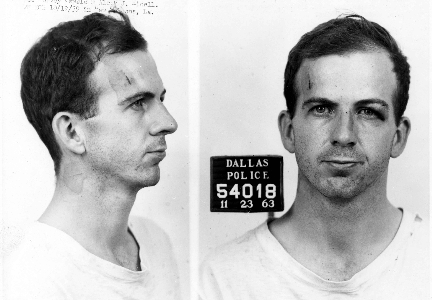 When I was working on Joe Bob Brigg’s Monstervision franchise for TNT in the ’90s, circa 1996-97, we would often fly out to Dallas for the production shoots. Although we rarely had extra time to explore Dallas, we did make it to the Sixth Floor Museum in the former Texas Book Depository and the Conspiracy Museum (now closed) in the Katy Building (just across the street from the Kennedy Memorial). We even drove past the Texas Theatre which was closed due to a fire that had gutted it in 1995.

The boxoffice at the Texas Theatre in Dallas

The art deco theater first opened in 1931, amid a public ceremony presided over by billionaire Howard Hughes, and was touted as “the first air-conditioned theatre in Dallas.” The Texas eventually shut its doors in 1989 due to decreasing attendance and city residents’ flight to the suburbs where moviegoers preferred the multiplex experience to the single screen one.

The Texas Theatre in the 1930s

The Texas Theatre Historical Society (TTHS) raised money to keep it from the wrecking ball and Oliver Stone was allowed to remodel the exterior for use in his 1990 film, JFK. Then, in 1992, a former usher at the theatre, Don Dubois, took over the lease from TTHS, only to see the Texas completely gutted by a fire in 1995.

The Texas Theatre as it appears today (photo by Mona Reeder, Dallas News)

It was added to the National Register of Historic Places in 2003 and was occasionally used for special events but reopened to the public after a major refurbishing in 2010 under the ownership of Aviation Cinema. It now functions as an art house cinema. The seat where Oswald sat (the fifth row from the aisle in the third to last row) has been immortalized as you can see here.

To get a more detailed history of the Texas Theatre, check out this link http://www.unvisiteddallas.com/archives/2217

In an appropriate twist of fate, the theatre was chosen in 2007 to host a screening of Robert Stone’s fascinating documentary about the lone gunman, OSWALD’S GHOST, which was originally broadcast on PBS.  If you visit the Texas Theatre website today (11-22-2013), you’ll see that they are paying tribute to their past with, appropriately enough, a double feature of WAR IS HELL and CRY OF BATTLE. For better or worse, the Texas Theatre will be forever linked with Oswald and the JFK assassination. And so will the last movie Oswald saw.

I sometimes wonder what my last picture show will be.

The Texas Theatre interior circa the ’60s