Who was Nikola Tesla? Some people know him as the scientific genius who created the alternating current (AC) electrical system which became the industry standard instead of Thomas Edison’s direct current (DC) electrical system. Tesla is also credited with developing the first X-ray films known as shadowgraphs, inventing the Tesla coil which became the basis of modern radio technology, designing the first neon sign and holding the patents for more than 250 inventions which have improved the quality of human life. Such brilliance comes with a price and the Croatian-born immigrant was also an eccentric with no talent for profitable self-promotion or successful business ventures which often affected his career adversely. Sounds like a fascinating subject for a film, right? Director/screenwriter Michael Almereyda thought so too and his 2020 movie Tesla featuring Ethan Hawke in the title role, is currently in release but be forewarned, this is NOT a conventional biopic by any stretch of the imagination. 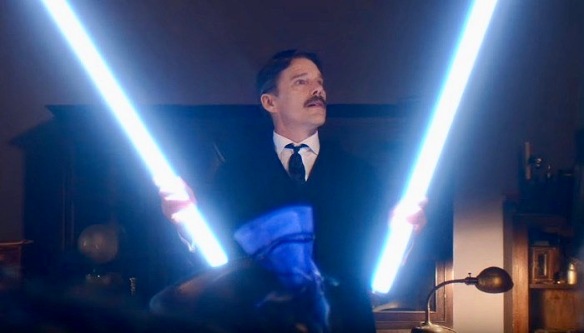 Almereyda dispenses with a traditional chronological approach and mostly concentrates on the inventor’s peak years between 1884 and 1905, cherry-picking key events to dramatize and ponder. Real facts are mixed with playful “what if” scenarios such as an imagined confrontation between Tesla and Edison involving ice cream cones. The look of the film is also eclectic and comes across more like a filmed off-Broadway play with multi-media flourishes than a realistically rendered period piece. Actors appear in front of large, projected slides at times such as a mountain or a landmark like Niagara Falls instead of actual locations. But Almereyda also creates some dazzling cinematic set pieces like Tesla’s experiments with lighting and high voltage at his Colorado Springs outpost; it seems inspired by 1931’s Frankenstein, where Colin Clive brings his creature to life. 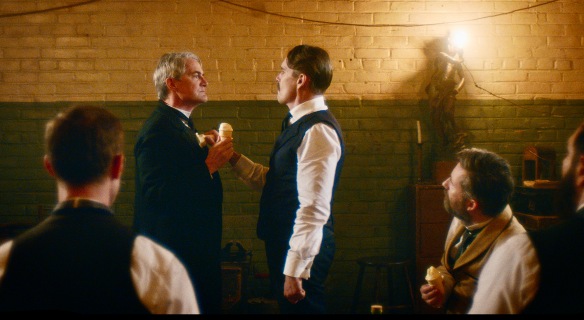 Another departure from the traditional biopic is the absence of a love interest for the protagonist. In real life, Tesla was a confirmed bachelor with no interest in a wife or even relationships with women but that normally wouldn’t stop a filmmaker from inventing one. It was true that Anne Morgan, daughter of the famous financier J.P. Morgan, was infatuated with Tesla but nothing came of it. Almereyda actually uses the non-affair to his advantage, making Anne (played by Eve Hewson), the off-and-on narrator of Tesla, who occasionally breaks the fourth wall as she confides in the viewer. Through her we get some much needed biographical detail as well as observations about the inventor, his achievements and failures. 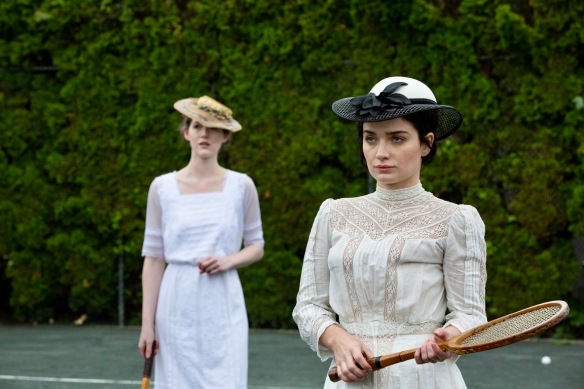 The other aspect of Tesla that is going to irritate some is the director’s amusing use of anachronisms. When the movie opens, our narrator is doing a Google search for Tesla on an Apple computer. Later, in one of the most unexpected scenes, Hawke grabs a microphone from off-screen and begins singing a world-weary rendition of the Tears for Fears pop hit, “Everybody Wants to Rule the World.” The lyrics actually convey some of the inventor’s longings as he truly wanted to elevate mankind through his inventions. 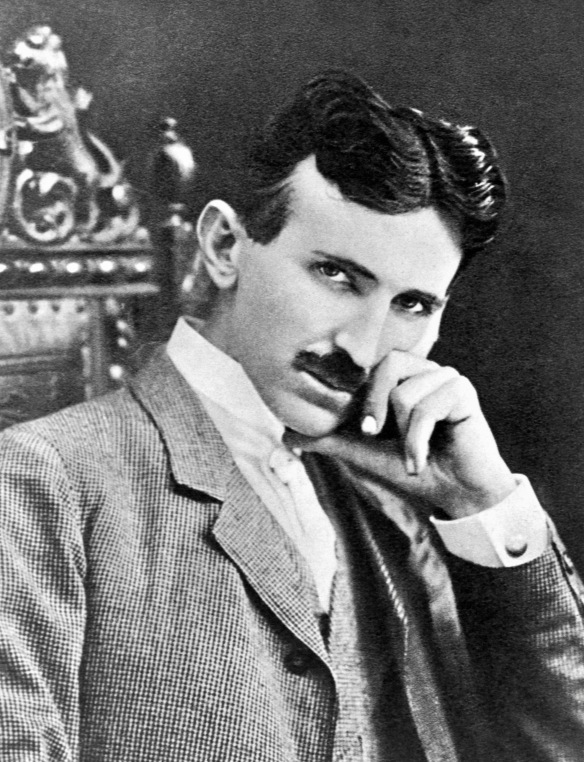 As the title character, Ethan Hawke has the unenviable task of bringing this brilliant but somewhat cerebral character to life and Almereyda, who also wrote the screenplay, seems more interested in Tesla’s ideas than his personality. As a result, Hawke wanders through the film with a worried brow and a sense of being overwhelmed by his own brilliance. He does experience a few moments of joy and even addresses some of Tesla’s eccentricities in low-key ways such as a superstitious fear of pearls or his germ and dust phobias. (In one scene, we see him obsessively wiping down all the glassware at a restaurant table setting).

Jim Gaffigan has an expanded cameo role as inventor/industrialist George Westinghouse in Tesla (2020), an offbeat biopic by Michael Almereyda.

Yet, none of this is enough to make Hawke’s Tesla particularly engaging or even an interesting screen presence and he is easily overshadowed by the more colorful, larger than life historic figures who cross his path like Thomas Edison (Kyle Maclachlan) and George Westinghouse (Jim Gaffigan) and some who might have such as the seductive but enigmatic Sarah Bernhardt (Rebecca Dayan). Luckily, these supporting players create vivid cameos and Almereyda touches on enough intriguing incidents in Tesla’s life to whet your appetite for more such as the inventor’s connection to axe-murderer William Kemmler, the first man to die in the electric chair. 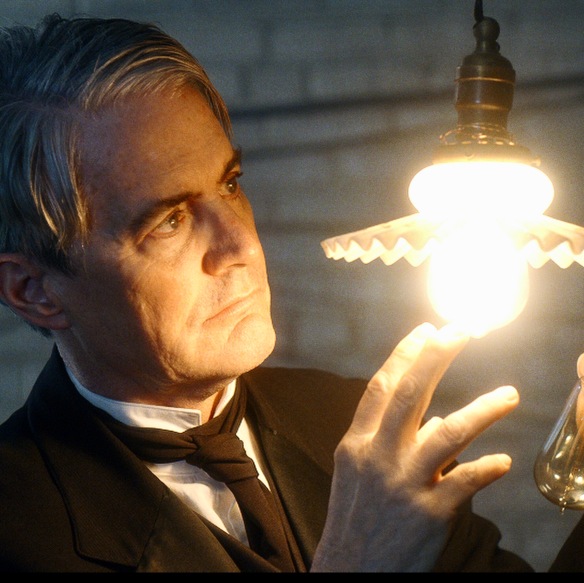 In the end, Tesla is probably not going to be Almereyda’s commercial breakthrough to a wider audience. Those who have followed his career since the late eighties know him as a highly original, unorthodox indie director with a distinct style of his own. It was apparent in his debut feature Twister (1989) about an oddball family in Kansas and has become more pronounced and confident as the years pass. Nadja (1994, a hypnotic urban vampire tale, was the first of his films to attract major attention on the art film circuit and his contemporary takes on two works by Shakespeare with Ethan Hawke in the leads – Hamlet (2000) and Cymbeline (2014) are audacious adaptations if nothing else. Experimenter (2015), a disturbing account of social psychologist Stanley Milgram and his 1961 Yale experiments, might be Almereyda’s most critically acclaimed film to date and fans of the director will most likely applaud his anti-biopic approach to Tesla.

I suspect that the definitive film about Tesla is still waiting to be made even though there are numerous documentaries and movies about him already with several more in production (check IMDB and you’ll be surprised at the number). The Secret Life of Nikola Tesla (1980), a documentary by Krsto Papic, and The Tesla Files (2018), a series produced for the History Channel, have their advocates but Alfonso Gomez-Rejon’s The Current War (2017), the story of the Thomas Edison-George Westinghouse rivalry, was a critical and boxoffice failure. Tesla has even popped up as supporting characters in other movies like Christopher Nolan’s The Prestige (2005), in which he is portrayed by David Bowie.

David Bowie as famous inventor Nikola Tesla in The Prestige (2006).

My final word on Almereyda’s Tesla is that the film inspired me to conduct further research on the subject and when you leave a movie wanting to know more, that’s always a good thing.

Tesla is currently playing in selected theaters and available as video on demand from some providers like Amazon Prime.