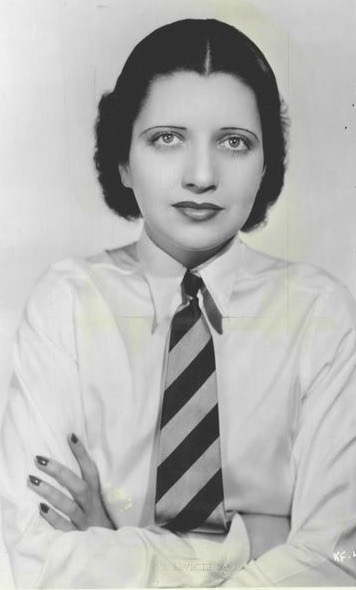 Kay Francis was the most glamorous and popular actress on the Warner Bros. lot in the early 1930s.

By 1935 Kay Francis was at the peak of her film career and the highest paid actress on the Warner Bros. lot. While her image as a chic and stylishly dressed sophisticate eventually worked against her, obscuring her genuine talent as an actress, Francis was amazingly prolific in the early sound era, averaging four to five movies a year opposite such dashing leading men as Ronald Colman (Raffles, 1930), William Powell (Ladies’ Man, 1931), Joel McCrea (Girls About Town, 1931), Fredric March (Strangers in Love, 1932), and Herbert Marshall (Trouble in Paradise, 1932). 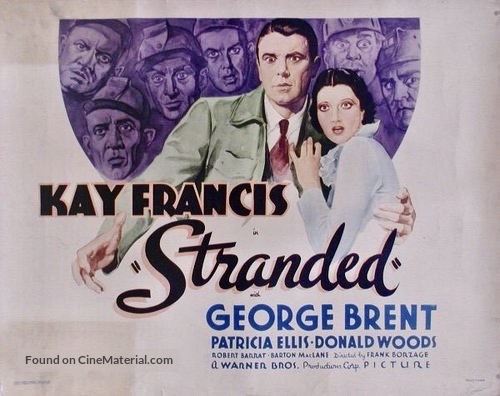 Despite the often clichéd and formulaic scripts she was given by the studio, which were mostly soap operas, tearjerkers and romantic dramas, Francis still managed to display her versatility in a variety of films that deserve to be better known today such as the delightful caper comedy Jewel Robbery (1932), the exotic Pre-Code melodrama Mandalay (1934) and the offbeat espionage thriller British Agent (1934). But there are plenty of lesser known efforts in her filmography that deserve rediscovery and one of the most intriguing is Stranded (1935), a curious blend of romance, New Deal optimism, and crime drama directed by Frank Borzage and pairing Francis with George Brent, who first appeared with the actress in The Keyhole (1931). (Brent would soon become Bette Davis’s leading man of choice at Warner with that actress replacing Francis as the queen of the lot). 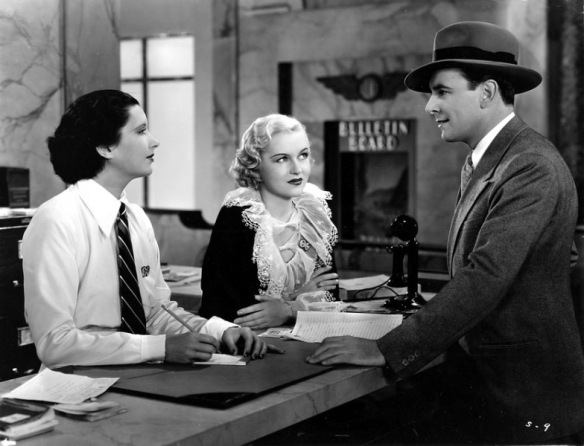 In Stranded, Francis plays Lynn Palmer, an employee in the San Francisco branch of the Travelers’ Aid Society, a charitable organization which was first formed in St. Louis, Missouri in the 19th century to aid travelers and immigrants who became stranded during their journeys. Lynn is dedicated to her work and fulfilled by it but experiences some friction in her life when she agrees to let Velma (Patricia Ellis), the spoiled daughter of a rich socialite, work with her and share her apartment. The relationship between the two women becomes increasingly strained when both women vie for the attention of Mack Hale (George Brent), the superintendent of the Golden Gate Bridge project, who comes to Travelers’ Aid in search of a missing steel worker. Upon first meeting the sparks fly between Lynn and Mack and they appear to be an ideal match…except for their opposing ideologies. As their mutual attraction escalates into a passionate battle of the sexes, Mack also becomes embroiled in a war against corrupt racketeers who try to force him to pay protection from the mob on his bridge construction. 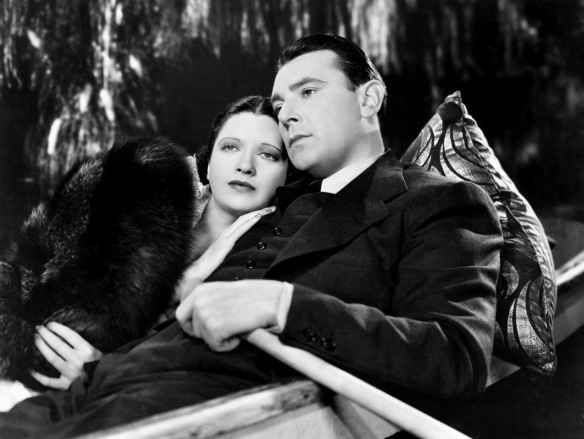 Lynn (Kay Francis) and Mack (George Brent) fall in love and plan to marry but he wants her to give up her work to be a housewife in Stranded (1935).

Despite its episodic structure and multiple subplots, Stranded offers an unmistakably feminist point of view (for a Hollywood movie) in its depiction of Lynn and her unyielding commitment to her work and career. Despite her great love for Mack, she can’t understand why she should give up her volunteer work to become a full time wife. Mack, on the other hand, has little sympathy for the helpless and homeless recipients of the Travelers’ Aid program and only respects those who are self-motivated and work hard for a living. He can’t comprehend her refusal to quit the organization, saying, “There’s work to be done. Work so hard that I need all of you when I come home. What kind of life would we have if one night I’m working and the next night you’re working and the next night we’re both all in? You won’t have to be mixed up in this useless madhouse job of yours.” 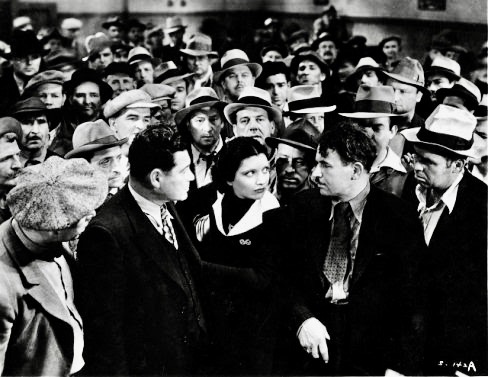 Lynn Palmer (Kay Francis) saves the day by resolving a protest from her boyfriend’s employees over the building of a bridge in Stranded (1935), directed by Frank Borzage.

Although it might not rank among the best films of that great romanticist of the cinema, Frank Borzage, who gave us 7th Heaven [1927), Street Angel (1928) and Man’s Castle (1933), Stranded (1933) represents a favorite thematic concern of the director – the transformative power of love and how it can triumph over adversity. In this case, Lynn and Mack are two strong willed, fiercely independent people who discover a more complete and desirable identity through their romance. Class differences and the social and political climate of the time were also concerns for the director as well (note the rise of fascism depicted in Three Comrades [1938] and The Mortal Storm [1940]) and Stranded is no less a reflection of its era with the Great Depression and FDR’s New Deal programs anchoring the film in reality. 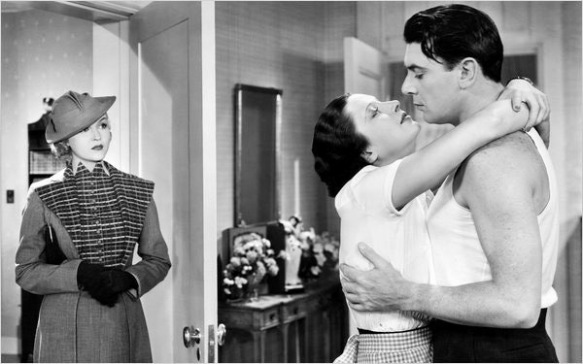 Velva (Patricia Ellis in doorway) is annoyed to see her roommate Lynn (Kay Francis) embracing the man of her dreams (George Brent) in the 1935 romantic drama, Stranded.

Based on the story “Lady with a Badge” by Frank Wead and Ferdinand Reyher, the studio decided that title might lead audiences to expect a movie about a policewoman and changed the name to Stranded. The film was also an attempt to capitalize on the building of the San Francisco-Oakland Bay Bridge (it wasn’t completed until 1936) and allegedly Borzage shot some on-location footage of the Bridge that was incorporated into this movie. Borzage’s younger brother, Lew, served as assistant director on the film as he would on many of his brother’s feature films.

For Kay Francis, Stranded was little more than a routine assignment from her studio but it did introduce her to Delmer Daves, a former property boy turned aspiring screenwriter; it marked the beginning of a long but discreet affair between them. According to Daves in Loretta, Ginger and Irene Who? by George Eells, “Hal Wallis was production head at Warner Brothers during the thirties, and it was he who was Mr. Fate with Kay and me – for he asked me, as a favor, since the writer of Kay’s next film had left the lot, to go to her house and rewrite all the lines of the script that had the embarrassing r’s which Kay would turn into w’s in most instances – such as ‘tomowwow’ for ‘tomorrow.’ I hadn’t even met her at that time, went to her house, introduced myself and….we hit it off so well I never left, and we were devoted to each other solely for the next three years, traveling together between films….During those years Hedda [Hopper] and Louella [Parsons] (both close friends of ours and very tactful in their reportings of our wanders, etc.) would make us Best Bets in their annual Matrimonial Derby columns.” Francis, who had previously been married four times, would tie the knot with husband number five Eric Barnekow in 1939 while Daves would go on to become a highly successful screenwriter and director, who was especially well-known for his Westerns (Jubal [1956], 3:10 to Yuma [1957], The Hanging Tree [1959]).mmm 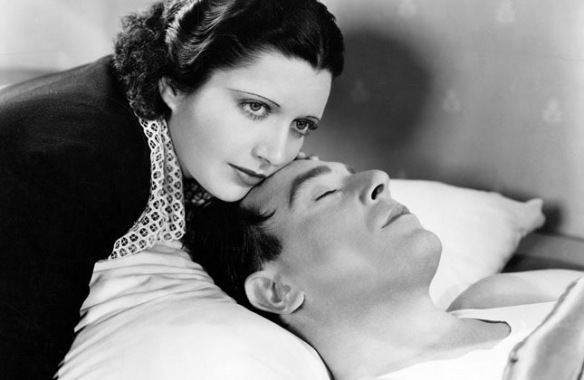 Lynn (Kay Francis) makes a decision to save the work of her engineer boyfriend (George Brent) from being sabotaged by racketeers in Stranded (1935).

Stranded was promoted as a “women’s picture” and didn’t disappoint fans of the actress who enjoyed her high class, fashion conscious heroines. The following comments by The New Yorker reviewer was typical of the film’s critical reception: “In Stranded, Kay Francis, known to filmgoers as one of the best-dressed women, appears as a social worker, a prominent executive of the Travelers’ Aid…The movies are finding a silver lining ready for them in the labor disputes of the day. Many a plot hangs upon them now, and the agitators may reflect upon the wealth their activities yield to the magnates of Hollywood. The mass meeting in this picture gives Miss Francis a chance, naturally, to run to the front and harangue the men, in a trim tailleur from her celebrated wardrobe. It is after she has calmed their ruffled spirits that she decides to yield to love, to the relief of all who have been agonized by the suspense of her predicament.” The reviewer seems to have missed the point, however, that Francis’s character has not given up her principles or job for marriage. The fadeout of Stranded makes it obvious that the marriage of Lynn and Mack will be a successful one because they have each other AND their careers. It’s an unusually modern ending for a Hollywood romantic drama in the thirties and still topical today. 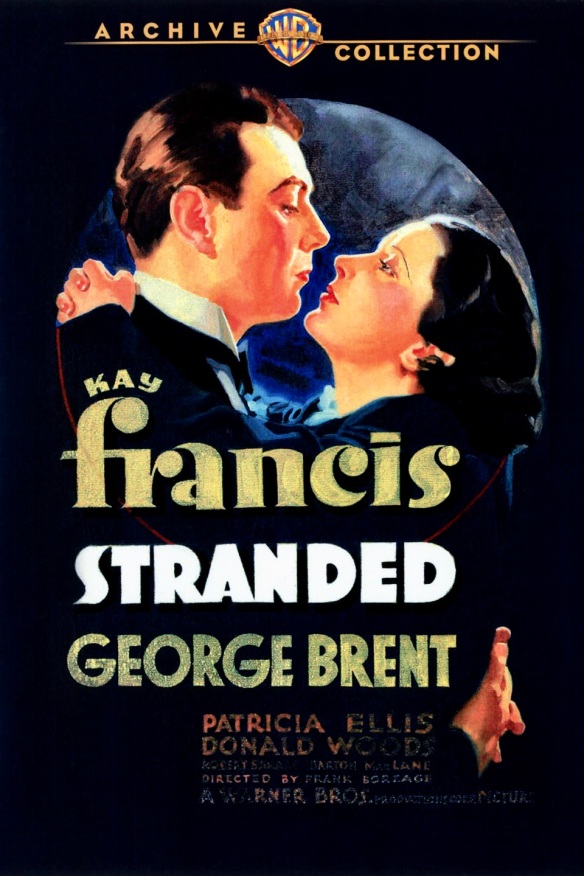 Stranded was released by the Warner Archive Collection in November 2010 as a stand alone DVD-R with no extra features and is still your best option if you want to purchase the view or view it. 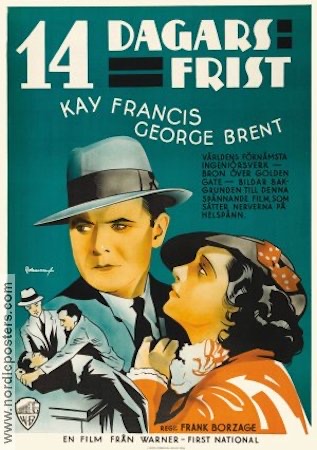