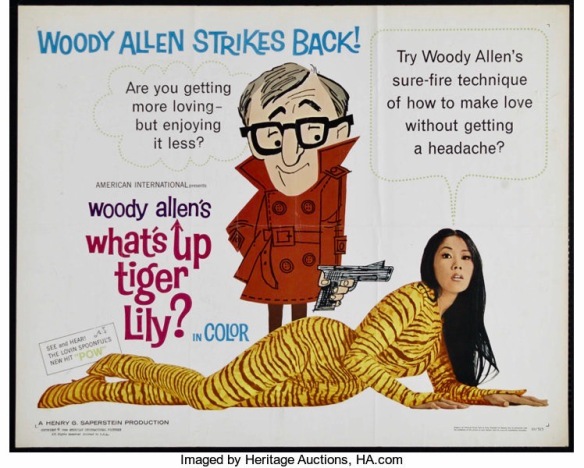 By today’s standards, it doesn’t seem like such a novel movie concept — take a low-budget film, re-dub the soundtrack adding new dialogue, music and sound effects, and create an entirely new experience. You can trace pioneers in this technique back to the syndicated TV series Fractured Flickers hosted by Hans Conried in the early sixties and maybe even before that (Fractured Flickers took silent movies and gave them new soundtracks with voices, sound effects and music). Certainly one of the more famous practitioners of this idea is Woody Allen, who explored the possibilities of redubbing found footage – in his case, a Japanese spy movie – with What’s Up, Tiger Lily? (1966).

The concept didn’t stop there. The surreal comedy troupe Firesign Theater created a madcap storyline using clips from Republic Studio serials, added a new dialogue and music track and released it as J-Men Forever in 1979. A decade later, the Mystery Science Theatre 3000 gang begin dabbling in similar territory, inserting their presence into films like This Island Earth (1954) and Manos: The Hands of Fate (1966), while providing a steady stream of wisecracks and insults to accompany the original soundtrack. A more recent example includes Kung Pow: Enter the Fist (2002), in which writer/actor/director Steve Oedekerk reworked a 1977 martial arts movie entitled Savage Killers and turned it into a goofy parody of the genre. 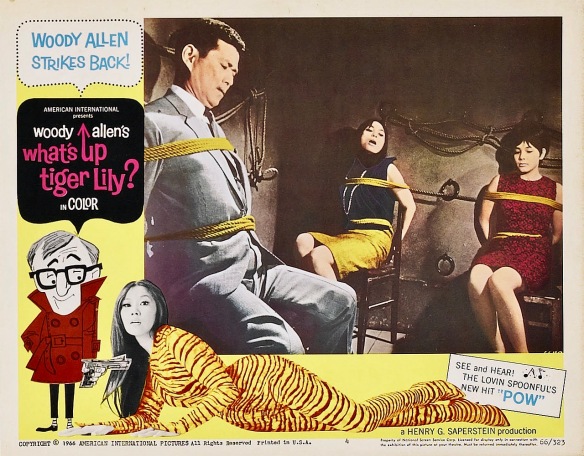 Still, I tend to favor What’s Up, Tiger Lily? over other examples of the form because of my love of Japanese sixties cinema, the music of The Lovin’ Spoonful, and the chance to see Woody Allen in an embryonic stage in terms of developing and directing his own material. The result is a crazy-quilt concoction that is alternately nonsensical, stupid, tedious and occasionally hilarious. You might hate it but some film critics took the bait and loved it. Sight and Sound magazine proclaimed it “a frantic counterpoint of sound and image as deliriously silly as a Tex Avery cartoon…this inspired screwball one-off remains as fresh as the day it was born.”

The story behind the creation of What’s Up, Tiger Lily? is as twisted as the movie. On the strength of his success as the screenwriter of What’s New, Pussycat? (1965), a surprise box-office hit, Allen was offered an unusual project — to write comic dialogue for a Japanese spy thriller entitled Kokusai Himitsu Keisatus: Kagi No Kagi (1965, International Secret Police: Key of Keys). American International Pictures, the distributor, had already created an English-dubbed version of the film, but when it was previewed before audiences it provoked intermittent gales of laughter. Many U.S. reviewers would later claim that Key of Keys was an inferior B-movie that deserved to be re-dubbed but this wasn’t really the case. With a plot about missing microfilm and international spies, Key of Keys was a highly successful commercial hit in Japan and the fourth installment in a five-film series starring Tatsuya Mihashi as secret agent Jiro Kitami. It was also intended as a playful parody of the genre.

Before Woody Allen entered the picture, however, producer Henry G. Saperstein approached another comedian to write the new dialogue – Lenny Bruce. When informed that he couldn’t use obscenity in the film, Bruce passed on the project and Saperstein decided to offer it to Allen after seeing his nightclub act. In case you aren’t familiar with Saperstein, he was the owner of UPA Productions, the animation outfit that introduced us to Mister Magoo, Gerald McBoing Boing and other popular characters. He also acquired the licensing rights to Gojira (1954), which was dubbed in English, re-edited with new footage featuring Raymond Burr and released here in 1956 as Godzilla, King of the Monsters.

Saperstein had an excellent relationship with Toho Studios after his successful release of Godzilla so he didn’t want to jeopardize his relationship by refusing to distribute Key of Keys, Toho’s top recommendation for the U.S. market. In an interview with The Los Angeles Times, Saperstein recalled, “It was a slick, James Bond-type film…very well done, except everyone was Japanese. I said to myself, ‘You dummy, what will you do with this? Audiences will laugh you right out of theaters.’ But what do you do when you think someone might laugh at you? You beat them to the punch. I decided to do our own spoof.” Allen’s genius for one-liners and stand-up comedy were already well known in the industry and he soon focused all of his attention on the re-editing and re-dubbing of Key of Keys. (Some sources claim that footage from the third film in the series, International Secret Police: Keg of Gunpowder (1964), was also used in What’s Up, Tiger Lily?). 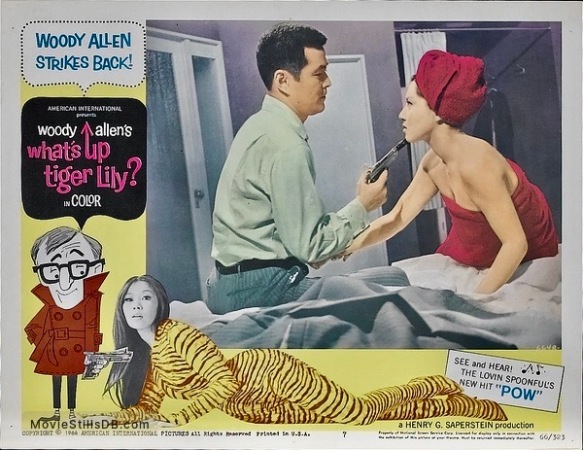 Operating on a limited budget of $75,000, Allen and several actors, including Louise Lasser, Frank Buxton and Lenny Maxwell, holed up in a room at the Stanhope Hotel in New York City and screened the film several times, compiling jokes, one-liners and funny dialogue which were then worked into the script. The new plot centers around Phil Moscowitz, a Japanese imitation of James Bond, who is on a quest to find the world’s greatest egg salad recipe, before it falls into the wrong hands.

Kumi Mizuno plays one of the seductive female spies in Key of Keys which was re-edited as an English-dubbed nonsensical comedy by Woody Allen – What’s Up, Tiger Lily? (1966).

The outrageous incongruity of the whole enterprise is heightened even further by the ethnic New York accents (Allen, Lasser, screenwriter Mickey Rose and others provided the voices) emanating from the mouths of the Japanese cast. Typical of the film’s humor is the scene where a scantily clad female spy, wearing a raincoat, sneaks up on a male adversary and flashes him as she says, “Quick, name three presidents.”

After re-dubbing the dialogue, Allen still felt that the movie needed some padding so he added a few comic inserts featuring himself and a handful of sight gags, bringing the running time to barely over an hour. You’ll notice that Allen makes four appearances in What’s Up, Tiger Lily?: first as an animated character in the title sequence, then as an interview subject, later as a superimposed silhouette on the screen, and finally as an observer to a striptease performed by former Playboy centerfold China Lee (the real-life wife of comedian Mort Sahl). 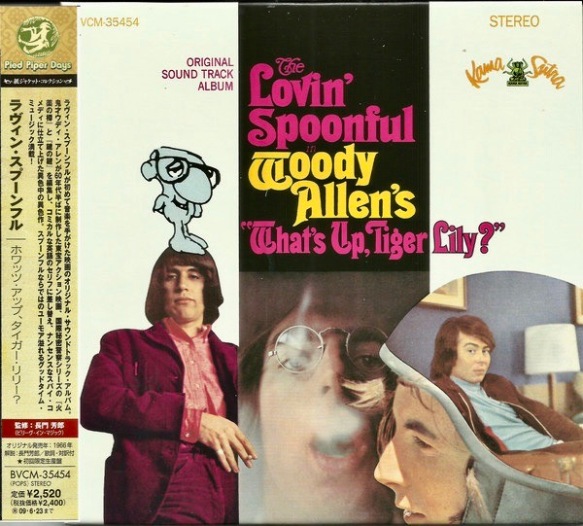 After Allen left the project, the producer felt that the running time was still too short and stepped in to add additional scenes and several musical interludes featuring the top-forty hitmakers The Lovin’ Spoonful, who perform “Fishin’ Blues,” “Respoken,” “Pow,” and other tunes. Allen was so angered by Saperstein’s meddling with the project that he sued him and tried to halt the picture’s release. His attitude changed though once the reviews began to appear and several mainstream critics actually praised the movie’s sense of lunacy and comic invention.

What I particularly love about What’s Up, Tiger Lily? is being able to see Key of Keys, even in its re-edited new form with English dubbed dialogue. You can see that the original Japanese film was a stylish, sexy spy thriller. The director was Senkichi Taniguchi who helmed other Japanese cult films like The Lost World of Sinbad (1963) and The Gambling Samurai (1960). Key of Keys also had an exceptional cast featuring some of the biggest names in Japanese genre films. The film’s hero played by Tatsuya Mihashi had appeared in The Human Vapor (1960) and Blueprint of Murder (1961) but also in prestige productions like Akira Kurosawa’s The Bad Sleep Well (1960) and Hiroshi Inagaki’s Chushingura (1962). 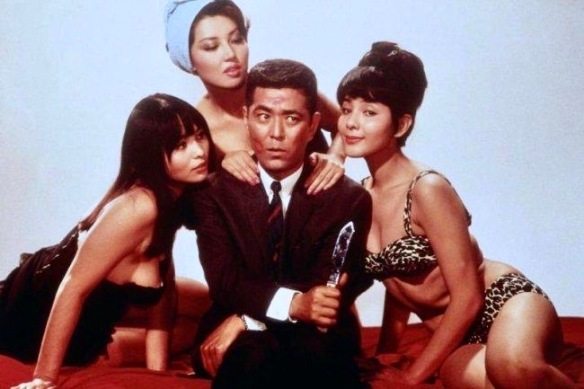 The original cast of Key of Keys, which would become the basis for the Woody Allen comedy spoof What’s Up, Tiger Lily? (1966) stars (from left to right) Akiko Wakabayashi, Kumi Mizuno, Tatsuya Mihashi and Mie Hama.

The three female leads – Akiko Wakabayashi, Mie Hama and Kumi Mizuno – would also become famous on an international scale due to their appearances in some key films of the sixties. Both Wakabayashi and Hama star in the James Bond adventure You Only Live Twice (1967) opposite Sean Connery and then there are the sci-fi/horror fantasies; Wakabayashi is featured in King Kong vs. Godzilla (1962), Dogora, the Space Monster (1964) and Ghidorah, the Three-Headed Monster (1964) while Hama appears in The Lost World of Sinbad (1963) and King Kong Escapes! (1967) and some of the aforementioned films with Wakabayashi.

Kumi Mizuno plays one of the doomed shipwreck survivors on an island of strange fungi in Matango (1963) aka Attack of the Mushroom People.

As for Kumi Mizuno, she was a popular poster girl pin-up for Toho fantasy films of the sixties with memorable parts in Gorath (1962), Matango aka Attack of the Mushroom People (1963), Frankenstein Conquers the World (1965), Invasion of Astro-Monster (1965) and The War of the Gargantuas (1966).

If nothing else, What’s Up, Tiger Lily? launched Allen’s directorial career and is a crude blueprint of his humor and comic obsessions, which would begin to flower in Take the Money and Run (1969), his first critical and popular success as a director. It was also during the making of What’s Up, Tiger Lily? that Allen married his fellow collaborator, Louise Lasser, who would later score a hit as the title character in the TV soap opera parody, Mary Hartman, Mary Hartman (1976).

What’s Up, Tiger Lily? has been released on VHS and DVD in several editions over the years but the 2003 DVD release from Image Entertainment is probably the best known version. It would be great if some distributor could release a special edition of What’s Up, Tiger Lily? with Key of Keys on Blu-Ray with supplements and English subtitles for the Japanese film.