Film scholars generally agree that the silent era offerings (Entr’acte, Le Voyage Imaginaire) and early sound films of Rene Clair (Under the Roofs of Paris, Le Million) are the French writer-director’s finest work and deserve their exalted position in the history of cinema. But one shouldn’t discount the movies Clair made during his brief tenure in Hollywood from 1941 to 1945 where his subtle wit, sophistication and visual style were second only to the work of Ernst Lubitsch. The Flame of New Orleans (1941) with Marlene Dietrich and I Married a Witch (1942) starring Fredric March and Veronica Lake are delightful romantic comedies while And Then There Were None (1945) is an inventive adaptation of Agatha Christie’s thriller, Ten Little Indians. Much more underrated and lesser known is Clair’s It Happened Tomorrow (1944), which returns to the fantasy realm of earlier work like The Ghost Goes West (1935) and I Married a Witch.

It Happened Tomorrow opens with the framing device of a golden wedding anniversary celebration where the couple, Larry and Sylvia Stevens (Dick Powell and Linda Darnell), recall a miraculous event that occurred fifty years earlier. In flashback, a tale unfolds in which Larry, an obituary writer for the Evening News, complains to co-workers about his unexciting position and wishes he could see into the future so he could use his prophetic talent to become the paper’s top reporter. 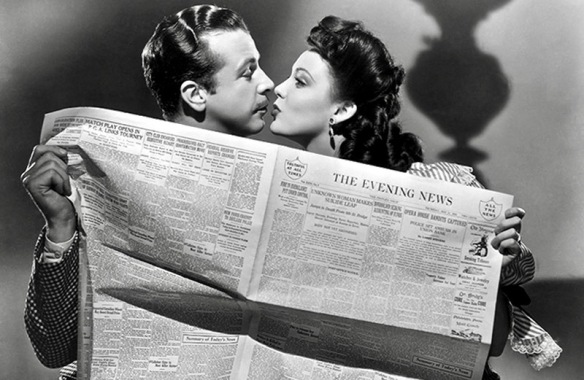 He gets his wish, granted by a guardian angel who remains anonymous at first, and achieves almost instant success which confounds him almost as much as it does his employer and rivals. As expected, his gift for predicting the future comes with its own set of complications and when he learns of his own death in the line of work, he finds himself powerless to change the course of events despite a valiant effort.

Initially, Clair had hoped to cast Cary Grant in the role of the reporter Larry Stevens, a part that eventually went to Dick Powell who was just about to break away from his screen persona as a leading man of lightweight musical-comedy films. Just a few months after It Happened Tomorrow, Powell would go for a tougher, much grittier screen image starting with his hard-bitten take on detective Philip Marlowe in Murder, My Sweet (1944), followed by several other first rate film noirs including Cornered (1945) and Pitfall (1948).

The screenplay credit for It Happened Tomorrow lists both Rene Clair and Dudley Nichols and a notation that it was “based on originals by Lord Dunsany, Hugh Wedlock and Howard Snyder, and ideas of Lewis R. Foster, with additional dialogue by Helene Fraenkel.” According to Clair, the acknowledgement of various contributions was due to the fact that “In Hollywood, they are very cautious about story ideas because of the legal entanglements that can ensue if you get caught copying — or even appearing to have copied. What happened here illustrates that point. In the early forties, Frank Capra had bought a screenplay…from two writers. Before he went any further on the project, he had the legal department research the property. They went over everything they could think of, and finally they came to just the sort of thing they had been looking for. It was in a one-act play by Lord Dunsany that had been put on in London by Ronald Colman in the early twenties.” 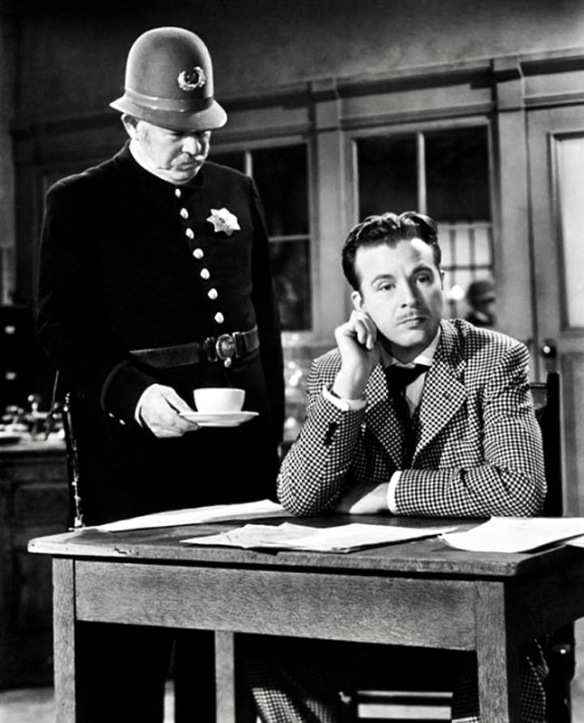 Dick Powell (right) plays a newspaperman who can see into the future in Rene Clair’s fantasy/comedy, It Happened Tomorrow (1944).

“The two scripts had the same device: the possibility of reading tomorrow’s newspaper today. Since Capra knew very well that the Dunsany estate could have made trouble for him, he bought the rights from them…Eventually Capra sold the rights to [producer] Arnold Pressburger, who asked me to take over the project. At first I refused, but then I reconsidered and Dudley Nichols and I redid the whole script from scratch. Even so, those two scriptwriters and Lord Dunsany got their screen-credit for the ‘original material.'” (from The Films of Rene Clair by R.C. Dale).

In writing their version of the screenplay for It Happened Tomorrow, Clair and Nichols decided to avoid any mention of the current World War and set the picture in the 1890s. They also altered the original concept of Dunsany’s play in which the reporter made a deal with the Devil, instead of being granted his wish by a recently deceased newspaper employee.

Linda Darnell and Jack Oakie appear in this publicity still from Rene Clair’s It Happened Tomorrow (1944).

The collaboration between Clair and Nichols was a good one though Clair admitted that his partner’s “power of concentration was such that we could work nine hours at a stretch and talk of nothing other than It Happened Tomorrow. I’ve never known a worker like him. So, in three weeks the decoupage and dialogue were finished. But the mental tension that he demanded of me was such that I was dead tired.” (from Rene Clair: Un maitre du cinema by G. Regent and R. Charensol). 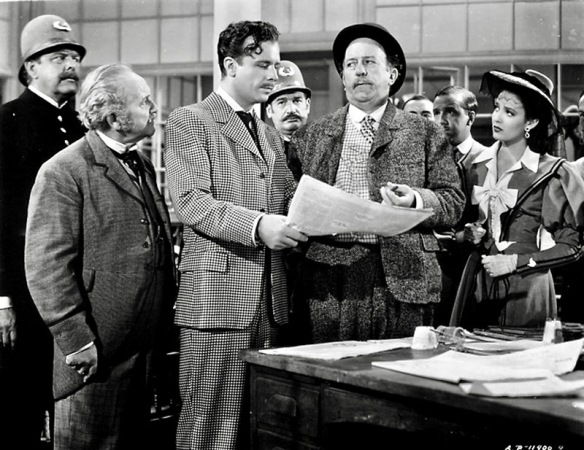 Clair was never particularly fond of It Happened Tomorrow although he did admit that, “The last twenty minutes are the best thing I did in Hollywood.” Nevertheless, the film was a popular success for United Artists and garnered two Oscar nominations; one for Best Music Scoring (by Robert Stolz) and one for Best Sound Recording.

Most reviewers were favorable in their assessment of the film, though many, such as James Agee in his review, preferred Clair’s earlier, more innovative French films, writing “Students of cinematic style will find many shrewdly polished bits in It Happened Tomorrow to admire and enjoy; and Dick Powell’s graceful sportiness and Linda Darnell’s new-minted loveliness are two arresting samples of what wise directing can do. But by and large the simple comic pleasures of the picture lose themselves in intricate artifice, until the last half-hour. Then, with the crowded, horse-playful racetrack scenes and with the long, romping cops-and-robbers chase which ends the picture, cinemaddicts will know for sure that this film is the work of Rene Clair, the French cinemagician whose Le Million [1931], Sous les Toits de Paris [1930] and A Nous la Liberte [1931] are among the most inspired screen comedies ever made.”

Jack Oakie and Dick Powell appear in a publicity photo from It Happened Tomorrow (1944), directed by Rene Clair.

Despite the complimentary but reserved response of the American press, It Happened Tomorrow was a major critical success in France where this excerpt of the review by Carlo Rim in Le Courrier de Paris was typical of the glowing praise it received: “It Happened Tomorrow can shake hands with his [Clair’s] best French films…This time, Rene Clair wasn’t satisfied with directing a fairytale vaudeville, with applying his rigorous aesthetics of the watchmaker-poet to this or that farce-pretext. Instead, he bravely attacked a subject that Voltaire or Chamisso would have liked, a subject that could equally well have served as a theme for some somber film with philosophical pretensions….Never before has Rene Clair’s precise and winged talent been exercised with such mastery. In a balletic rhythm, all the gears mesh perfectly, everything becomes ordered, everything works out with a clarity and an apparent simplicity…A little wine from home that doesn’t lose anything in travel.”

Linda Darnell and Dick Powell star in It Happened Tomorrow (1944) which returns to the fantasy realm of earlier Rene Clair films like I Married a Witch and The Ghost Goes West.

It Happened Tomorrow was restored by UCLA Film and Television Archive and premiered on Turner Classic Movies in 2009. Kino Lorber released the film on DVD but it has since gone out of print. You can still find DVD copies of it for sale but it seems quite likely It Happened Tomorrow will eventually be remastered on Blu-Ray by some enterprising distributor like Arrow Films or The Criterion Collection. 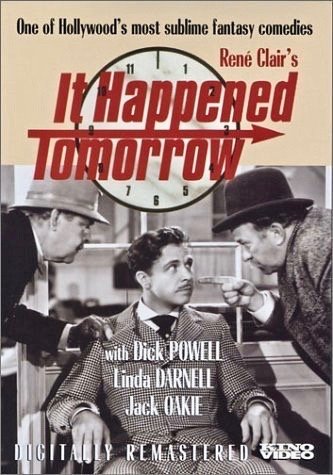 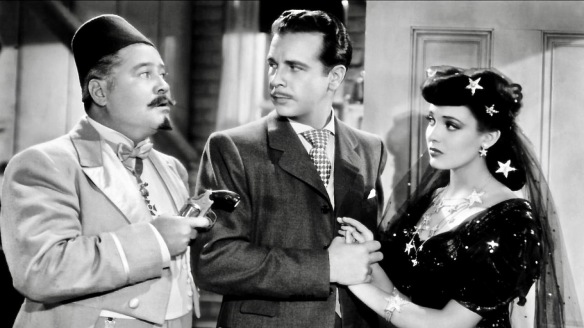 (From left to right) Jack Oakie, Dick Powell and Linda Darnell star in the fantasy/comedy, It Happened Tomorrow (1944).