This one sentence synopsis should sound familiar. A group of travelers are stranded during a severe storm at a creepy mansion where the hosts are the most unsettling part of the experience. It’s an audience-pleasing premise has served countless mystery thrillers and horror-comedies from James Whale’s The Old Dark House (1932) to The Rocky Horror Picture Show (1975) to Stuart Gordon’s Dolls (1987). But The Unnaturals (1969), directed by Antonio Margheriti, is one of the few dark and stormy night movies that stands out from the pack by virtue of its genre resistant narrative which begins as a decadent character study, slowly morphs into a supernatural thriller and signs off as an apocalyptic morality tale.

[Spoilers alert] First, let’s introduce our main players who are first seen cavorting at a posh London casino in the 1920s. Archibald Barrett (Giuliano Raffaelli) is a wealthy and corrupt real estate mogul who has made his fortune swindling people out of their property and inheritance. Ben Taylor (Joachim Fuchsberger), his lawyer, has been his accomplice in the deceptions and has destroyed his once-respectable reputation in the process.

Ben’s wife Vivian (Marianne Koch of A Fistful of Dollars fame) has had to take second place to her husband’s career ambitions for so long that their marriage has become a loveless charade. She now seeks the sexual and romantic intimacy Ben can’t provide with Elizabeth (Helga Anders), Archibald’s current mistress. Alfred Sinclair (Claudio Camaso), the business administrator for the real estate tycoon, is also infatuated with Elizabeth and their secret trysts have been noted by Vivian.

An atmospheric scene from the offbeat supernatural thriller, The Unnaturals (1969).

This jaded group of faux aristocrats depart the casino and head off into a stormy night en route to a vacation retreat in Brighton. After taking a detour on a back road, their car becomes stuck in the mud and the group is forced to seek refuge at a nearby estate. They are welcomed into a gloomy mansion by Uriat (Luciano Pigozzi) and his mother (Marianne Leibl), the proprietors of a former hunting lodge which has been closed for ten years. The place has taken on the look of a neglected taxidermy museum with its numerous stuffed animals and dusty antiques.

Marianne Leibl plays a mysterious medium at an isolated hunting lodge in The Unnaturals (1969), directed by Antonio Margheriti.

While Archibald’s chauffer ventures out into the night for assistance with the car (he is never seen again), the visitors learn that their hosts already know who they are without introductions and knew they would arrive that evening. That is because Uriat’s mother is a medium and before the night is through, each traveler, their backstory and secrets will be revealed. And each one will be guilty of treachery and possibly murder.

An Italian-West Germany production, The Unnaturals (released in Italy as Contronatura and in Germany as Schreie in der Nacht) is a rarely seen and undervalued effort from Antonio Margheriti (sometimes credited as Anthony M. Dawson), one of the leading directors of genre films during Italy’s peak cinema years in the sixties and early seventies.

Margheriti is probably best known for his gothic black and white horror masterpiece Castle of Blood (1965, Italian title: Danza Macabra) starring Barbara Steele, which he later remade in color as Web of the Spider in 1971 with Anthony Franciosa, Michele Mercier and Klaus Kinski. Margheriti was also one of the first Italian directors to venture into the sci-fi genre with 1960’s Assignment: Outer Space and later efforts like The Wild, Wild Planet (1966) and Snow Devils (1967). He even made some memorable spaghetti westerns like Vengeance (1968), And God Said to Cain (1970) and the oddball Hong Kong/Italian hybrid, The Stranger and the Gunfighter (1974, aka Blood Money) starring Lee Van Cleef and Lieh Lo. 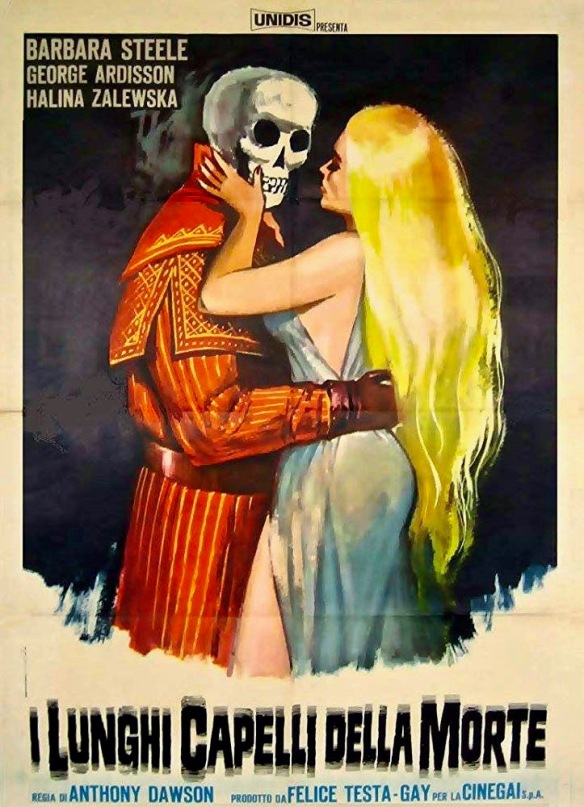 Horror film aficionados, however, hold Margheriti in held regard for the highly atmospheric gothic horror films he directed in the early sixties along with Castle of Blood – Horror Castle aka The Virgin of Nuremberg (1963) and The Long Hair of Death (1965). In some ways, The Unnaturals seems like a throwback to these earlier efforts and stands out as one of Margheriti’s better films from his later career. It also appears to have been influenced by the flashback character reveals of the Amicus horror anthology Dr. Terror’s House of Horrors (1965) and the dark intrigues of Edgar Wallace krimis like The Fellowship of the Frog aka Der Frosch mit der Maske (1959) and The Monster of London City aka Das Ungeheuer von London-City (1964), which explains the presence of German actors Joachim Fuchsberger and Marianne Koch (Their participation was also key in attracting German filmgoers to the movie).

Antonio Margheriti has directed some of Italy’s most famous genre films like Castle of Blood (1964) and the spaghetti western Vengeance (1968).

In an interview with Peter Blumenstock for Video Watchdog in 1994 Margheriti revealed that the shooting title for The Unnaturals was Trance and that he also wrote the screenplay. “It’s a very weird, strange film, but I like it very much,” he confessed. “The whole film was shot at Carlo Ponti’s studio between Pisa and Livorno, far from Rome. He gave me the key and said “Go and shoot whatever you want.” There, I found a soundstage which was full of old decors. That’s why the film looks so weird, because we used pieces from the leftover sets of countless other films, from costume dramas to Westerns. The art director was very young and interested in trying new and unusual things, so we used more or less everything we could find to create a really weird, subtle avant garde mixture.”

Marianne Koch plays one of several travelers who are stranded during a rainstorm at a gloomy mansion in The Unnaturals (1969).

Most of The Unnaturals is tightly paced, has an evocative music score by Carlo Savina (Love & Anarchy, Lisa and the Devil) and is beautifully photographed by Margheriti’s frequent cameraman Riccardo Pallottini, who largely avoids using the zoom lens which was reaching saturation overkill in other Italian films of that era. There are a few regrettable missteps such as a sequence which cross cuts between a fox hunt and a sensual lesbian encounter between Margaret and Vivien which manages to interrupt and distract from any erotic tension between the two women but also kills the action flow of the hunting scenes. The climatic tidal wave which crashs into the lodge and engulfs the guilty quintet (Uriat and his mother are unharmed observers) remains a low-budget effect with miniature sets yet The Unnaturals emerges as a satisfying morality tale in which the wicked get their just desserts. Their fate had been sealed by the medium during the séance: “An invincible monster will devour you all. That monster is your conscience.”

Joachim Fuchsberger and Marianne Koch play a married couple whose secrets will soon be exposed in The Unnaturals (1969).

Among the cast of The Unnaturals, Joachim Fuchsberger stands out in a change of pace role that is in marked contrast to the heroic, unflappable police inspectors and detectives he played in countless Edgar Wallace thrillers like The Face of the Frog (1959, aka Der Frosch mit der Maske). He actually manages to make his amoral lawyer almost sympathetic by demonstrating a sense of guilt, regret and desire to break away from his employer while never managing to change his ways. As Ben’s love starved wife, Marianne Koch also evokes some pity even if she comes across like a brooding vampire. 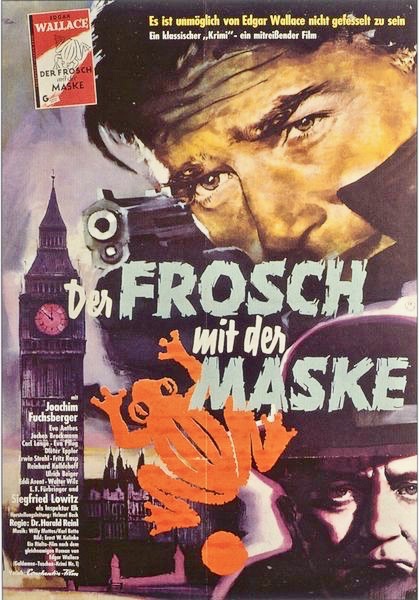 The most villainous role belongs to Giuliano Raffaelli as the lying/cheating/homicidal scumbag Archibald who destroys everyone in his path and spouts declarations like “All games fascinate me. Isn’t life a game too? Fate deals the cards and one doesn’t know the outcome.” Raffaelli didn’t make many movies and was rarely more than just a supporting character but he is enjoyably loathsome in a major part.

Helga Anders plays the alluring and deceptive Elisabeth in The Unnaturals (1969).

The role of Elizabeth, played by the voluptuous and enticing Austrian actress Helga Anders (Roger Fritz’s The Brutes, 1970), figured prominently in the promotional materials for certain territories even though her character was more decorative than substantial. Some posters and lobbycards even make The Unnaturals look like some softcore exploitation film when the reality is something less explicit and a lot more stylish in execution.

As Elizabeth’s lover Alfred, Claudio Camaso, brother of acclaimed actor Gian Maria Volonte, is barely developed as a character and is easily overshadowed by the other players. He would make a much stronger impression a few years later as one of the many murder suspects in Mario Bava’s A Bay of Blood (1971).

The real surprise in The Unnaturals is Luciano Pigozzi, the prolific Italian character actor (more than 100 film credits) who has a much larger role here than in most of his genre outings which tended to be horror (Werewolf in a Girls’ Dormitory), giallo (Blood and Black Lace) or action adventure films (Spy in Your Eye). Pigozzi dominates the second part of The Unnaturals and proves himself to be the film’s true hero – the judge, jury and executioner of those who wronged him and his mother ten years earlier. It’s a plum role and he is subtly menacing as Urial. 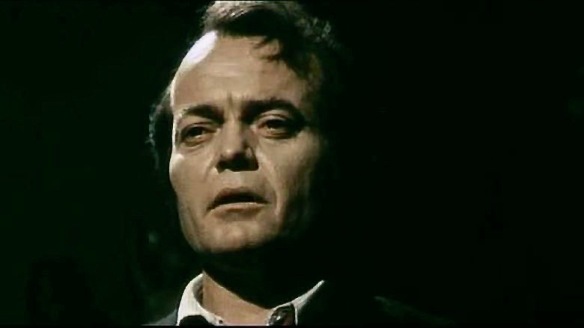 Italian character actor Luciano Pigozzi has a key role in the mysterious events of The Unnaturals (1969), directed by Antonio Margheriti.

Margheriti would later state in the aforementioned Video Watchdog interview that Pigozzi “went almost crazy during that film, because I had shot scenes lasting 10-15 minutes in one take, with 32 or 33 positions, so he had to remember a lot of dialogue and hit his marks. The poor guy mastered it quite well.” 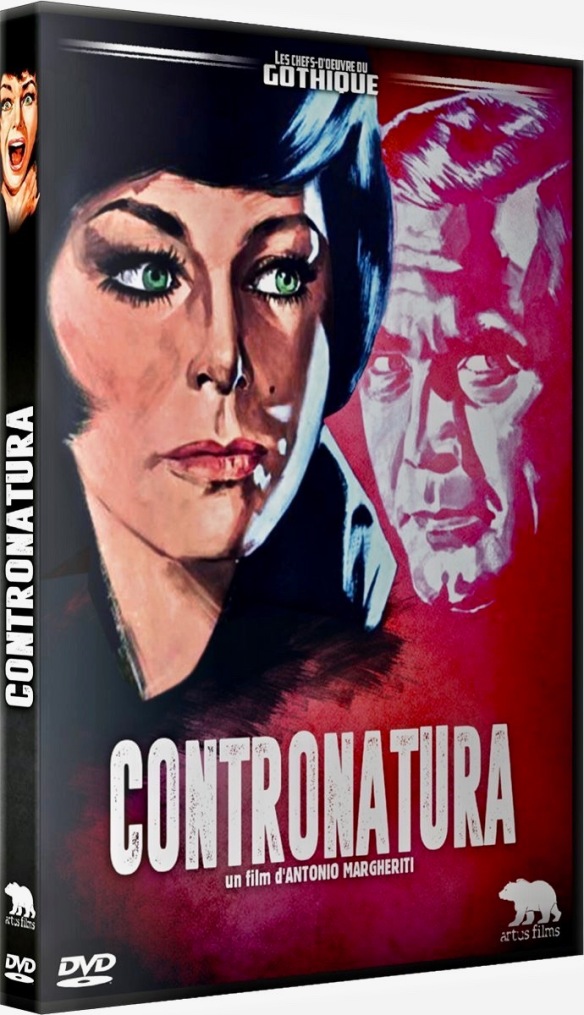 The Unnaturals is not currently available on any format in the U.S. If you have an all region DVD player you might be able to find a French or Germany DVD of it but it would probably not offer English subtitles as an option. Perhaps Arrow Films or some other Blu-Ray distributor that is fond of Italian genre films might consider The Unnaturals for a future restoration project. Margheriti fans would certainly welcome such an endeavor.

A group seance reveals long hidden secrets amid a group of decadent aristocrats in The Unnaturals (1969).