By the 1950s, the popularity of the Western genre was in decline and Hollywood studios tried to revitalize the once box office proof formula by trying everything from Technicolor and Cinemascope visual enhancements to hybrid novelties such as 1954’s Red Garters (a musical with stylized sets) and 1959’s Curse of the Undead (featuring a vampire gunslinger) to topical approaches that reflected a growing interest in psychology such as The Furies [1950] and High Noon [1952]. Into the latter category falls The Halliday Brand [1957], one of the more intense but least well known of the adult Westerns being produced in that era.

In the foreground from left to right are Joseph Cotten, Betsy Blair and Ward Bond in The Halliday Brand (1957), a western directed by Joseph H. Lewis (Gun Crazy).

A low-budget effort produced by Collier Young (Private Hell 36, 1954) and directed by B-movie maverick Joseph H. Lewis (Terror in a Texas Town, 1958), the film, according to film scholar Francis M. Nevins (author of Joseph H. Lewis), deconstructs the “family empire” concepts that became popular in TV series such as Bonanza and reshapes them “into something closer to the Greek myths about the fall of the house of Atreus.”

Martha (Betsy Blair) grieves for her half breed lover (Christopher Dark), a victim of lynch mob justice, in The Halliday Brand (1957).

Told in flashback from the deathbed of Big Dan (Ward Bond), the local sheriff and tyrannical patriarch of the Halliday family, the film relates the internal conflicts which have torn the family apart and divided the two brothers, Daniel (Joseph Cotten) and Clay (Bill Williams). Daniel rejects his father’s racist attitudes and ruthless sense of justice by giving up his inheritance. He strikes out on his own after Jivaro (Christopher Dark), a half breed who loves his sister, Martha (Betsy Blair), is falsely accused of cattle rustling and murder by Big Dan and killed by a lynch mob. Months later, Daniel is enticed back to the Halliday ranch when he learns his father has consented to the marriage of Clay and Aleta (Viveca Lindfors), Jivaro’s sister, but it proves to be only a ploy by Big Dan to confront and arrest his rebellious son for past violations of the law.

The tense, volatile relationship between Big Dan and Daniel has obvious Oedipal overtones and becomes progressively darker as the father-son bond is completely severed by hatred and irreconcilable differences. The grim trajectory of the narrative and its emphasis on character over action often makes The Halliday Brand seem closer in tone and style to a film noir than a Western. Certainly it is no conventional oater and some may find the movie overly arty and pretentious due to the self-conscious acting styles and claustrophobic staging which resembles a theater play and not a movie. 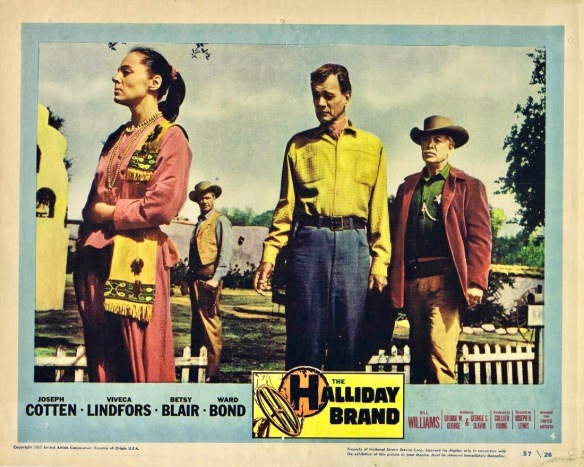 The cast of The Halliday Brand was initially announced in an article in The Hollywood Reporter in March 1956 and included Ida Lupino, Howard Duff, Charles Bickford and “either Rita Moreno or Debra Paget.” The article also mentioned Robert Stevenson as a possible director. None of those people ended up being involved in the production but the mention of Ida Lupino may have been due to the fact that Halliday producer Collier Young was married to her from 1948-1951 and continued to work with her and her next husband, actor Howard Duff, throughout the fifties.

Made in the wake of the House Un-American Activities Committee investigations of communist infiltrators in Hollywood, The Halliday Brand was especially significant for Lewis’s decision to cast Betsy Blair in a key role. Blair had previously been blacklisted by the film industry as a leftist sympathizer even though she had never been given a trial to prove her innocence. Lewis also cast Ward Bond as the self-righteous Halliday patriarch, a role, which matched Bond’s off-screen reputation as one of Hollywood’s most outspoken conservative reactionaries. According to Blair in her autobiography, The Memory of All That, the actress was told by Lewis that Bond “was the reason I must be in the film. Lew said if I appeared in a movie with Ward Bond, the studios would assume that I’d been officially removed from the blacklist. And the wonderful roles would follow.”

When Blair went to meet Bond on the set during the first day of shooting, she anticipated a negative reaction but related in her memoir, “He confounded me and my expectations….he was already ensconced in one of the reclining barbershop chairs in front of the long row of mirrors. The assistant made the introductions. Did he just look up and nod? No, he straightened his chair, stood up, shook my hand properly, and welcomed me aboard. I was playing his daughter in the film, and he gave me a fatherly smile. And that was it. He was unfailingly polite, on time, ready to run through scenes if any of us wanted to, always knew his lines. There was no cause for complaint. I had to remind myself that I hated what he believed. I couldn’t hate him as a fellow actor.” 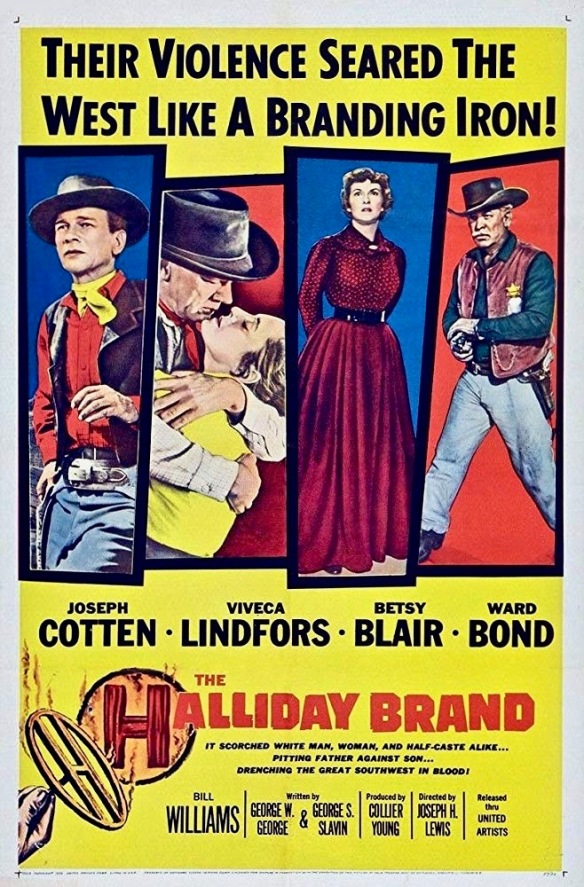 Unfortunately, The Halliday Brand did not lead to more lucrative acting offers from Hollywood for Blair so, following a divorce from her husband (singer/dancer Gene Kelly), she relocated to Europe where she appeared in several critically acclaimed and offbeat features including Michelangelo Antonioni’s Il Grido [1957], Basil Dearden’s All Night Long [1962], Mauro Bolognini’s Senilita [1962] and Claude Berri’s Marry Me! Marry Me! [1969]. She got remarried in 1963 to director Karel Reisz and moved to London where she lived for the next thirty-nine years.

When The Halliday Brand opened in theatres in the U.S., it fared no better than most B-movies of that era. It had a brief theatrical run and then vanished. Its reputation is considerably better today now that Joseph H. Lewis’s career as a director has been reassessed and championed by such high profile cinema buffs as Martin Scorsese. Phil Hardy, editor of The Encyclopedia of Western Movies, states that The Halliday Brand “is undoubtedly the most powerful of Lewis’ Westerns in the fifties.” Lewis, of course, is also the gifted auteur who gave us such unforgettable film noir gems as Gun Crazy [1950] and The Big Combo [1955].

One of the more succinct reappraisals of The Halliday Brand is this review excerpt by Paul Taylor from the TimeOut Film Guide: “If ever a movie justified the once-modish tag of ‘psychological Western,’ it’s this one. Lewis’ film has been unforgivably neglected, for it matches his unique visual intelligence to a remarkably explicit critique of patriarchal law…The psychological – and political – resonances are specified in the clarity of Lewis’ visual metaphors (the gun in the foreground, dead wood littering the frame), which gloriously transcend the minor irritants of miscasting and underbudgeting. Impressive.”

Joseph Cotten and Viveca Lindfors star in the 1957 western The Halliday Brand, which plays out like a Greek tragedy on the range.

The Halliday Brand is still available as a MGM Limited Edition DVD-R. The disc is a no-frills affair (no extra features) and was first released in June 2011. The film also airs occasionally on Turner Classic Movies so check their monthly programming schedule. At this time no Blu-ray edition of it is available. 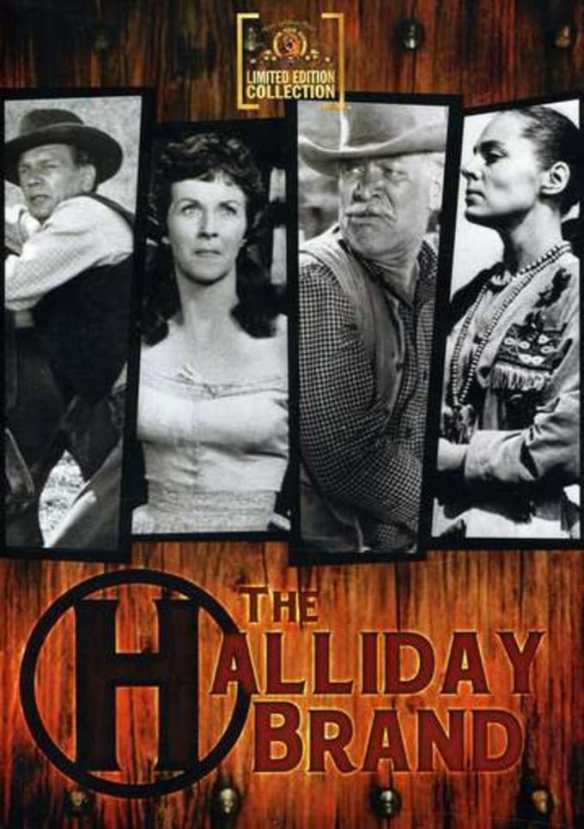 The MGM Limited Edition DVD-R of The Halliday Brand.

*This is an updated and revised version of an article that originally appeared on the Turner Classic Movies website.