In June 1973 the democratic government of Uruguay was overthrown by a military dictatorship that lasted until February 28,1985 and was responsible for the incarceration of more than 5000 people and the systematic torture and human rights abuse of prisoners. Among the prisoners were members of the left-wing guerrilla organization known as the Tupamaros (aka the National Liberation Movement), and included activist Jose Mujica, the poet and playwright Mauricio Rosencof and journalist Eleuterio Fernandez Huidobro. A Twelve-Year Night (La Noche de 12 Anos), which premiered on Netflix in late December and is currently available on the service, depicts the plight of these three men in a powerful true-life drama directed by Alvaro Brechner.

Uruguay’s official entry for Oscar consideration as the Best Foreign Language Film of 2018, A Twelve-Year Night faced some unusually stiff competition this year and was overlooked in favor of Capernaum (from Lebanon, director: Nadine Labaki), Cold War (from Poland, director: Pawel Pawlikowski), Never Look Away (from Germany, director: Florian Henckel von Donnersmarck), Roma (from Mexico, director: Alfonso Cuaron) and Shoplifters (from Japan, director: Hirokazu Koreeda). Too bad the Best Foreign Language Film category didn’t allow for eight nominees like the Best Picture category but A Twelve-Year Night still might not have been nominated because this is an often challenging and hard-to-watch movie for many viewers due to its grim subject matter and the fact that the political history of Uruguay in the 1970s is something most Americans know little about or have any interest in exploring. 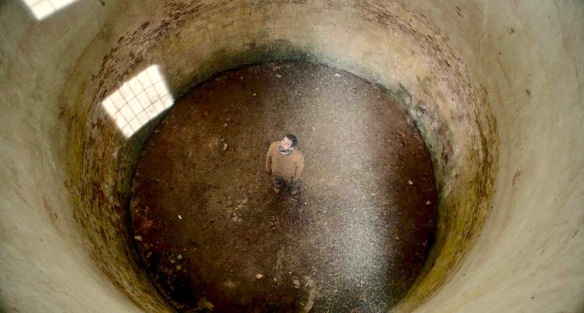 Brechner’s film has not yet been scheduled for a theatrical release in Atlanta and may never receive one. Admittedly, A Twelve-Year Night is no one’s idea of a fun night out at the movies but discerning viewers who prefer thought-provoking cinema over formulaic Hollywood fare will be rewarded with a deeply moving and ultimately transcendent tale of human survival under the most barbarous conditions.

Three men are subjected to twelve years of torture and confinement in La Noche de 12 Anos (2018, aka A Twelve-Year Night), based on real events that occurred in Uruguay in the 1970s.

The film opens with a quote from Franz Kafka’s In the Penal Colony, which sets the tone for the authoritarian nightmare that unfolds. Brechner then immerses the viewer in a disorienting, subhuman environment with a dull color palette that is dominated by grays, browns and institutional shades of green and blue. We experience the sense of time being erased and the day-to-day sensory deprivation that our three protagonists endure. Even the sound design enforces the paranoid ambiance as we hear the slamming of cell doors, the turning of keys in locks, the marching feet of soldiers, and intimidating voices in prison corridors.

In an interview with Variety reporter Emilio Mayorga, Brechner says, “…it was essential that the visuals were “dirty,” that they came from the gut. There’s no aesthetic recreation of violence. Here, it’s about depicting another kind of darkness. I wanted the camera to seem as confused as the characters. The camera is in a privileged place, but doesn’t know what’s going to happen.”

The first half of the film takes place mostly inside various prison cells over the years as Mujica (Antonio de la Torre), Rosencof (Chino Darin) and Huidobro (Alfonso Tort) are secretly shuttled around the country in blindfolds by armed soldiers from one facility to another in order to avoid detection by local residents or leftist sympathizers. The prisoners have no contact with each other. They are kept in solitary confinement, shackled in chains and stripped of all basic necessities. No toilet paper, no running water, no bed or blankets.

Chino Darin, in the role of political prisoner Mauricio Rosencof, is allowed a brief respite from wearing a hood in A Twelve-Year Night (2018).

Torture sessions occur without warning as the prisoners are prodded to provide information they don’t possess and punished by being covered with gasoline-soaked hoods with the threat of being burned alive. (The continual use of burlap hoods to keep the prisoners disoriented and unable to view their surroundings has undeniably eerie associations to Rene Magritte’s famous 1928 painting, The Lovers II.)

At the point when the treatment of Mujica, Darin and Huidobro is beginning to become unbearable, however, A Twelve-Year Night begins to provide glimpses of hope and possible salvation through subtly observed details in the prisoners’ daily routines. Indeed, the most remarkable aspect of the film is the way it demonstrates how each prisoner develops his own method of coping and surviving the mental and physical ordeals of their captivity.

Rosencof (Chino Darin) communicates with his neighboring cellmate via knocks on the wall in A Twelve-Year Night (2018).

Huidobro, for example, discovers a way to communicate with Darin through his cell wall when guards are out of earshot. He creates a code equating the number of knocks on a wall with the letters of the alphabet. It might result in bloody knuckles but it proves to be an effective means of sharing information.

Uruguay poet and playwright Mauricio Rosencof (Chino Darin) shared the true story of his imprisonment in his memoirs, which inspired the film, A Twelve-Year Night (2018)

Darin’s talent as a poet and writer comes in handy when he overhears a guard complaining to another about his problems with women. After offering to help the guard fashion a romantic letter to his love interest, he slowly wins his jailer’s trust and eventually ends up helping the prison sergeant woo a potential fiancée through penning seductive missives a la Cyrano de Bergerac.

Jose Mujica (Antonio de la Torre) is reunited with his mother at the moving conclusion of A Twelve-Year Night (2018), based on real events in Uruguay in the 1970s.

To counterbalance the oppressive bleakness of the film’s first half, director Brechner begins to integrate brief flashbacks into the narrative to show how the three prisoners ended up being incarcerated. Escapist fantasies and memories of the prisoners’ past lives and families are also served up in fleeting glimpses. 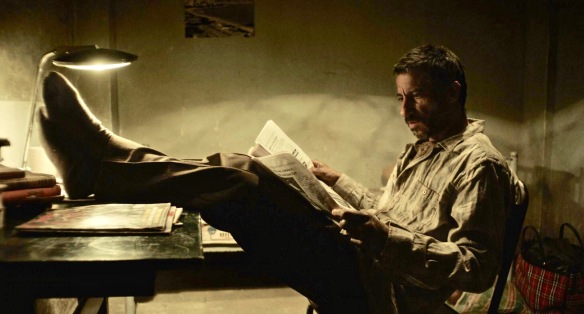 Eleuterio Fernandez Huidobro (Alfonso Tort) is briefly allowed to read newspapers and listen to the radio in his prison cell in A Twelve-Year Night (2018).

A major turning point in A Twelve-Year Night occurs when the prisoners are suddenly provided with desks, typewriters, transistor radios, newspapers, fresh bread, toilet paper and other amenities. The improved living conditions for Mujica, Rosencof and Huidobro turns out to be a ploy to convince the International Red Cross investigators that the prisoners are being treated in a humane manner. But change is in the wind and the final half hour of the film is a moving depiction of justice finally being served. 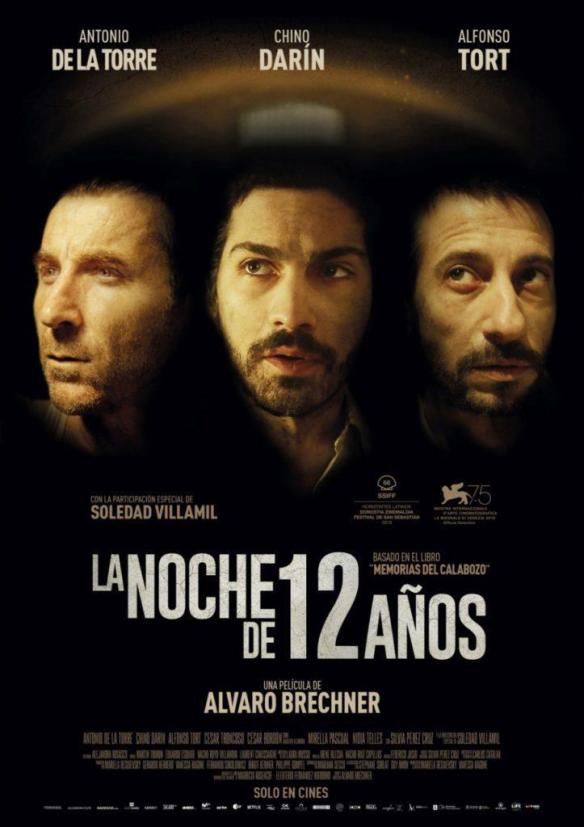 A Twelve-Year Night marks the third feature film for Uruguay-born writer/director Alvaro Brechner and his most overtly political effort; the first two films – Bad Day to Go Fishing (2009) and Mr. Kaplan (2014) – were social comedy-dramas. The three principal actors are outstanding and Antonio de la Torre is a dead ringer for the real Jose Mujica in his younger days. Chino Darin, who plays Rosencof, was recently seen in the Spanish true-life crime drama El Angel (2018) and Alfonso Tort, in the role of Huidobro, makes a particularly strong impression with his eloquently expressive eyes and face.

Eleuterio Fernandez Huidobro (Alfonso Tort) achieves a small victory regarding his use of a toilet in a pivotal moment in A Twelve-Year Night (2018).

My only criticism of the film is the use of the Paul Simon song, The Sounds of Silence (performed by Silvia Perez Cruz), which is used during a sequence toward the end when the three prisoners finally meet face to face in a prison courtyard. The music video-like montage that follows actually blunts the poignancy of the reunion and feels like emotional overkill but the real life ending of A Twelve-Year Night is better than any happy-ever-after conclusion Hollywood could concoct. 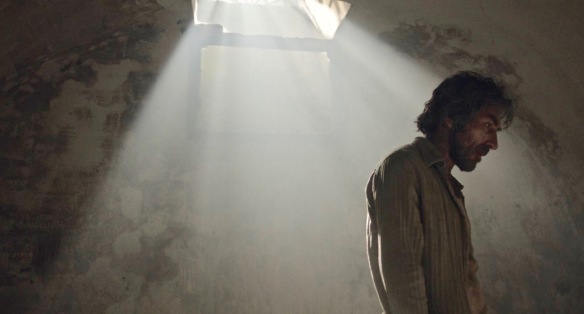 Uruguay guerrilla leader Jose Mujica (Antonio de la Torre) develops his own method of surviving under years of torture and abuse in A Twelve-Year Night (2018).

All three prisoners ended up as elected officials in the Uruguay government. Mauricio Rosencof became the Director of Culture in Montevideo. Eleuterio Fernandez Huidobro became the Minister of Defense until his death in 2016. And most remarkable of all, Jose Mujica, at age 75, became the President of Uruguay in 2010. He retired at the end of his term in 2015 and lives quietly with his wife on a flower farm outside Montevideo.

The former President of Uruguay Jose Mujica retired in 2015 and is one of the main characters in a film based on his imprisonment in the 1970s – A Twelve-Year Night (2018).

If A Twelve-Year Night piques your interest in other films about the military dictatorship in Uruguay in the 1970s, you should definitely check out Costa-Gavras’s State of Siege (1972) starring Yves Montand as an official for the U.S. Agency for International Development. His character was based on the 1970 real-life kidnapping and execution by Tupamaros guerrillas of Daniel Anthony Mitrione, an American working for the Office of Public Safety.