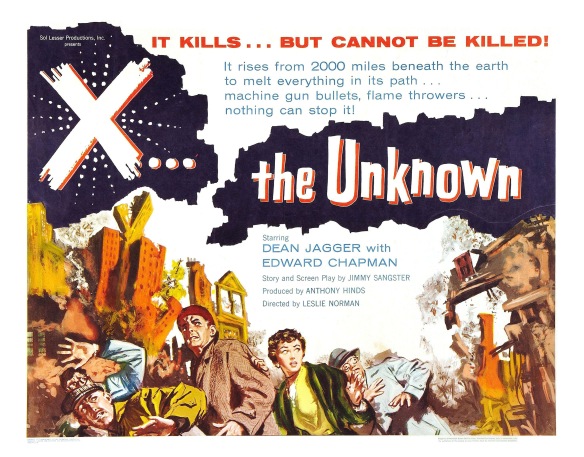 In many ways a precursor to The Blob (1958) and Caltiki, the Immortal Monster (1959), X the Unknown (1956) is a much more thought-provoking and serious attempt to demonstrate the consequences of science run amok than your standard monster-on-the-rampage chiller. The film, directed by Leslie Norman, was actually inspired by the success of The Quatermass Xperiment (1955, aka The Creeping Unknown), which was released the previous year and was a huge box office hit for Hammer Studios.

SYNOPSIS: During an army training maneuver on the Scottish moors, a fissure in the earth releases something from the depths below which results in the death of one soldier and severely burns another while registering high readings on a Geiger counter. Dr. Adam Royston (Dean Jagger), an American scientist whose field of study is atomic energy, is called in to investigate. What he discovers is a large mass of primordial ooze that feeds on radioactivity and is growing larger and larger from its nightly raids on the surrounding countryside. Royston, in his attempts to stop and contain this deadly creature, finds himself caught up in a bureaucratic power struggle between John Eliott (Edward Chapman), the head of an atomic research center, and Mac McGill (Leo McKern), a representative from the United Kingdom Atomic Energy Commission. When the creature begins to grow larger in size and threaten more lives in its absorption of energy, Royston with assistance from the army, attempts to destabilize and destroy it in one last desperate ploy, which may or may not work.

Hammer executive Tony Hinds entrusted fledgling writer Jimmy Sangster with the screenplay for X the Unknown – it was his first feature script – and the result was another hit for Hammer, despite the fact that it earned an ‘X Certificate,’ restricting it to adult audiences. This was due to some of the more disturbing and explicit special effects, especially in the scene where a hospital intern, interrupted during foreplay, is devoured by the creature, reducing his face and hands to bubbling flesh, then bone. According to the AFI (American Film Institute) entry on the film, “the effect was achieved by placing heating elements into a wax replica of the actor’s face.”

The Quatermass Xperiment, which had also been slapped with an ‘X Certificate,’ had featured similar scenes as well but the controversy only helped boost the box office receipts of both movies when they were distributed in the U.S., Japan, and Europe.

According to some sources, Joseph Walton, a pseudonym for blacklisted director Joseph Losey, was initially hired to helm X the Unknown but left the production after a week due to illness. Losey, of course, would go on to cover similar thematic ground in his 1963 psychological sci-fi drama, These Are the Damned (aka The Damned).

As a replacement for Losey, Leslie Norman (Dunkirk, 1958) proved to be an exacting craftsman but was highly unpopular with the cast and crew. Len Harris, one of the film’s camera operators later said, “He [Norman] was one of the few people that wasn’t liked at Hammer, and you’ll notice that, despite the film’s quality, he never did another for us. He was a good technical director, but he couldn’t direct people very well. Dean Jagger simply wouldn’t be directed by him! Leslie was always complaining and could be very harsh. He didn’t think much of the film, either…..The thing we disliked the most was his using abusive language through a loud hailer for all to hear. That simply wasn’t done at Hammer!” (Source: Hammer Films: An Exhaustive Biography by Tom Johnson & Deborah Del Vecchio).

Dean Jagger (center) surveys the crack in the earth where an energy-eating blob emerged in X The Unknown (1956).

To give you some idea of Norman’s alienating behavior, consider this anecdote from supporting actor Michael Ripper: “When I introduced myself to Leslie Norman, he told me that he would have hired Victor Maddern in my role if he had been casting the film!”

Some of the exterior shots of the moors and the surrounding countryside in X the Unknown were filmed in Buckinghamshire in South East England. The striking black and white cinematography of Gerald Gibbs (Station Six-Sahara, 1962) perfectly conveys the paranoid, fearful mood of the film through the desolate moors and the often sterile interior settings, which are further enhanced by James Bernard’s ominous score and the disturbing sound effects. 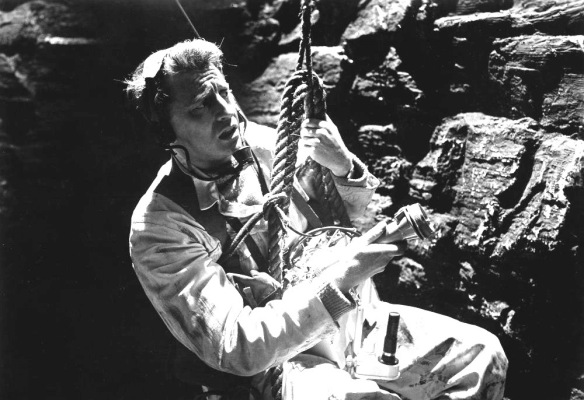 The decision to explore a fissure in the earth turns out to be a bad idea in X The Unknown (1956) from Hammer Film Studios.

Some of X the Unknown‘s most effective scenes are shot from the creature’s point-of-view such as one where it stalks a terrified little boy in the woods and the suspenseful climax where it advances toward a chapel full of villagers. The film also provides a lively supporting role for Anthony Newley, who was married to Joan Collins at the time, and on the rise as a young actor in the British film industry.

Primordial ooze on the rampage in X The Unknown (1956).

According to film reviewer Derek Winnert, X the Unknown had been intended as a sequel to The Quatermass Xperiment but Nigel Kneale, creator of the Quatermass series, objected to screenwriter Sangster using his characters so Jagger’s Dr. Adam Royston became a substitute for Professor Bernard Quatermass (played by Brian Donlevy in the first two Quatermass films).

The U.S. release poster for the British sci-fi classic, The Quatermass Xperiment (1955).

Copyright records for X the Unknown state a running time of 86 minutes but the U.S. release version was closer to 79 minutes in length. Other running times of 91 minutes and 81 minutes have been reported but until actual proof is offered on any of these varying lengths, the 79 minute version appears to be the official uncut edition.

Reviews for X the Unknown were much more positive than most sci-fi genre efforts screened by mainstream movie critics, who usually dismissed them as junk. In England, Films and Filming called it “A welcomed change from interplanetary yarns,” The Daily Telegraph proclaimed it “good, grisly fun,” and The Kinematograph Weekly pegged it as “gripping science fiction.” 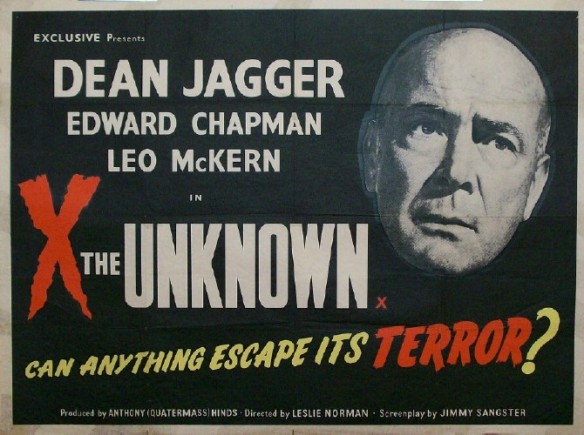 It was also well received in the U.S., where it was distributed by Warner Bros. after an earlier deal with RKO never materialized. Variety noted that it was “a highly imaginative and fanciful meller….There’s little letup in the action, and suspense angles are kept constantly to the forefront.” A more contemporary review of X the Unknown in the TimeOut Film Guide by David Pirie places the film in a proper context: “1956 – the year of the Suez crisis, a sharp increase in the crime rate, and uneasy preparation for WWIII – spawned a series of gloomy thrillers (both in Britain and in America) in which the weight of the military is mobilised against various alien organisms from the bowels of the earth or outer space…in a lot of ways it [X the Unknown] communicates the atmosphere of Britain in the late ’50s more effectively than the most earnest social document.”

A hospital intern meets a grisly death from X The Unknown (1956), directed by Leslie Norman.

Hammer Studios would go on to release other well-regarded sci-fi efforts such as Enemy from Space (1957, aka Quatermass 2) and These Are the Damned but their bread and butter were horror films which dominated their production schedule for the next two decades such as their Frankenstein, Dracula and Mummy franchises.

As for Leslie Norman, he would go on to direct episodes of the cult TV series, The Avengers, and dabble in the sci-fi genre one more time with The Lost Continent (1968), a deliriously entertaining fantasy adventure in a which a ship is blown off course in a storm and ends up stranded on an island populated by giant crustaceans and descendants of Spanish conquistadors!

X the Unknown is sorely in need of an upgrade since its last appearance on DVD in 2004 on a double feature with Four Sided Triangle. It was released by Anchor Bay as part of their Hammer Collection franchise. Perhaps Arrow Video will consider releasing the sci-fi favorite on Blu-Ray.

Dr. Adam Royston (Dean Jagger, right) shares his theory about a radioactive blob with a colleague in X The Unknown (1956).

*This is a revised and updated version of an article that was first published on the Turner Classic Movies website.