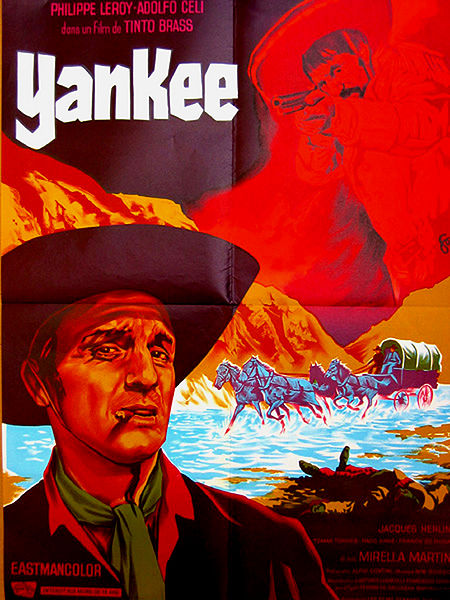 If U.S. moviegoers are familiar with the name Tinto Brass at all, it is probably due to the infamous 1979 epic Caligula which featured world renowned actors (Peter O’Toole, Helen Mirren, John Gielgud, Malcolm McDowell, etc.) and hardcore sex scenes (which were later added by producer/Penthouse tycoon Bob Guccione against the wishes of Brass who disowned the film). Brass had already established himself as a master of art house erotica/perversity with 1976’s Salon Kitty about a brothel in WWII Berlin where the prostitutes were undercover spies. But after Caligula, Brass seemed much happier directing more modestly budgeted, softcore adaptations of literary works like The Key (1983, based on the novel by Jun’ichiro Tanizaki) and Paprika (1991, inspired by the novel Fanny Hill), which showcased his increasing obsession with shapely female bottoms.

In retrospect, his early career is a contemplation of the paths not taken: documentary (Ca ira, il fiume della rivolta aka Thermidor, 1964), avant-garde cinema (L’urlo aka The Howl, 1970) and eccentric genre offerings such as Col cuore in gola aka Deadly Sweet, 1967). Of the latter, Yankee (1966), the only spaghetti western ever directed by Brass, is definitely worth a look. 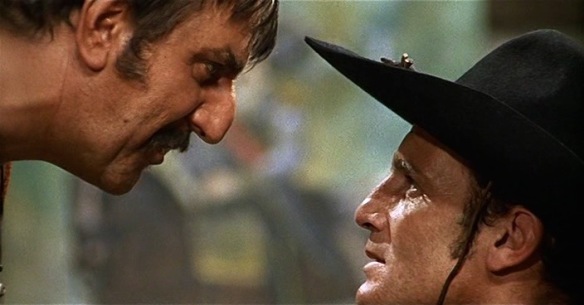 Synopsis: An American drifter known only as Yankee rides into a town in New Mexico that is under the control of the power mad Grand Cougar and his sadistic henchmen. Yankee’s initial attempts to form a partnership with the Grand Cougar over the heist of a U.S. gold shipment end in a power play that forces Yankee to go into hiding. A cat and mouse game ensues until a violent showdown by the river in which most of the major players lie dead. 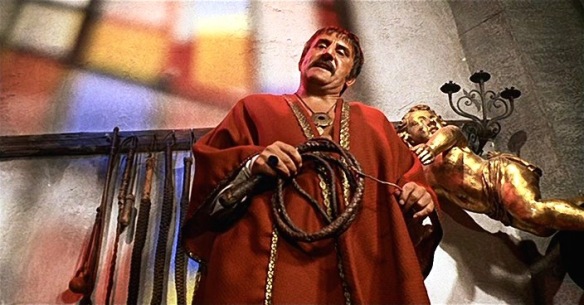 Despite a by-the-numbers storyline and exaggerated Western stereotypes influenced by Sergio Leone’s A Fistful of Dollars, Yankee stands apart from other B-movie imitations in the genre due to Brass’s directorial ingenuity. For one thing, the film is consistently arresting on a visual level (disorienting camera angles, extreme close-ups, theatrical lighting schemes, jump cuts), thanks to cinematographer Alfio Contini, who shot Michelangelo Antonioni’s Zabriskie Point (1970) and Liliana Cavani’s The Night Porter (1974), to name just a few. Even when the pacing occasionally flags, Brass’s attention to the odd detail – a happy-go-lucky, whistling theme song in direct contrast to the grisly happenings – keeps you off balance. 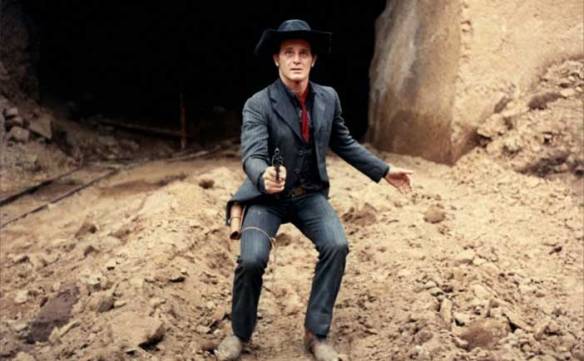 The protagonist is undeniably an inscrutable figure whose motivations are never clear like Clint Eastwood’s “Man with No Name” prototype but the similarities end there. Yankee dresses like a dandy (his oversized cowboy hat is borderline absurd) and behaves more like a professional card shark who is trying to psyche-out his opponents. 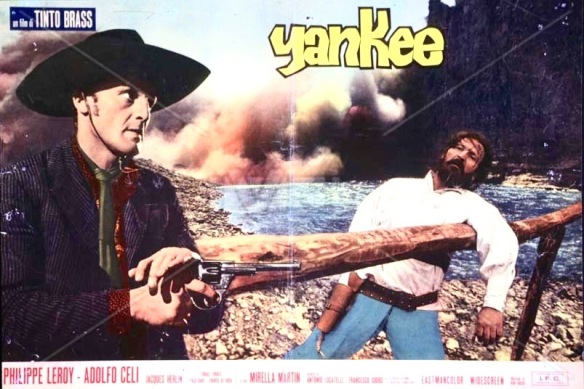 This marked a rare foray into spaghetti Westerns for French actor Philippe Leroy but he brings a deceptively light but steely quality to his character that contrasts sharply with his vainglorious nemesis, the Grand Cougar (played by Adolfo Celi, James Bond’s evil rival in Thunderball ). Although he is lean, wiry and athletic like Jean-Paul Belmondo, Leroy lacks the latter’s effortless charisma but then again, he is playing someone who is a cipher and, in the end, may be nothing more than a cunning opportunist. 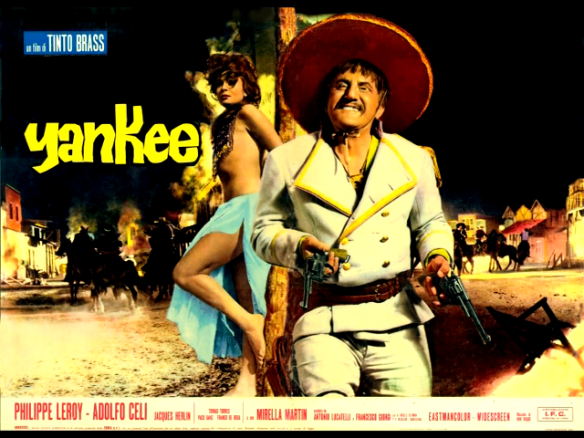 Adolfo Celi, on the other hand, steals the film handily in the role of the wicked Grand Cougar whose behavior is always erratic and unpredictable. He’s also pretty handy with a whip and during one temper tantrum (after Yankee has defaced his favorite self-portrait), he yells, “I want to make myself one hundred portraits with the shreds of your skin.” Yes, when he’s bad, he’s very, very bad….and highly entertaining, especially when he’s railing against his own cretinous gang of sociopaths. 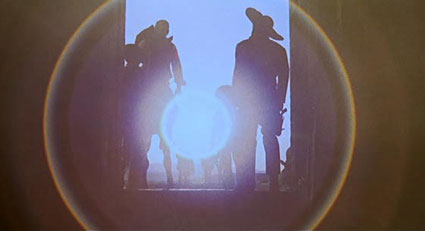 One of them is Filosofo (Jacques Herlin), whose more appropriate name should be Nihilisto since he operates in a complete moral vacuum. He appears to be at his happiest when killing defenseless villagers and, in one scene, he tortures a scorpion by placing him a ring of fire, a grotesque image that predates a similar opening sequence in Sam Peckinpah’s The Wild Bunch. 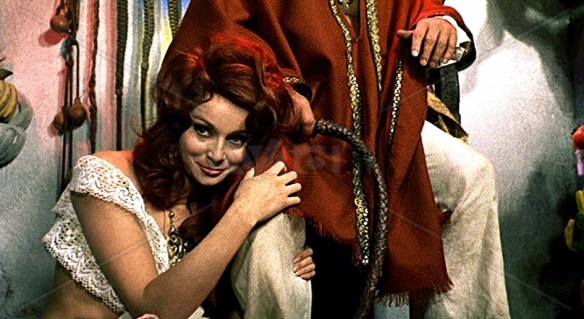 Mirella Martin as Rosita in Yankee (1966)

The only major female role in Yankee is a thankless one and that honor goes to Mirella Martin as Rosita, the Grand Cougar’s mistress/whore. She does get some choice lines such as “The smell of roasted meat turns me on” (uttered at a decadent banquet where Yankee, stripped and bound upside-down on an octangular wheel, is the evening’s entertainment). She is also later stripped naked and used as a lure by Yankee to draw the Grand Cougar and his men to a deserted outpost that becomes a shooting gallery. But the female nudity in this film is discreet and fleeting compared to Brass’s later slide into soft-and-hardcore exploitation. 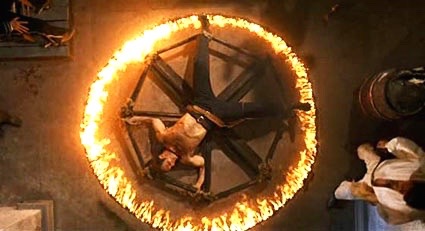 Philippe Leroy is subjected to the ring of fire in Yankee (1966), directed by Tinto Brass.

Brass is much more generous with the violence and serves up some sadistically original set pieces such as a shoot-out in a mine where Yankee kills all of his antagonists except one whom he cripples by shooting both his arms and sending him back to his boss (and certain death) with the bodies of his dead companions loaded on horses like sacks of flour. 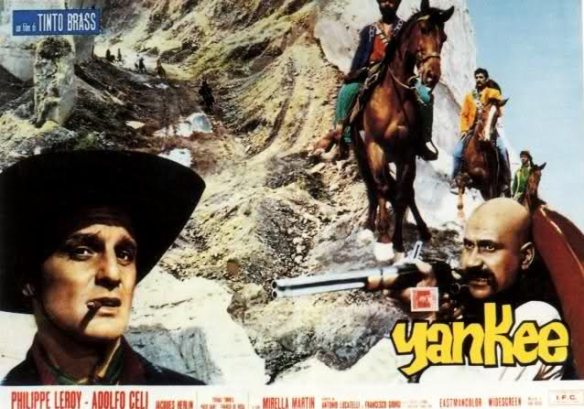 In past interviews, Brass has disowned Yankee, saying the film was taken away from him upon completion and re-edited against his wishes. It makes you wonder what his original cut looked like but the film, as it stands, is quite stylish and a small taste of what was to come in the more avant-garde experimentation of Nerosubianco aka Attraction (1969) and L’urio (The Howl, 1970). 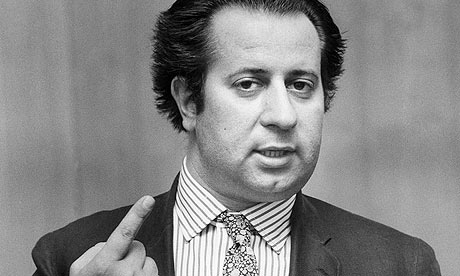 I saw Yankee in a DVD Pal edition from Germany’s Koch Media label and it is an exceptionally eye-pleasing transfer with English subtitle options. If you have an all-region DVD player, you can still find copies of it for sale on Amazon. 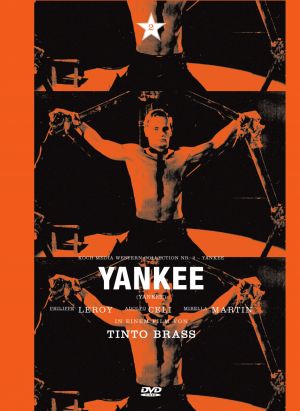 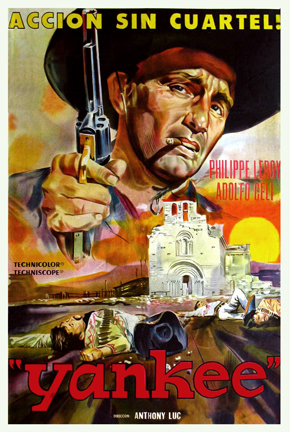