As you can see this is not the raunchy 1984 comedy, Bachelor Party starring Tom Hanks and Tawny Kitaen but the 1957 drama The Bachelor Party, adapted for the screen by Paddy Chayefsky and featuring Don Murray who had just made a big splash in his feature film debut opposite Marilyn Monroe in Bus Stop that same year. Made two years after Chayefsky’s Oscar-winning breakout hit Marty, The Bachelor Party continues the author/playwright’s preoccupation with the urban male in a drama brimming with angst, alienation and other candid observations of the human condition. A comedy it is not though there are moments of idiosyncratic humor sprinkled throughout but nothing that comes close to the scathing satire of Chayefsky’s later work such as The Hospital (1971) or Network (1976).

Synopsis: A group of bookkeepers at a New York City office attend a bachelor party for Arnold (Philip Abbott) who is more than a little apprehensive about his approaching wedding. With their co-worker Eddie (Jack Warden) organizing the festivities, the men indulge in an evening of drinking and bar-hopping before ending up at a bohemian party in Greenwich Village. As the evening drags on and the alcohol flows, the men begin to reveal their own anxieties about their lives, careers and relationships turning their celebration into a dark night of soul-searching. Charlie (Don Murray), a newlywed, already feels trapped in his marriage, compounded by the fact that his wife just learned she’s pregnant; Walter (E.G. Marshall) has just been diagnosed with asthma that will eventually prove fatal if he doesn’t change jobs and relocate his family to a healthier environment; Arnold, the groom, confesses that he is a virgin and his sexual insecurities have him rethinking his wedding plans; Eddie, the only remaining bachelor in the group, is revealed as a desperately lonely man despite his bravado and active social life.

Chayefsky had already presented The Bachelor Party to great critical acclaim on television on the Philco-Goodyear Television Playhouse in 1953 with Eddie Albert in the lead. After being approached by Harold Hecht who had also produced his Oscar®-winning drama Marty along with partner Burt Lancaster, Chayefsky agreed to adapt the teleplay for the big screen. He hoped to duplicate the success of Marty which had also been based on a critically acclaimed television production. Instead of just making two characters the focus of the film as in Marty, however, Chayefsky weaves a dramatic narrative involving eight characters, though Don Murray as Charlie is clearly the film’s main protagonist.

Don Murray in The Bachelor Party (1957), directed by Delbert Man

For The Bachelor Party, Hecht and Chayefsky reassembled many of the same crew who had worked on Marty – director Delbert Mann, cinematographer Joseph LaShelle, art director Ted Haworth, makeup artist Robert J. Schiffer and others. In his autobiography, Looking Back…at Live Television and Other Matters, Delbert Mann recalled that The Bachelor Party “was to be done in the same manner we had done Marty: exteriors shot in New York, the balance of the film in Hollywood, again on Stage 5 at the Goldwyn Studios. This film, which deals with a young marriage at a crisis point, provided me with one of the best ensemble casts I have ever had. Since all but two were from our live television days, it was a group of long-time friends who assembled in the small gym on the Goldwyn lot to begin rehearsals. Don Murray, one of the two actors I had not worked with previously, played Charlie…The newcomer to this New York-based group was Carolyn Jones, in the as-yet-undefined role of the girl Charlie meets at a party in Greenwich Village. The character had no name. She was called only ‘The Existentialist.'”

Don Murray and Carolyn Jones star in The Bachelor Party (1957).

The rehearsals took place over a three week period with the actors and director perfecting the performances and staging of scenes but Chayefsky and Mann were never quite satisfied with the resolution of a crucial encounter in the film – where Charlie is tempted to betray his wife in a sexual tryst with “The Existentialist.” The problem was not the scene as written but the emotional motivation for what happens. Eddie “suddenly realizes that betrayal of his marriage vows will not answer his problems. He leaves her and the party. What this moment of revelation or recognition was, Paddy and I never fully found to our satisfaction.”

Paddy Chayefsky at his typewriter circa 1950s.

Toward the end of filming, they returned to the bedroom scene between Murray and Jones after identifying the problem. “The key to Charlie’s suddenly seeing her for what she was, was not clear or precise,” Mann recalled. “We rehearsed it, we discussed the scene again and again, we improvised the moment. Exhausted, I had thrown myself down on the bed…Paddy was pacing and muttering. Suddenly he said, “I’ve got it! Lemme think about it. I’ll have it for you in the morning!” He had seen the need for the transposition of some of the girl’s lines, putting the focus on what the scene is basically all about: her sudden and unexpected release of desperation the moment he puts his arms around her. “Just say you love me…Just say you love me…You don’t have to mean it,” resisting his touch until he finally shouts violently and in anger, “I love you! I love you!’ The moment is suddenly a physical one. It was exactly the kind of almost sexual climax that had been needed. The next day, we shot the scene. It worked. Don was urgent and driven and exactly right. Carolyn was wonderful.” 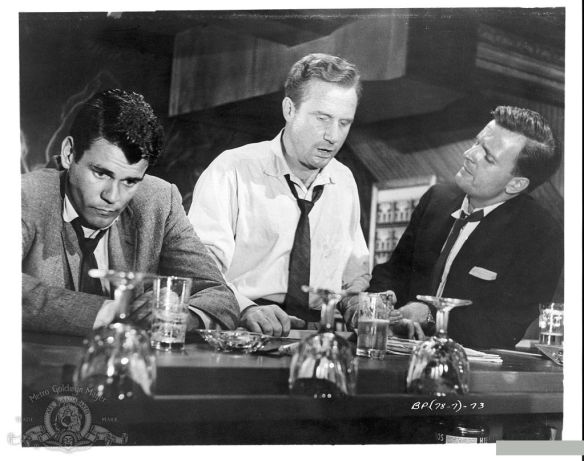 In an ironic twist of fate, Carolyn Jones, whose character didn’t exist in the teleplay and was added for the film, became the only actor in The Bachelor Party to be singled out for an Oscar® nomination. In fact, her nomination was the only Academy Award recognition the film would receive.

Prior to release, The Bachelor Party also attracted the attention of the National Catholic Legion of Decency which gave the film a “B” rating, adding that “only a positive conclusion averts a more stringent classification.” The filmmakers also had to appease the PCA (Production Code Administration, Hollywood’s self-censorship committee) which objected to the film’s “suggestion of abortion and the intended extramarital affair.” They defied the PCA, however, over promotional materials for the film which alluded to extramarital sex and refused to make changes, resulting in the withdrawal of the PCA seal of approval. This could have hurt the film’s box office profitability in more conservative regions but most newspapers ran the ads with the exception of a few such as The Boston Globe.

A stag party for a married man turns into a dark night of soul searching in Paddy Chayefsky’s The Bachelor Party (1957), directed by Delbert Mann.

Even if it didn’t garner as many awards as Marty, The Bachelor Party was regarded by most critics as more incisive and entertaining than the former film. Of course, there were a few dissenters such as Time magazine which wrote “…the message runs something like this: ‘Don’t cheat on your wife. Because if you do, you’ll never finish night school.’ At the risk of offending the entire prostitute population Playwright Chayefsky has come out firmly on the side of marital fidelity…(yet) genuine…insights have been skillfully translated to the screen…this is what Paddy Chayefsky truly understands…that life is really not worth living without love.” Even Chayefsky and Mann felt the film had some basic flaws which Mann later stated: “The ending is too easy, too glib. It comes off as moralizing, a pro-forma statement of the traditional values of love and marriage.”

E.G. Marshall stars as one of the not-so-happy revelers at The Bachelor Party (1957), written by Paddy Chayefsky and based on his original 1953 teleplay.

The positive reviews, however, prevailed with this posting from Archer Winston in The New York Post a typical reaction: “…The performances are highly individualized, and close to perfect…direction is the sort of artistry that can be too easily overlooked…It’s life, not art. So why give the director credit for holding up a mirror? Or, even Chayefsky? Just recollect that this sort of accident doesn’t happen except when Mann is directing [what] Chayefsky has written.”

Carolyn Jones and Don Murray in a publicity still for The Bachelor Party (1957), directed by Delbert Mann

The Bachelor Party would go on to win other awards during its theatrical run – a Best Picture nomination from the BAFTA (British Academy of Film and Television Arts), a Golden Palm nomination for Best Director at the Cannes Film Festival – and it provided a great showcase for up and coming actors such as Don Murray, Carolyn Jones, Jack Warden and E.G. Marshall. It should also be noted that the film provided memorable opportunities for Patricia Smith (as Don Murray’s wife) and Nancy Marchand, who would confirm her acting legacy as Livia, the mother of Anthony Soprano in the popular HBO TV series, The Sopranos (1999-2007). The Bachelor Party marked the feature film debut for Marchand. 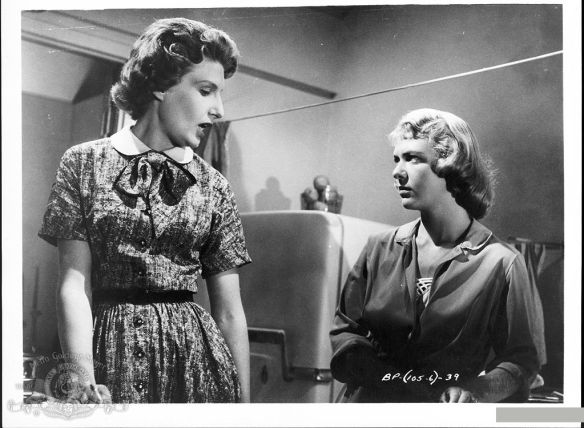 The Bachelor Party does not appear to be currently available on DVD or any format although there is a DVD of the original 1953 television version that aired on the Philo-Goodyear Television Playhouse.

*This is a revised and extended version of an article that first appeared on the Turner Classic Movies website.