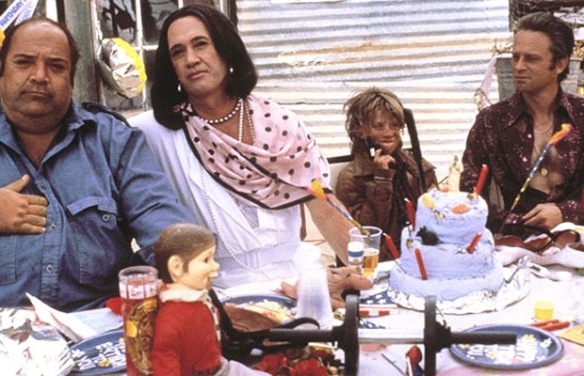 Occasionally a movie comes along that is so unclassifiable and non-mainstream that you have to wonder who the filmmakers were targeting as their intended audience. Sonny Boy (1989), directed by the virtually unknown Robert Martin Carroll, is a remarkable example of this quandary. Is it an exploitation movie with art-film aspirations? The casting alone – David Carradine, Brad Dourif, Paul L. Smith, Sydney Lassick and Conrad Janis – has built-in cult appeal but the highly eccentric storyline and grotesque characters are completely polarizing. Either you’ll tune out immediately or watch in fascination and disbelief. It is hard to imagine an indifferent viewer.

According to director Carroll, he saw Sonny Boy as “a complex film with lots to explore. I knew it was troubling while I made it. I kept asking them [the producers] what audience they were going for. When they told me not to worry, I didn’t. I just went for it. I always like to make complex characters that keep the audience guessing as to what they will do.” 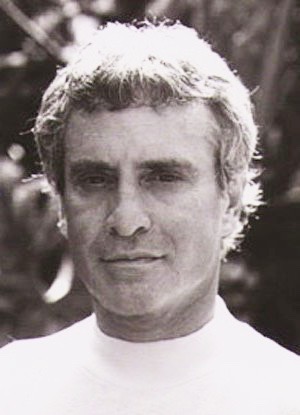 Set outside the sparsely populated desert community of Harmony, New Mexico (not a real place) in 1971, the film covers almost eighteen years in the lives of a criminal clan that includes Slue (Paul L. Smith), the brutal ringleader, his companion Pearl (David Carradine in drag), Weasel (Brad Dourif), a sociopathic accomplice, and Charlie P. (Sydney Lassick), a wheeler-dealer businessman who often acts as a front for the group. As the film opens, Weasel ambushes a young couple at a motel, kills them and steals their car and belongings to sell. When he presents his score to Slue, they discover the couple’s infant son in the back seat. Pearl begs to keep the boy (the title character) as their own but Slue ends up appropriating the child for his own purposes. 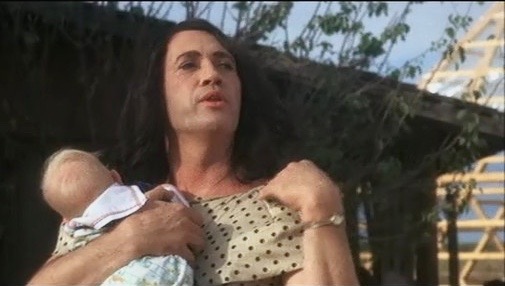 David Carradine as Pearl in the 1989 cult film, Sonny Boy

At Sonny’s sixth birthday party, Slue begins a cruel regime of abuse, endurance tests and deprivation intended to slowly transform the boy into an animalistic avenger for the clan, much like a pit bull trained to kill. First he amputates the boy’s tongue and then confines him in a metal container where he is fed scraps through an opening. Occasionally Sonny Boy’s thoughts are presented as voiceover narration, revealing his own warped perception of reality. (It’s highly possible this device was inspired by Terrence Malick’s Badlands (1973) and Days of Heaven (1978) in which Sissy Spacek and Linda Manz, respectively, were used as observer/narrators.) Reliving his sixth birthday party, Sonny says: “Father cut loose my tongue. A present for my birthday.The gift of silence. Pearl, she put my voice in the freezer for safekeeping. Then we had sweet cake.” 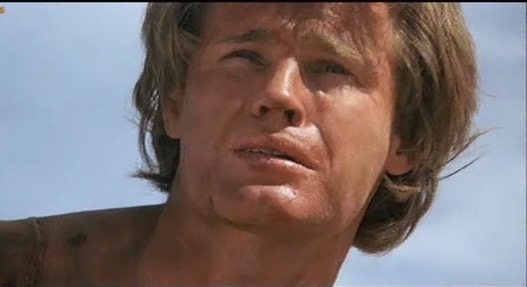 As Sonny grows up, we witness his sadistic treatment through vignettes that show him being dragged through the desert by a car, tied to a pole within a blazing circle of fire and fed live chickens for food. Slue’s reprogramming is so effective that Sonny perceives every new torment as a game of skill that he must master. Once he turns seventeen, however, Sonny becomes Slue’s secret weapon in a power struggle with the mayor of Harmony and commits his first kill. Slue then hatches a new scheme to invade the art world using Harmony as their base: “We drive across the state line into California. We got Bel-Air, Beverly Hills. We have a kid who can eat his way right through their golden gates and we have this town to protect us.” 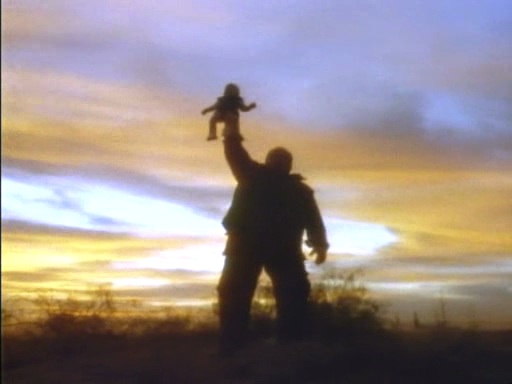 [Spoiler alert] Of course, Things don’t go as planned. Sonny becomes infatuated with a blonde girl from the town named Rose (Alexandra Powers) and goes on the lam. Meanwhile, the Harmony townspeople rise up against Slue’s tyranny. It all ends in a Sam Peckinpah-like shoot-out in which Slue and Pearl go down with guns blazing in slo-mo glory. But for Sonny Boy, there’s a happy ending. The local doctor/surgeon (Conrad Janis) restores his severed tongue and Sonny might even end up with Rose.

Sonny Boy is open to multiple interpretations and is certainly not a routine or formulaic exploitation film. It could be seen as a cruel, contemporary fairy tale similar to the macabre and violent stories of the Grimm Brothers in their original German form. Or it could be perceived as an allegory about child abuse or maybe an attack on normalcy and conformity. For a film about a self-made “family” of psychotic misfits, it could easily have gone the route of The Texas Chainsaw Massacre or The Hills Have Eyes but instead of settling for a more horrific approach, director Robert Martin Carroll creates a dream-like atmosphere that is closer to the cinema of David Lynch. The desert setting, the muted colors and soft focus cinematography (by Roberto D’Ettorre Piazzoli) have an almost hallucinatory beauty about them.

The performances, as expected, are exceedingly eccentric but that is completely appropriate for the characters and storyline. Paul L. Smith made a career out of playing heavies based on his physical appearance alone and he isn’t required to do much more here than glower, stomp and bulldoze his way through every scene. He also has a swagger in his walk that shares similarities with James Gandolfini’s Tony Soprano but even if his acting range is narrow, he commands the screen as a monstrous brute of a father figure. 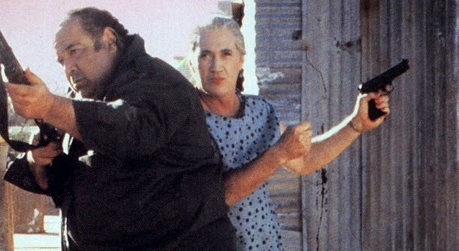 Like Smith, Brad Dourif is either a victim of typecasting or naturally attracted to extreme characters and his performance as Weasel doesn’t deviate much from other weirdos he has played before but his manic intensity and demented sense of humor blends in perfectly with his amoral cohorts. In a Psychotronic Magazine interview, Dourif stated, “I thought it was the first real heavy-metal fable. It was just wild…didn’t really quite understand it but I was drawn to it.”

In contrast, Sydney Lassick as Charlie functions more as low-key comic relief than a genuinely threatening character but he too is a complete sociopath. He just happens to have slightly better social skills than the rest of the gang. The true wild card in the group, however, is Pearl played by David Carradine in a hilariously bizarre change of pace role. He definitely rises to the challenge and delivers a performance that is both sweetly endearing and creepy. 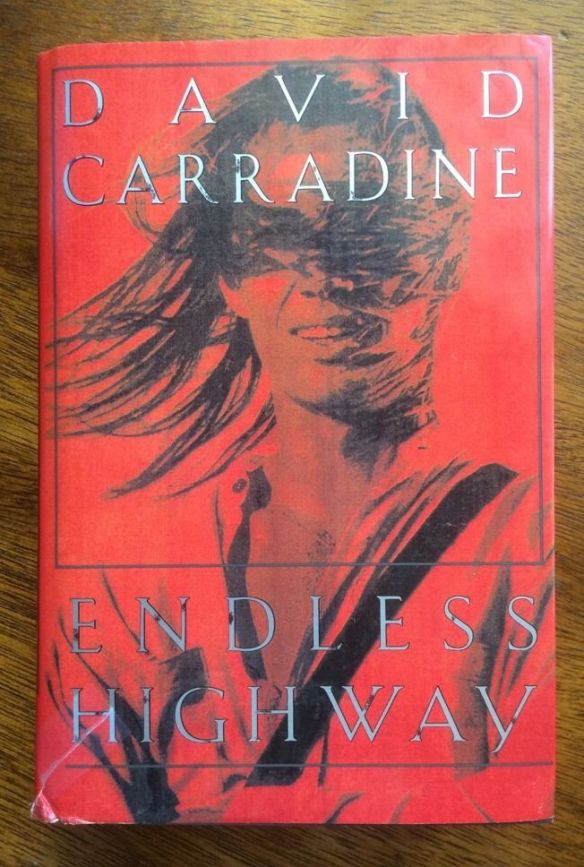 In his autobiography Endless Highway, Carradine described Sonny Boy as a mixture of Bonnie and Clyde, Bringing Up Baby and The Rocky Horror Picture Show. I don’t think anyone else will agree with that assessment but his take on Pearl is dead-on: ”I wore a dress throughout the movie, not like a drag queen but more like a midwestern housewife – dressed in a slip and a polka-dot housecoat with sensible shoes…in the sixties, I wear a Joan Crawford wig; in the seventies, a Jane Wyman flip; and in the eighties, a Mammy Yokum gray bun at the back. I took out my teeth for the old lady. I made the ugliest woman imaginable, except for the old broad, to whom I lent a certain venerable, statuesque beauty.” 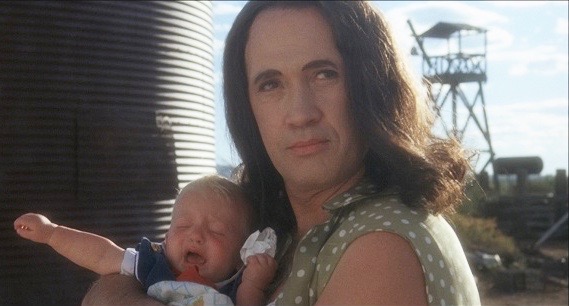 As for the title role, Michael Griffin (now known as Michael Boston) is no more than adequate in his screen debut and isn’t required to do much more than grovel around on all fours and serve as a purely physical presence. He spends most of the movie barefoot and shirtless with his torso caked with sweat, grime and blood. Considering the lifetime of abuse he has endured, he should be hideous in appearance instead of looking like a buff model who was rolled in the dirt. According to Graeme Whifler, who wrote the original screenplay and wanted to direct the film (but was denied the opportunity by producer Ovidio G. Assonitis), Sonny Boy was supposed to be a disfigured monster. He also said the character was inspired by a story he heard from a biker gang in San Francisco that related a true tale about a kidnapped child from Indiana who was raised by a car thief to be a murderer.

The fact that a movie like Sonny Boy ever got made is certainly stranger than fiction and if you want to know more about its strange production history, you should definitely check out the Shout! Factory Blu-Ray of the film (released in January 2016) which includes audio commentaries by screenwriter Whifler and director Carroll on separate tracks. Here are just a few of the behind-the-scene tidbits you’ll learn:

The Pearl character was originally outfitted with prosthetic black mammaries which were mostly censored out of prints.

Smith and Carradine were allegedly offered the roles of either Slue or Pearl and Smith opted for the former (Can you image him as Pearl?). During production the two actors did NOT get along well which generated considerable tension on the daily set.

Sonny Boy was filmed in Columbus and Denning, New Mexico. 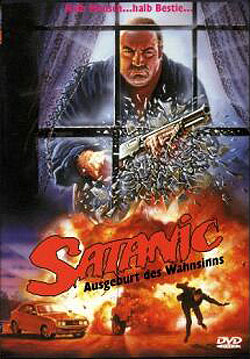 An alternative film poster for the international market

The film was poorly distributed and few people saw it on its initial release after it sat on the shelf for more than a year. With one or two exceptions, the scant critical response was completely negative. Director Carroll later admitted, “Sonny Boy essentially stopped my career. While a few people loved it such as Dennis Dermody of Paper Magazine in NY who voted it the Best Film of the Decade in a Village Voice critics poll, many were just disgusted. My agent actually let me go because a famous producer she worked with said she hated it so much that she wouldn’t work with her again if she represented me. Wow, that hurt.”

Over the years, however, Sonny Boy’s reputation has improved thanks to VHS and DVD bootlegs of the film as well as TCM airings in their late night Underground franchise on more than one occasion. But the Shout! Factory Blu-Ray is the optimum way to experience it. It’s definitely not for everyone but here are some sample reviews that demonstrate the wide range of viewer reactions. 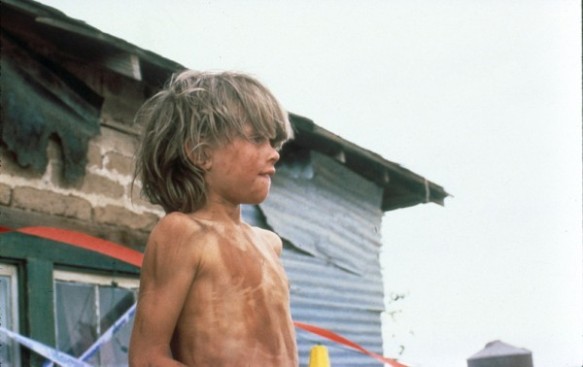 “Repulsive, socially unredeemable waste of celluloid… Filmed for no apparent reason except to offend and appall.”
Leonard Maltin Movie and Video Guide

“An oddly compelling study of family pathology with blackly comic undertones…Carradine and Smith make an unexpectedly engaging couple, and the supporting work is all strong. Sonny Boy is a heady, offbeat mix of myth, social drama, and psychological thriller that is added testimony to the creative vitality to be found in the B-movie fringe.”
TV Guide

“There are some moments where Sonny Boy shines, but the film is tedious and dull for the most part, hampered by poor direction, a pretentious script and acting which wildly misses the mark.”
George Pacheco, Rock! Shock! Pop!

“There are certain films in the annals of home video which continue to maintain an aura of supreme weirdness, and among American productions, this oddity stands out for being criticized as tasteless, depraved, cruel, and patently wrong, but it’s also one of those films where the legend may have exaggerated the actual work….Carroll’s film isn’t a cinema turd nor work of bankrupt morality, but its main flaws lie in the frequent wavering between black comedy and earnest drama.”
Mark R. Hasan, KQEK

“All of the actors are excellent. Not just a sick exploitation movie, Sonny Boy has many inspired, funny, and surprising moments. Even the simple desert set is great and could have been inspired by old Krazy Kat comics.”
Psychotronic Magazine

“For the last hour, this is like a white-trash version of Frankenstein. But your jaw will be slack for the first half an hour wondering what the hell is going on.”
Zev Toledo, The Worldwide Celluloid Massacre 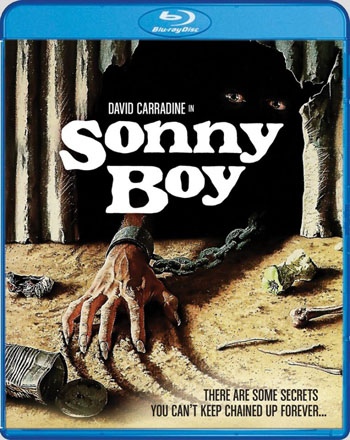