Most moviegoers know Howard Keel as the brawny, baritone singing star of such MGM musicals as Show Boat (1951), Kiss Me Kate (1953) and Seven Brides for Seven Brothers (1954) but occasionally the actor would appear in straight dramatic vehicles such as Desperate Search (1952) or Ride, Vaquero! (1953), which proved he was more than competent as a rugged leading man. Floods of Fear (1959), one of his least known films, falls into this latter category and is a surprisingly taut and suspenseful thriller that was originally serialized in The Saturday Evening Post under the pulp fiction title of A Girl, a Man and a River.

Howard Keel (on right) attends to an injured man while Anne Heywood and Cyril Cusack look on in Floods of Fear (1958), directed by Charles Crichton

Filmed in England at Pinewood Studios, Floods of Fear was Keel’s second film production in Great Britain; the first was his movie debut, The Small Voice (aka The Hideout) in 1949. At this point in his career, Keel was no longer under contract to MGM (1955’s Kismet was his last film for them) and he was accepting freelance work in television (a 1958 remake of Roberta) and film (Frank Borzage’s big budget 1959 epic, The Big Fisherman). 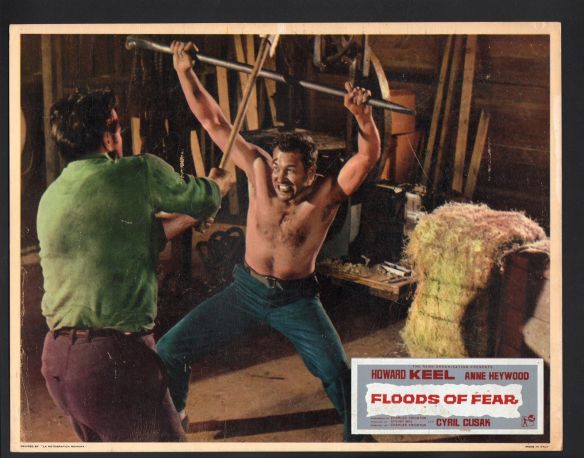 Howard Keel as an escaped prisoner (who was falsely incarcerated) defends himself in Floods of Fear (1958).

Floods of Fear, produced by Sydney Box (The Seventh Veil, 1945), was a decidedly different role for Keel, however, and played against his clean-cut hero image. In this film, he plays a hardened convict named Donovan who escapes from a prison detail while helping build a barrier for an impending flood. The raging waters not only sweep away Donovan but also a fellow prisoner, Peebles (Cyril Cusack), and the guard, Sharkey (Harry H. Corbett), who was supervising them. The trio wash up at the flooded farmhouse of Dr. Matthews (John Phillips), who is away attending victims at a crisis center. At first the three survivors think the house is abandoned until Elizabeth (Anne Heywood), the doctor’s daughter, appears and the tension begins.

While Peebles is clearly a dangerous criminal with designs on Elizabeth, Donovan is a more brooding, tight-lipped enigma who is serving time for murdering the wife of his former business partner, Jack Murphy (John Crawford). It soon becomes obvious that Donovan was framed for that crime and now that he is free, he intends to find Murphy and take his revenge. But first the small group must survive the torrential rains and flooding that swamp the house and continue to rise with no help in sight.

In his autobiography Only Make Believe: My Life in Show Business, Keel recalled the filming of Floods of Fear: “All the flood scenes were filmed on one of the large stages at Pinewood Studios. The water had to be both dirty and cold, and it was. They couldn’t heat it for fear it might get rancid. That was another tough picture. Anne Heywood never once protested about the water. [Charles] Crichton, who had a great sense of humor, had directed some very funny pictures. Cyril Cusack and I were good friends. We had a little contest over Anne. He was a real cutie, as well as a hell of an actor, but I won out.” 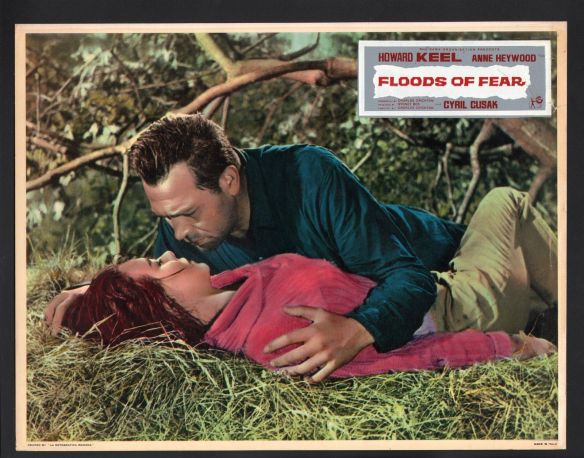 A brief romantic interlude for Howard Keel and Anne Heywood in the disaster drama, Floods of Fear (1958)

If Floods of Fear was a change of pace for Keel, it was also true for the director as well. Crichton was best known for such popular Ealing comedies as The Lavender Hill Mob (1951) and The Titfield Thunderbolt (1953) and the late career hit, A Fish Called Wanda (1988). In comparison, Floods of Fear is a B-movie gem which combines film noir elements with the excitement of a disaster film.

Beautifully shot by award-winning cinematographer Christopher Challis (The Victors [1963], Arabesque [1966]) with a stirring score by Alan Rawsthorne (Pandora and the Flying Dutchman, 1951), the film is also distinguished by the fine ensemble acting, especially by Cyril Cusack as the malicious and homicidal Peebles. He has a volatile nervous energy and feral-like physical quality that could easily have served as an inspiration to Tim Roth, who somewhat resembles Cusack in size and manner in such movies as Made in Britain (1982) and Pulp Fiction (1994). 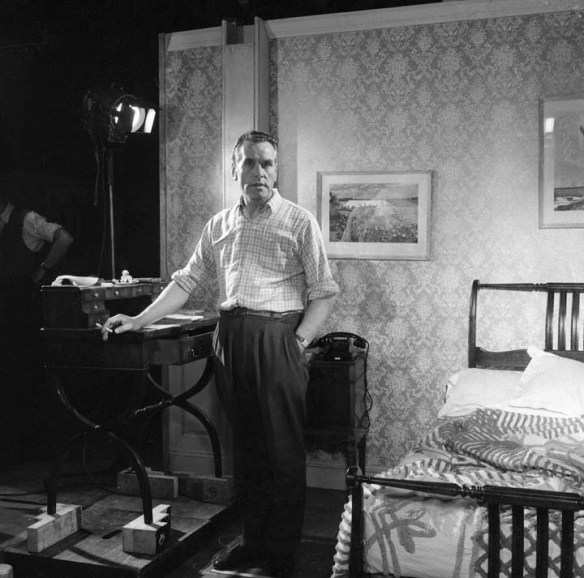 Director Charles Crichton on the set of Floods of Fear (1958)

Floods of Fear is not currently available on any format in the U.S. but if you have an all-region DVD/Blu-Ray player you may be able to find a copy of it from European distributors. It also has aired before on Turner Classic Movies and may again in the future.

Anne Heywood has a panic attack in the disaster drama, Floods of Fear (1958) 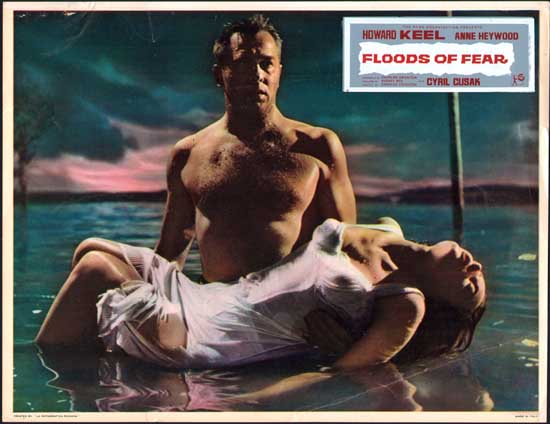