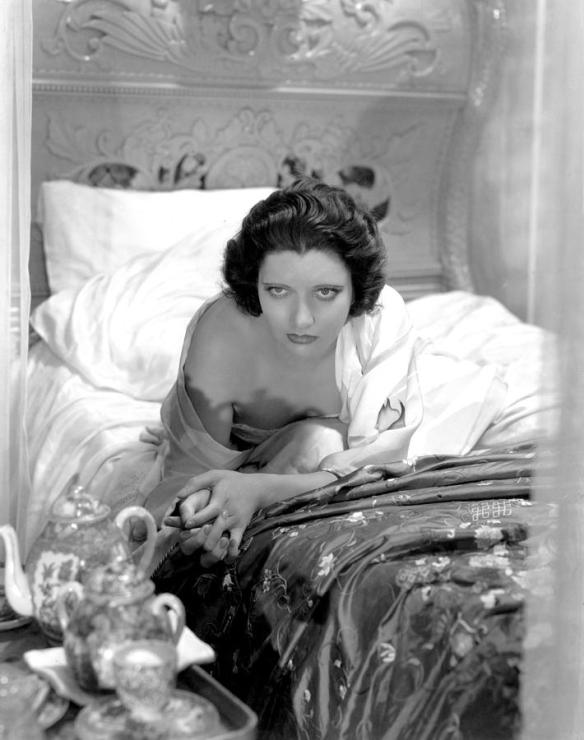 Kay Francis has that come-hither look in Mandalay (1934), an often overlooked Pre-Code drama

Today her place in film history rates little more than a footnote in the ascendancy of Warner Bros. as a major Hollywood studio, but Kay Francis was their first major female star whom they had lured away from Paramount in 1931. During her peak years for the studio between 1932 and 1935, she specialized in melodramas, soap operas and lightweight comedies which accented her elegance and chic fashion sense but also stereotyped her in increasingly inferior films.

She was dethroned by Bette Davis as Warners’ top star in 1936 and, by 1938, she was labeled “box office poison” in an article by The Hollywood Reporter. Still, there are several essential must-see titles among the more than sixty-five movies that she made (Ernst Lubitsch’s Trouble in Paradise [1932], Jewel Robbery [1932], Wonder Bar [1934], for example) and Mandalay (1934) is one of her best dramatic showcases as well as an enormously entertaining, eyebrow-raising Pre-Code wonder. (It was made before the Code was officially enforced but released after the fact.)

Tanya (Kay Francis), a Russian refugee living in Rangoon, is romantically involved with Tony (Ricardo Cortez), a gunrunner with ties to underworld connections. When he finds himself in deep debt to Nick (Warner Oland), the owner of the notorious nightclub Jardin d’Orient, he abandons Tanya there with the understanding that Nick will put her to work as the “club hostess” in exchange for his debts. At first despairing, Tanya quickly decides to follow the advice of Madame Lacalles (Rafaela Ottiano), the former club hostess, who tells her, “You’ll find out that it’s easier to make men do what you want them to, than to fall in love and have them make a fool of you. Anyway, you’re pretty enough to go a long way if you use your head.” Tanya’s rise to waterfront fame and notoriety as “Spot White,” the star attraction at the Jardin d’Orient, gets her threatened with deportation and a morals charge but she uses blackmail against the accusing authority – a former customer – and manages to escape Rangoon on her own terms on a ferry boat bound for Mandalay.

Traveling under the name Marjorie Lang, Tanya finds herself drawn to fellow passenger Dr. Gregory Burton (Lyle Talbot), an alcoholic with a troubled past. A romance begins to develop between the two lost souls when the ferry stops for new passengers and Nick comes abroad, anxious to win Tanya back and put her to work as the hostess of his own nightclub.

Ruth Donnelly, Lyle Talbot (center) and Lucien Littlefield are enjoying a vacation outside the law in Mandalay (1934), directed by Michael Curtiz

While Mandalay was treated no differently by the studio brass than any other programmer churned out in assembly-line fashion, director Michael Curtiz brought a sense of style and vitality to the film which distinguishes it from other B-movie potboilers. Although it was shot on the Warners’ backlot, Curtiz creates an atmospheric and exotic recreation of the Rangoon waterfront and its decadent, nocturnal world of gunrunners, shady businessmen, entertainers and cafe girls. Mandalay is also brimming with lurid situations and details that managed to escape the censor’s scissors, even though Warner executive Hal Wallis was well aware of the movie’s objectionable content and noted it in interoffice memos to Curtiz.

Here is one memo to Curtiz dated October 21, 1933: “I am just looking at your dailies…Generally your stuff is beautiful and I don’t want to start limiting you and restricting you…However, when you show [contract star] Kay Francis in the bathtub with [contract star Ricardo] Cortez in the shot and a close-up of Kay Francis in the tub and show her stepping out of the tub and going into Cortez’s arms, then you get me to the point where I am going to have to tell you to stick to the script and not to do anything else. For God’s sake, Mike, you have been making pictures long enough to know that it is impossible to show a man and a woman who are not married in a scene of this kind. The situation itself, is censorable enough with Cortez and Francis living [together]… Hal Wallis” (from Inside Warner Bros. (1935-1951) by Rudy Behlmer). The scene in question in Wallis’ memo is one of the sexier post-Code screen moments as Francis drops her bath towel to the cabin floor as the camera provides us with an erotic image of the actress’s lovely bare legs, still glistening with beads of water from her bath. 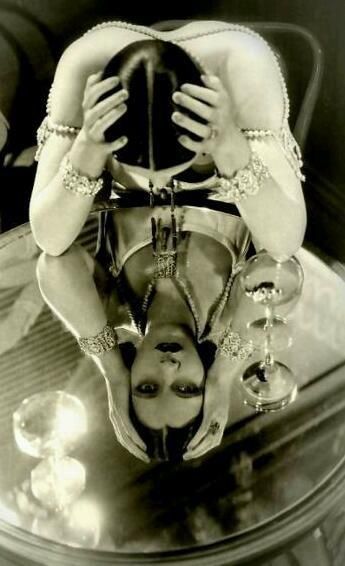 Wallis also fired off a cautionary memo to screenwriter Robert Presnell about his depiction of the Jardin d’Orient: “Naturally, in the scene in the Orient Cafe, it should be shot carefully, that is, making it more of a night club and gambling house than to indicate that it is a hook shop [House of prostitution]. I don’t feel we are sacrificing anything by doing this because people will put their own interpretation on it and know what kind of an establishment it is and what Francis is doing there…” 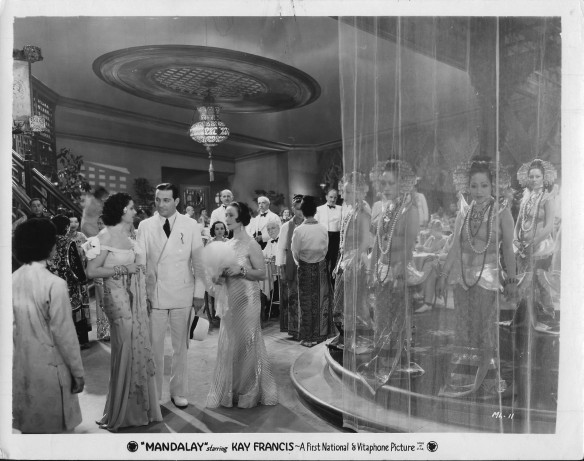 Often Presnell was able to convey the obvious in his dialogue by having the characters talk circles around it such as this exchange between Tanya and Tony when he first brings her to the Jardin d’Orient and she observes the provocatively dressed female servers.

Tanya: “All these girls. What are they?”

“I mean exactly that my dear…”

Kay Francis, striking a typical pose, in Mandalay (1934), one of the great, lesser known Pre-Code films

In other scenes, however, Curtiz accents Francis’s physical allure, particularly in one sequence where we first see her as her alter ego, “Spot White,” descending a staircase in a tight, sparkly dress with a white fur. Curtiz then cuts to a series of reaction shots of the male customers, mostly tight close-ups, in which lust, desire and more indecent thoughts can be read flashing across their faces. It’s reminiscent of a similar scene in William Wellman’s Pre-Code melodrama, Safe in Hell (1931), in which fugitive-from-justice Dorothy Mackaill makes her first appearance before the assorted criminals, deviants and assorted male riff-raff in her desert island boarding house. 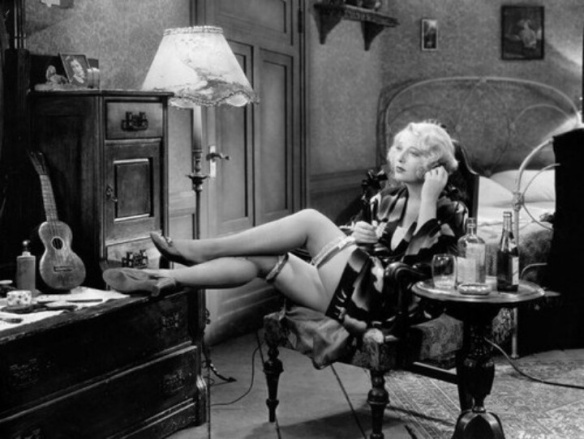 Dorothy MacKaill plays a less than elegant ‘cafe girl’ in the down and dirty Pre-Code drama, Safe in Hell (1931), directed by William Wellman

[Spoiler Alert] Even the resolution to Mandalay is unexpected. When Tony returns to strong-arm Tanya into joining him as a business partner after faking his death earlier, she poisons him and, in agony, he staggers to a window and falls out of it into the river below. There are no witnesses to his murder and since he was already assumed dead, Tanya escapes punishment. 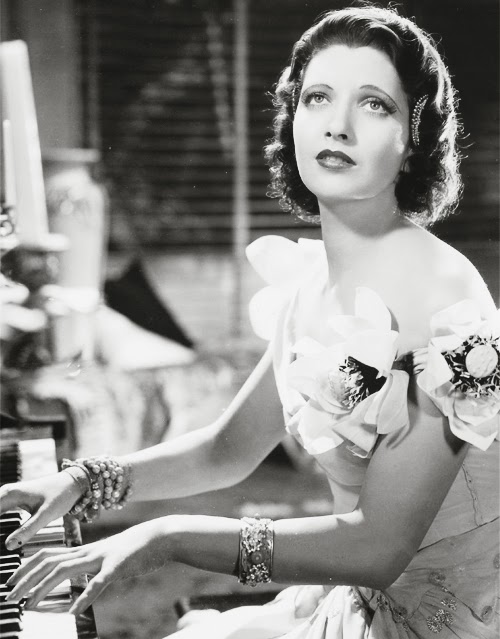 Kay Francis plays a woman of many talents in the Pre-Code melodrama, Mandalay (1934)

The movie ends on a close-up of her beatific face as she disembarks for Mandalay with her new lover, Dr. Burton. They are on their way to help cure villagers suffering from the plague and while it is suggested that they both may die of the same, Tanya escapes the fate of most post-Code heroines who have sinned and committed murder. There is a sense of redemption and salvation in that final shot that mirrors the closing scene in Jezebel (1938) in which Bette Davis and Henry Fonda are transported to a leper colony for quarantine. 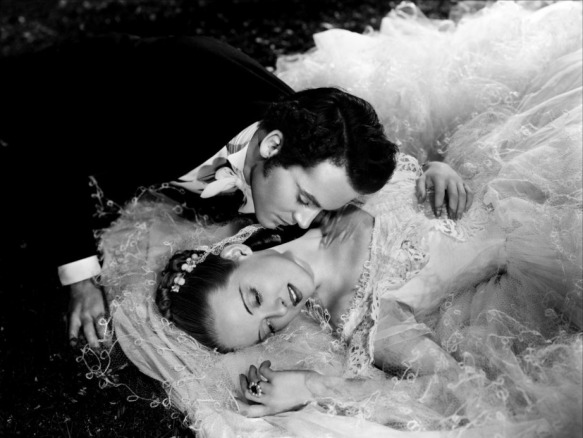 Kay Francis’s performance in Mandalay proves she was more than just a stylish mannequin, dressed in designer clothes and jewels. She convincingly runs the gamut of emotions here from ecstasy to despair to tough-as-nails fortitude to desperation, even if the storyline is often absurd. And she’s backed up by a solid cast of Warner contract players such as Ricardo Cortez, oozing betrayal and avarice out of every pore as Tony, Warner Oland, sinister despite his Asian character stereotype and makeup, and Ruth Donnelly, who provides some welcome comic relief in the film. In her brief scene with Francis, she slips in some clever digs at male/female relationships and the double standard: “You certainly can wear clothes. You know I bought a dress in Paris. My husband made me take it off. Said I looked nude. You know, like a wet seal. It’s funny how men are. They like to see other women wear things like that but want their own wives to wear Mother Hubbards. Haven’t you noticed?” 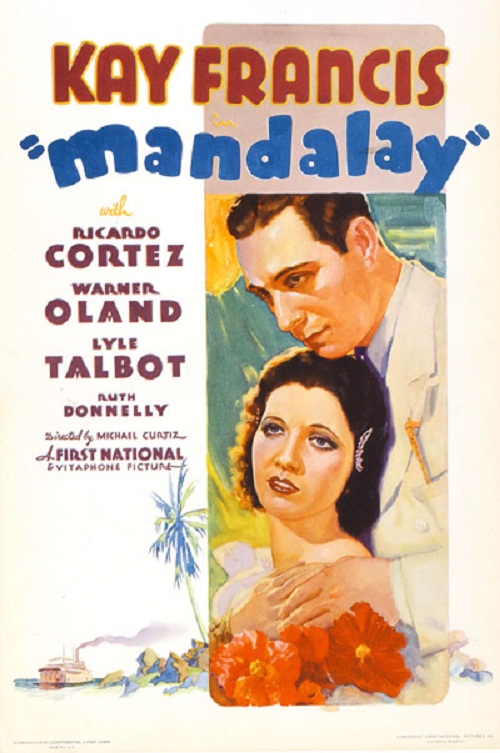 Mandalay proved to be another moneymaker for the studio and was well received by most critics, even if it wasn’t perceived as anything more than a well executed B-movie. Francis was still popular at this point in her career but she was already being assigned parts rejected by other actresses. Mandalay had supposedly been slated as a project for Ruth Chatterton.

Ruth Chatteron, the critically acclaimed star of such films as Madame X (1929) and Dodsworth (1936)

The film is also significant as one of Shirley Temple’s early appearances – most of her scenes were deleted except for a brief shot of her being carried in a woman’s arms. She wouldn’t become a full-fledged movie star until the release of Little Miss Marker later that same year.

Mandalay, which is often broadcast on Turner Classic Movies is available as one of four films in the DVD collection,  Forbidden Hollywood: Volume 6 from Warner Archive. It is not available as a single disc. The other films in the collection include The Wet Parade, Downstairs and Massacre.

* This is a revised and updated version of an article that originally appeared on the Turner Classic Movies website.

Sources for this article include Inside Warner Bros. (1935-1951) by Rudy Behlmer; Kay Francis: A Passionate Life and Career by Lynn Kear & John Rossman; The Casablanca Man: The Cinema of Michael Curtiz by James C. Robertson; The Dame in the Kimono by Leonard J. Leff & Jerold L. Simmons 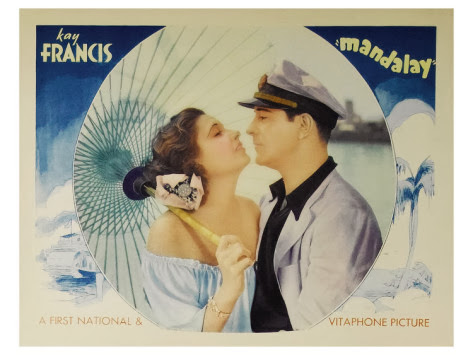 1 thought on “Kay Francis as the Notorious ‘Spot White’”