In 1941, the unexpected success of Buck Privates – a whopping $10 million dollar B-movie blockbuster – officially launched the comedy team of Abbott and Costello who became Universal Studios’ most profitable film franchise for more than a decade (The duo made their debut in One Night in the Tropics (1940) in supporting roles but the musical comedy with top billed Allan Jones and Nancy Kelly was not a boxoffice hit). Naturally, it inspired other studios to follow suit but it wasn’t as easy as it looked. Case in point – Wally Brown and Alan Carney (no relation to Art Carney), two former nightclub comedians recruited by RKO for a series of low-budget farces beginning with The Adventures of a Rookie (1943), a blatant attempt to ape the formula of Buck Privates. For critics who thought the humor of Abbott and Costello was déclassé, Zombies on Broadway (194) was a further step down but perfect for eight year old boys who enjoyed the simple concept of two nitwits with one (Brown) assuming superiority over his dim bulb pal (Carney). 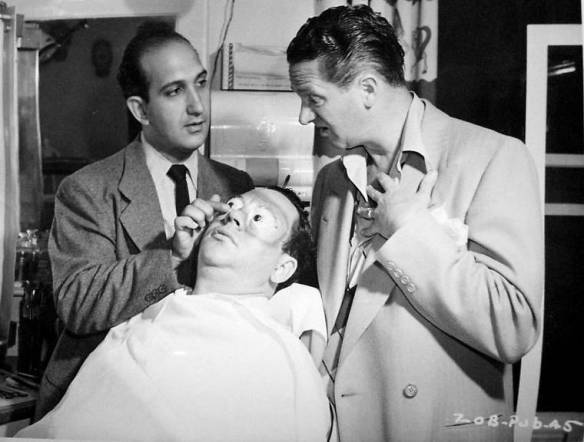 Alan Carney (in makeup chair), Wally Brown on the right

Certainly Brown and Carney posed no threat to Abbott and Costello and are mostly forgotten today, but their most representative film, Zombies on Broadway (1945), might have actually inspired Universal to match up Bud and Lou with monsters with their popular genre parody, Abbott and Costello Meet Frankenstein (1948).

Filmed on leftover RKO sets from Tarzan and the Amazons (1945) and Val Lewton’s I Walked With a Zombie (1943), Zombies on Broadway even featured two actors from the latter film – calypso singer Sir Lancelot and Darby Jones, repeating his role as a zombie with ping pong ball-like eyes.

The plot revolves around two inept Broadway press agents (Brown & Carney) ordered by their gangster boss (Sheldon Leonard) to produce a real zombie for the grand opening of his new night spot, “The Zombie Hut.” Their search leads them to the tropical isle of San Sebastian where they encounter the suspicious Dr. Paul Renault (Bela Lugosi). Although Renault’s henchman tells the duo that the good doctor is there “to study a blight that affects banana trees,” we know he is busy trying – and failing – to create the perfect zombie. And Brown and Carney, along with a local cabaret performer (Anne Jeffreys), are ideal guinea pigs for the mad scientist’s on-going experiments.

Why can’t we have a zombie nightclub like this one?

In the slapstick hijinks that ensue – and yes, there’s a monkey involved – Carney gets transformed into a zombie and is brought back to New York as the night club’s star attraction. Right before the curtain rises with the audience chanting “We want a zombie!, We want a zombie!”, there is a last minute change of plans, the result of a stray hypodermic needle containing the zombie potion. 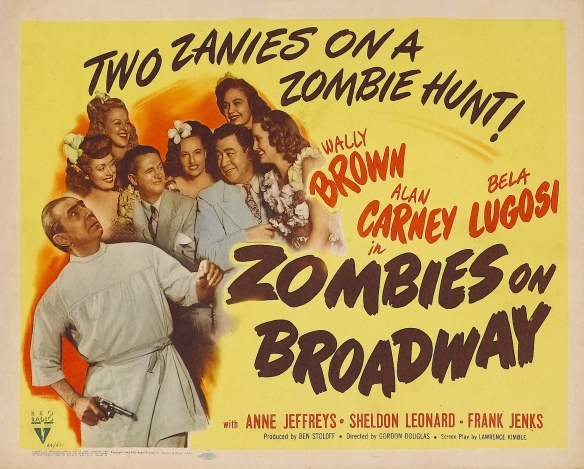 Bela Lugosi had just completed a minor supporting role, teamed opposite Boris Karloff, in The Body Snatcher (1945) for producer Val Lewton when he signed on for Zombies on Broadway, directed by Gordon Douglas (Them!, 1954). It wasn’t the first time he had parodied his horror film image – he’d been tormented by the Bowery Boys earlier in Spooks Run Wild (1941) and Ghosts on the Loose (1943). But here Lugosi plays it relatively straight and the contrast between his dark, glowering demeanor and Brown and Carney’s goofiness worked well. So well, in fact, that RKO teamed them up for a sequel, Genius at Work (1946), with Anne Jeffreys again providing the sex appeal.

While Zombies on Broadway proved to be an agreeable programmer for undiscriminating audiences of the forties, it was mostly dismissed by critics such as the New York Herald Tribune which called it “an appalling little film.” Even future director Joe Dante, a teenage correspondent for Famous Monsters of Filmland, dismissed it in his article on the most feeble horror films of all time: “Pretty funny except when it was supposed to be!….The comedy scenes were pretty grim, playing in a style that reminded one of Abbott and Costello with the Black Plague.”

True, a lot of the comic patter falls flat and there are those cringe-inducing moments of racial stereotypes played for comedy that were typical of its era – the nervous black janitor, superstitious natives, etc. But even with all of those handicaps, it’s not as bad as its reputation and even Michael Weldon’s The Psychotronic Encyclopedia of Film proclaimed it “a very strange film,” which is some kind of recommendation.

Nick Stewart as Worthington in Zombies on Broadway (1945)

The funniest scenes involve Carney – one where he gets his foot stuck on an ox skull, another where he emits a “silent scream” as he’s abducted from his bed, and all of his scenes as a pop-eyed zombie. His makeup is hilarious and maybe the reason these sequences work so well is because Carney is mute – there’s no thudding dialogue to deliver and the humor is purely visual.

Alan Carney with his new zombie eyes, Anne Jeffreys in the background in Zombies on Broadway (1945)

Also, Anne Jeffreys is appropriately sassy as the knife-throwing nightclub chanteuse and it’s hard to forget Darby Jones as the main zombie; his uniquely angular body is just as distinctive as Michael Rennie’s alien in The Day the Earth Stood Still (1951). Best of all is that title which is bound to produce smiles of disbelief whenever you mention it to fellow film travelers.

Zombies on Broadway is currently on DVD as part of the Karloff & Lugosi Horror Classics box set available from Warner Home Video; the other titles include The Walking Dead (Karloff), Frankenstein 1970 (Karloff) and You’ll Find Out with Karloff, Lugosi AND Peter Lorre. 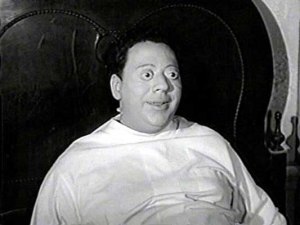 Alan Carney likes the zombie lifestyle in Zombies on Broadway (1945) 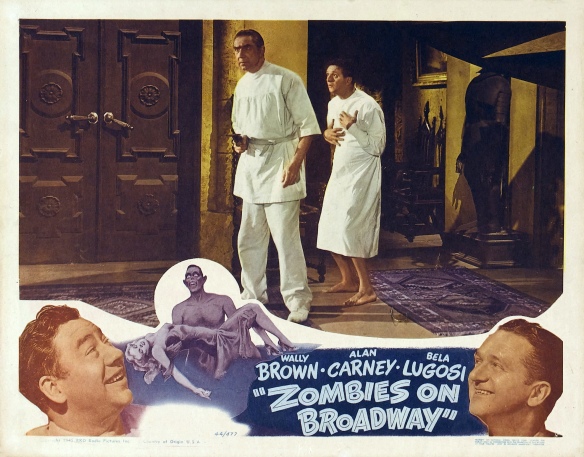