It’s hard to imagine a more unlikely prospect for a film adaptation than John Cheever’s short story, The Swimmer, which was first published in The New Yorker. Yet, it was actually adapted into a major motion picture from Columbia Pictures starring Burt Lancaster. Was it a success? Hardly. Even though a handful of critics endorsed it, the public stayed away but for some who were lucky enough to see it, the film resonated for years. Now it is available on Blu-Ray and DVD from Grindhouse Releasing and a reassessment is in order. 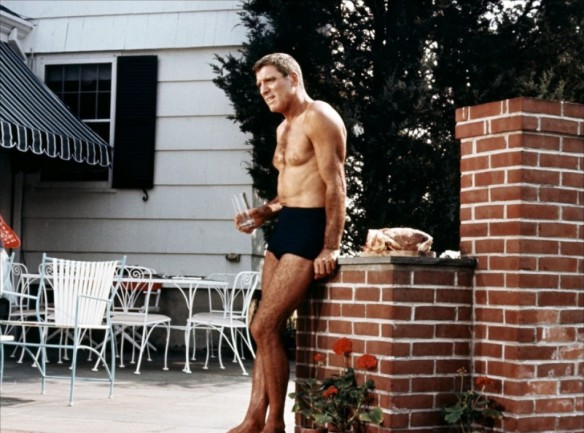 The story of Ned Merrill, a middle-aged man in suburban Connecticut who appears to be suffering a major nervous breakdown, definitely appealed to director Frank Perry, an independent filmmaker who had previously received a Best Director Oscar nomination for the sensitive character study, David and Lisa (1962). But it was not the type of story usually optioned by a Hollywood studio. With his wife Eleanor serving as the screenwriter and Burt Lancaster agreeing to play the title role, Perry was able to convince Columbia Pictures to finance The Swimmer (1968) despite their reservations about the unusual storyline: the Lancaster character finds himself several miles from home and decides to swim his way back, using the backyard pools of numerous acquaintances along the way. With each new encounter, we get another piece of the puzzle, another detail about the identity of the confused protagonist and what might have brought him to his current mental state. 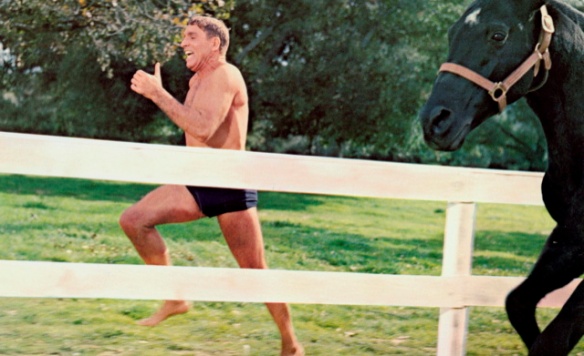 Place your bets. Burt Lancaster vs. a horse (from THE SWIMMER, 1968)

What could have become a boring, pretentious art film succeeds brilliantly as a semi-absurdist but deeply felt portrait of middle-age disillusionment and failure. It’s one of those lucky accidents that occurred in the sixties when Hollywood was still open to experimentation because most studio executives were completely insecure in predicting commercial hits. After all, Bonnie and Clyde and The Graduate (both 1967) had blindsided the industry with their unexpected box-office grosses. So maybe audiences were ready for more challenging films like The Swimmer? Unfortunately, the film was a box-office flop. Still, despite the star power of Burt Lancaster, I’m not even sure the most brilliant marketing team in the world could have lured audiences into theaters to see it. 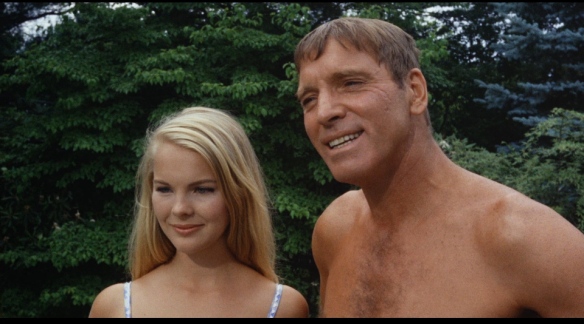 Burt Lancaster and Janet Landgard in The Swimmer (1968)

The Swimmer was something of an ordeal as well for most of the cast and crew, starting with Eleanor Perry, who had to adapt a short story into a feature-length movie. Lancaster, who had a secret fear of the water, took swimming lessons to prepare for the role along with a strict exercise routine since he would be wearing only a bathing suit in most of his scenes. Almost from the beginning, the star and the director clashed and undermined each other to such a degree that after Perry completed the film, Columbia brought in three other directors, including Sydney Pollack, to do additional work on it. One sequence that was shot by Pollack was the scene where Merrill visits his ex-mistress played by Janice Rule. Barbara Loden was supposed to play this role but she never completed her scenes under Perry’s supervision. In the end, less than half of what Perry filmed ended up in the studio cut of The Swimmer. 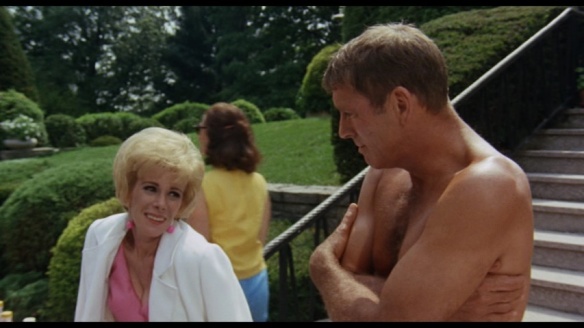 Joan Rivers and Burt Lancaster in The Swimmer (1968)

Still, the final result is a strangely hypnotic viewing experience and is particularly notable for its offbeat casting: Diana Muldaur, Kim Hunter, Marge Champion, Bernie Hamilton, Dolph Sweet, Diana Van der Vlis (X: The Man With the X-Ray Eyes), John Garfield, Jr. (he has a brief cameo as a guy selling tickets at the public pool) and comedienne Joan Rivers in her film debut as a flirtatious woman at a party. In her autobiography, Still Talking, Rivers admitted that working with Lancaster was no picnic: “He redirected every line so that there would be no sympathy for me. Frank (Perry) wanted a happy girl who then got hurt. Lancaster was going to be Mr. Wonderful who came up against a mean bitch, and was right not to go off with her. Trying to please both men, I was going back and forth between line readings, and nothing made sense.” Her brief scene ended up taking seven days to shoot. 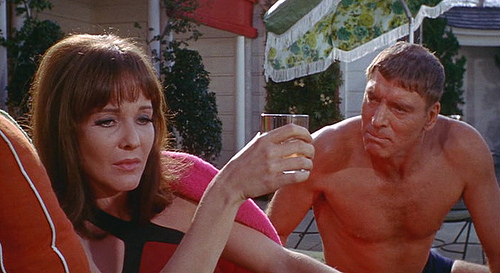 Janice Rule and Burt Lancaster in The Swimmer (1968)

First-time film composer Marvin Hamlisch (he was only 24 years old at the time) had a much happier experience on The Swimmer. Producer Sam Spiegel hired him to write the score after hearing him play the piano at a party and Hamlisch’s haunting theme song for the film opened many doors for him in Hollywood. He would go on to win three Oscars at the 1973 Academy Awards ceremony – one for the score of The Sting (Best Song Score Adaptation) and two for The Way We Were (Best Song and Best Original Dramatic Score). 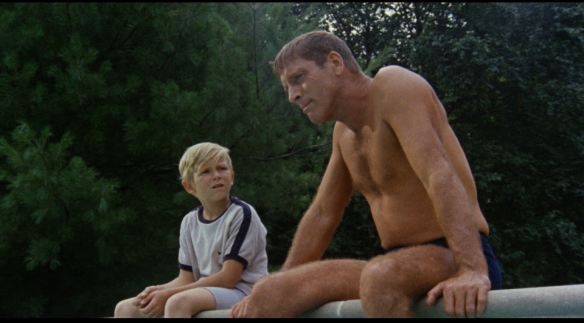 Lancaster later said in an interview in Take 22 that while The Swimmer was one of his favorite roles, “the whole film was a disaster, Columbia was down on it. I personally paid $10,000 out of my own pocket for the last day of shooting. I was furious with Sam Spiegel because he was over at Cannes playing gin with Anatole Litvak while he was doing The Night of the Generals. Sam had promised me, personally promised me to be there every single weekend to go over the film, because we had certain basic problems – the casting and so forth. He never showed up one time. I could have killed him, I was so angry with him. And finally Columbia pulled the plug on us. But we needed another day of shooting – so I paid for it.” 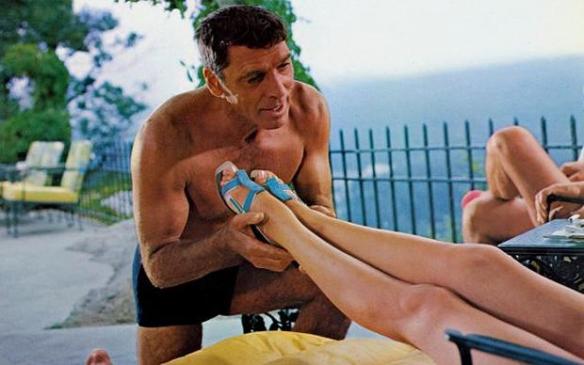 Most critics were oblivious to the behind-the-scenes squabbles and praised the film for its unique qualities. Variety reported that “a lot of people are not going to understand this film; many will loathe it; others will be moved deeply. Its detractors will be most vocal; its supporters will not have high-powered counter-arguments.” Vincent Canby in the New York Times probably articulated the most common assessment of The Swimmer when he wrote: “Although literal in style, the film has the shape of an open-ended hallucination. It is a grim, disturbing and sometimes funny view of a very small, very special segment of upper-middle-class American life. As a box-office proposition it obviously is an uncertain quantity and one that few of the major producers might have undertaken without the insurance of Lancaster’s name…As do few movies, The Swimmer stays in the memory like an echo that never disappears.”

* This is a revised and extended version of an article that originally appeared on tcm.com

** If you are a fan of The Swimmer and don’t own the recent Blu-Ray release from Grindhouse Releasing, you should know that the extras include a two and a half hour documentary on the making of The Swimmer, which is one of the best behind-the-scenes look at a film production I’ve ever seen. You also get to hear John Cheever read the short story that inspired the movie. 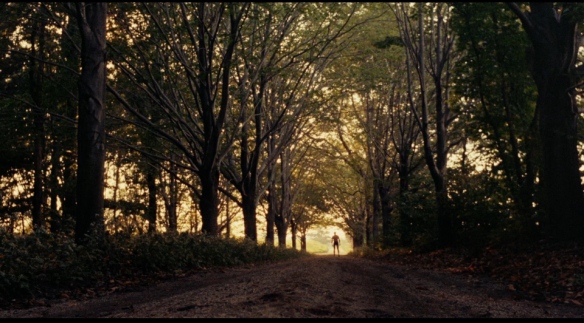 Burt Lancaster (in the distance) in The Swimmer 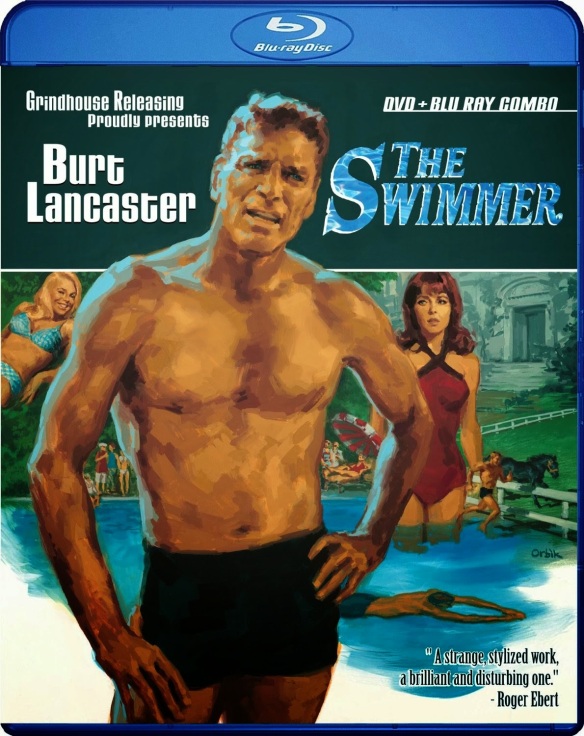