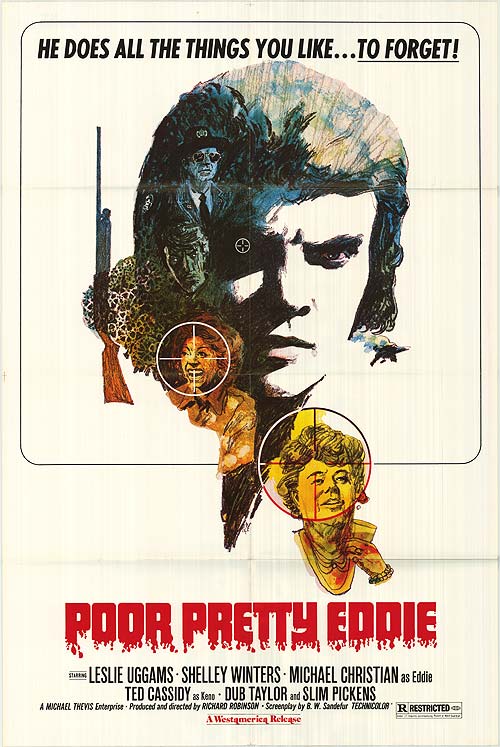 Sometimes a movie goes so horribly wrong in so many ways that it ends up working on an entirely different level in spite of itself. Such is the case with Poor Pretty Eddie (1975), which is also known as Black Vengeance, Heartbreak Motel and Redneck County Rape, clear indications that this is a movie with a confusing production and distribution history. A sleazy exploitation thriller with artistic pretensions, the film manages to be offensive, crude and inept in equal measure while still succeeding as a compulsive viewing experience for connoisseurs of fringe cinema who think they’ve seen everything.

Michael Christian in the title role

It was filmed outside Athens, Georgia at Charlie Williams’ Pinecrest Lodge, a home style Bar-B-Que restaurant, and was executive produced by Michael Thevis, a notorious mobster who was once on the FBI’s Ten Most Wanted List and known as “The Scarface of Porn” (he is currently serving time in prison in Sandstone, Minnesota for the shotgun murders of two men, Isaac Galanti and Roger Dean Underhill). Thevis had provided financing for other movies (often uncredited) such as Oliver Stone’s Seizure [1974] but the mystery is how well-known and established actors such as Shelley Winters, Leslie Uggams, Slim Pickens and Dub Taylor were lured into this dubious project which capitalizes on the worst stereotypes of the rural South. Drawing inspiration from the Yankee-hating Two Thousand Maniacs! [1964] and the hillbilly nightmare Deliverance (1972), Poor Pretty Eddie also exploits women’s fears about traveling alone and the consequences but ups the ante by putting a woman of color in the driver’s seat. It certainly was the precursor to the Roger Corman/New World Pictures drive-in hit, Jackson County Jail (1976) with its quasi-feminist slant, but it was eclipsed by the male variation, Macon County Line (1974), released by American International Pictures. 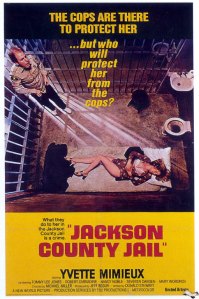 My own interest in the film comes from the fact that it was filmed in Athens not long after I arrived in January 1973 to attend the University of Georgia. I remember hearing reports of Shelley Winters sightings in downtown Athens and rumors about the nightlife shenanigans of some of the cast and crew. At the time, my friend Christy Gray was a waitress at the Prime Time Restaurant (now a liquor store), one of the few semi-high end local restaurants for carnivores. I remember her telling me about a night when a large party of people involved in the production of Poor Pretty Eddie (including Shelley Winters and Michael Thevis) came into the restaurant and shut the place down. Toward the end of their partying, a drunken Thevis blurted out something like “If anyone wants to drink, gamble, fight or fuck, come to room 46 later tonight.” 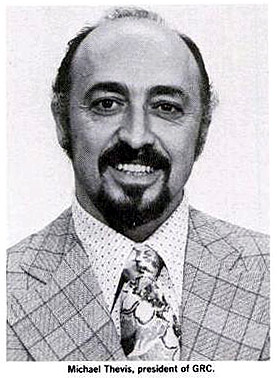 The production on Poor Pretty Eddie was completed in November of 1973 but the movie did not have an official premiere until the Atlanta International Film Festival in 1974. To say it was poorly received there would be an understatement and an edited version of Poor Pretty Eddie finally received its hometown premiere in May 1975. I didn’t catch up with the film until 2009 but had always wanted to see it because several prominent residents of Athens and acquaintances of mine had played a part in the production.

The film stills you see near the beginning of the film were shot by Jim May, brother of my friend Marianne May Causey. The American Legion Hall in nearby Lexington, Ga. was used for scenes and local sheriffs Gene Smith (of Oglethorpe county) and Tommy Huff (of Clarke County) make cameo appearances. So does University of Georgia basketball coach Harbin “Red” Larson, who appears in one of the film’s most sordid scenes. Larson (he died in 1981) plays a sleazy traveling salesman who offers Uggams a ride (and potential escape) from her situation but ends up making her pay in oral sex and more in his parked car. You can only wonder why Larson agreed to do this movie or what he thought when he finally saw it (or what the president of UGA and the faculty thought).

There were even a few prestigious crew members from outside Georgia who somehow got roped into working on Poor Pretty Eddie such as former actor (Rebel Without a Cause) turned editor Frank Mazzola and musician Grant Boatwright and his wife, singer Ginger Boatwright, who contributed to the soundtrack, and appear in the film.

Poor Pretty Eddie starts innocuously enough at a football stadium where famous singer Liz Wetherly (Leslie Uggams) is belting out the national anthem before the game (It was supposed to be Sanford Stadium at UGA but ended up being shot at the home of the Falcons – Atlanta Stadium). The movie then quickly transitions to a shot of her car speeding through the countryside and her voiceover: “Look, I have two weeks before my next concert. Now I’m going to get in my car and drive until I find a nice, quiet hole to crawl into.” Truer words were never spoken. Liz finds the perfect hideaway when her car breaks down on some backwoods country road.

Stumbling upon a rundown hunting lodge with cabins for rent, Liz decides to rent a room while the property’s handyman Keno (Ted Cassidy, Lurch of TV’s The Addams Family) fixes her car. What should have taken only a few hours turns into days as Liz becomes a virtual prisoner in this bucolic hellhole due to the manipulations of the innkeeper Bertha (Shelley Winters) and her younger lover Eddie (Michael Christian). He not only becomes sexually obsessed with Liz but also thinks she can help his fledgling career as a country singer (his wardrobe suggests Elvis in his Vegas years with a touch of Evel Knievel).

Liz’s attempts to repel Eddie end in rape and the degradation just continues after that – the aforementioned sexual assault from a traveling salesman, a humiliating investigation by the local sheriff Orville (Slim Pickens) who asks her questions like “Did he bite ya on the tittie?,” a meal of Keno’s beloved dog, a public trial in which Floyd (Dub Taylor), the self appointed judge, strips Liz in front of the local yokels, and a final nightmarish wedding ceremony that turns into a bloodbath.

Director Chris Robinson was already an old pro at the exploitation game when he made Poor Pretty Eddie. His directorial debut was a 1970 “documentary” entitled The ABC’s of Marriage and some of his subsequent efforts were Bloody Trail (1972), a post-Civil War exploitation drama with Rance Howard (father of Clint and Ron Howard) and John Mitchum (younger brother of Robert Mitchum), the low budget Western To Hell You Preach (1972) and Is There Sex After Marriage (1973). Whether Robinson was trying to craft a commercial thriller geared for the drive-in market or trying to make a gripping melodrama that addressed racial relations, rape and self-preservation is hard to say but part of the answer may lie in the screenplay by B.W. Sandefur, which, according to some sources, was inspired by the Jean Genet play The Balcony. Strangely enough, in the 1963 film version of the Genet play, Shelley Winters played the madam of a bordello who encouraged her customers to play out their sexual fantasies while a revolution was unfolding in the streets outside. Winters is also a madam of sorts in Poor Pretty Eddie, a former showgirl who now rules over her remote domain in an alcoholic haze, dreaming of the past. Bertha’s rustic lodge, however, is no upscale bordello and is closer to a free-range insane asylum, comparable to John Waters’ conception of Mortville in his 1977 feature Desperate Living, but played as pure melodrama here. 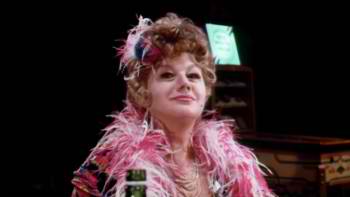 Artistic pretentions aside, Poor Pretty Eddie works best as a defiant, in-your-face grindhouse flick that moves from one atrocity to the next and part of its hypnotic attraction is the sight of an actress like Shelley Winters (who was never one to refuse grotesque roles for vanity reasons) spout dialogue like “What is that there juicy pickaninny doing up there in my cabin?” She gets her share of howlers here (delivered in a pseudo-Southern accent) and plays her passive/aggressive role as an exaggerated hybrid of her earlier work in Bloody Mama [1970] with some pouty, dejected mannerisms from A Place in the Sun [1952]. Matching her scene for scene in terms of excess is Michael Christian as Eddie, who delivers most of his dialogue with a wink and a sick puppy smile, bringing new meaning to the word repulsive as he performs riffs on his psychotic half-wit character.

Slim Pickens and Dub Taylor also appear to relish their over-the-top caricatures of Southern degenerates and in one party sequence reveal their regional sense of humor:
Floyd (Taylor): “I ain’t got nuthin’ against n*ggers. It’s them goddamn Yankees. They’re like hemorrhoids.
Orville (Pickens): “How’s that?”
Floyd: “Well, if they come down and go back, that’s alright. But if they stay down, they’re a pain in the ass.”
Orville: “Ya know, the way things is going one of these days the only kinda people we’ll have around here is high yellow.”
Orville: “You asshole.” (They both laugh uproariously).

While the shrill performances, stunningly crass dialogue and the offensive central narrative of a black woman being victimized by moronic white rednecks are enough to guarantee Poor Pretty Eddie a special place in The Cinema Hall of Shame, it earns extra points for its mind-warping montage sequences which enter avant-garde territory. The most infamous scene in the movie, of course, is the slow-motion rape of Liz by Eddie in the cabin and it is intercut with footage of two dogs mating while a jaunty little country ditty plays on the soundtrack. In another sequence, Eddie, dressed like an Elvis impersonator, takes Liz to a waterfall for a photo session and as she snaps images of him striking rock star poses, she imagines her camera as a shotgun, blowing huge holes through his white body suit. The final wedding scene massacre, also shot in slow motion and an obvious nod to the cinema of Sam Peckinpah, is a gratuitous gore freakout staged for maximum incoherence.

In some ways, you could say Poor Pretty Eddie is a less cathartic precursor to Fight for Your Life [1977), a sadistic actioner in which a trio of escaped convicts terrorize a black family until their victims finally turn the tables with extreme viciousness. There is no final catharsis for Liz. At the beginning of the movie she is a strong, independent, self-reliant woman and famous celebrity. By the end she is stripped of everything – her freedom, self-respect and maybe her sanity.

Uggams, a musical star of Broadway, television and the movies, has the most difficult role in Poor Pretty Eddie and her actions and reactions to her situation often demand a major suspension of disbelief. Yet, she brings a much-needed sense of quiet defiance and seething inner rage to her character that finally explodes in the final moments but is strangely self-directed as she destroys a mirror image of herself with a shotgun. 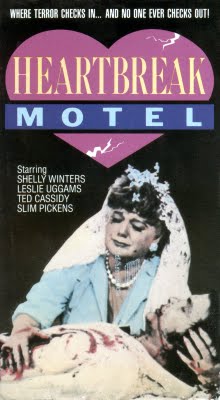 Poor Pretty Eddie had a limited theatrical release but surfaced in various versions with different titles over the years in film prints and VHS copies. The print quality usually showed considerable wear and tear and faded color but it resurfaced on Blu-Ray in 2011 from Cultra (Who would have thought this would ever happen?) looking as good as it ever possibly could, if not better, than when it first made the rounds under the title Poor Pretty Eddie. The film still stands out as one of the purest examples of what exploitation cinema is all about and worth seeing for its unapologetic assault on good taste.

* This is an expanded and revised version of an article that originally appeared on the Turner Classic Movies website.

http://templeofschlock.blogspot.com/2011/09/truth-about-eddie-remembering-poor.html (a highly recommended article on the making of Poor Pretty Eddie)

http://www.atlantatimemachine.com/misc/eddie11.htm (another essential site for information on the film’s production history) 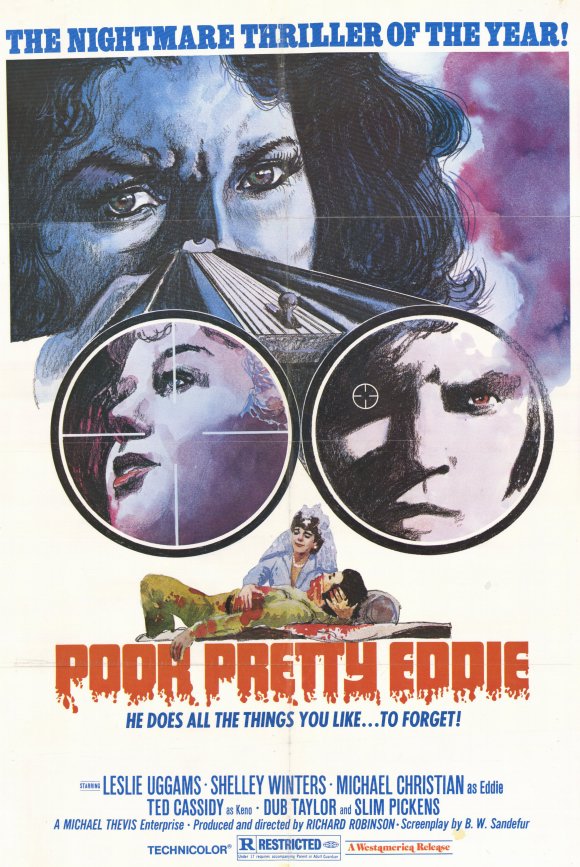