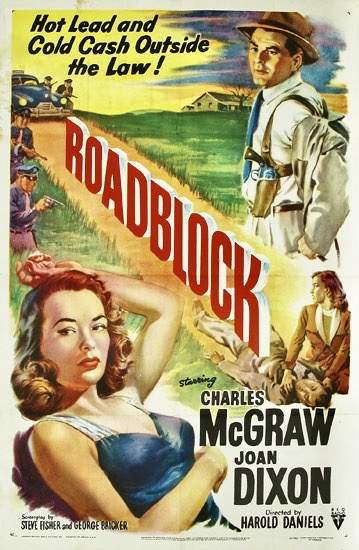 What could make a reputable insurance instigator go bad? A beautiful woman? Lots of loot? A sense of empowerment? For Joe Peters (Charles McGraw), it’s all of these things but it’s definitely a femme fatale named Diane (Joan Dixon) who first ignites the copper’s lust and then his greed. Roadblock (1951) is a cleverly plotted, terse little film noir that has more twists and hairpin turns than a winding mountain road. What makes it stand out from other low-budget noirs produced at RKO is Charles McGraw’s compelling performance as an easily seduced sucker unlike his usual tough guy roles and Joan Dixon’s sultry presence. 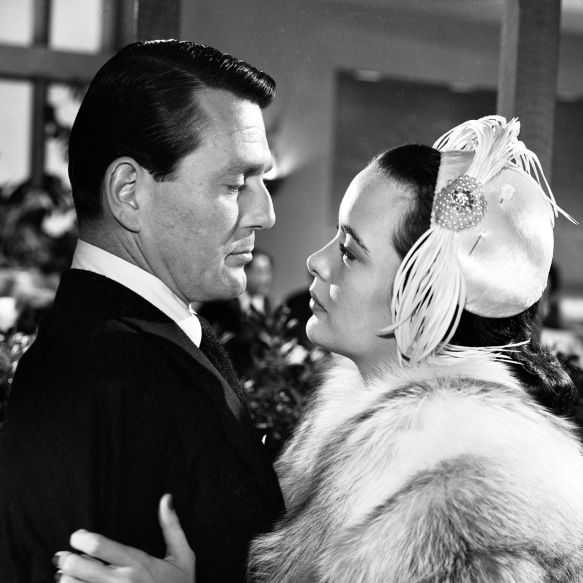 Like a moth to a flame, insurance investigator Joe Peters (Charles McGraw) is drawn to the deceptive Diane (Joan Dixon) in the low-budget film noir Roadblock (1951), released by RKO.

First, Joe and Diane “meet cute” in an airport and wind up sharing a hotel room in Kansas after their plane is forced to make an emergency landing. Diane makes it perfectly clear from the get-go that Joe is not in her league. She’s looking for a wealthy provider to shower her with diamonds and furs, not some working class stiff who wants a housewife. “Once a girl gets the feeling of mink around her shoulders, she doesn’t forget it, even if she’s in love and tries awfully hard,” Diane murmurs seductively to Joe.

Before you know it, the once honest investigator is cutting himself in on a lucrative deal with Diane’s current paramour, a well-connected racketeer. Their plot – an elaborate railway mail car robbery – proceeds smoothly until the final moments of the heist when a policeman is shot and killed. After that, fate deals Joe a different set of cards – all jokers.

From the opening title sequence, you know Roadblock is no run-of-the-mill B-movie; the credits roll down the screen at a slanted angle over the high beams of a car, traveling at night on a deserted road. Director Robert Aldrich possibly saw this and imitated it in the opening credits to Kiss Me Deadly (1955).

The climactic chase scene in the dry storm drains of Los Angeles (a location which would take on even more iconic associations with Them! in 1954), is also an inspired location choice compared to most studio-bound crime films at RKO.

The first half of Roadblock is particularly memorable with Joe and Diane engaging in a form of verbal ping-pong which manages to be both existential and cynically amusing at the same time:

Diane – “What makes anybody the way they are?”

Diane – “Where they got started maybe. I had a lot of jobs – modeling, clerking, secretarial work. I tried hard but it was no go.”

Joe – “Does that make a chiseler out of you? Must have been something else.”

Diane – “Whenever I got a job there was always a man who wasn’t interested in my working ability.”

Diane – “Really? Coming from you that’s a compliment.” 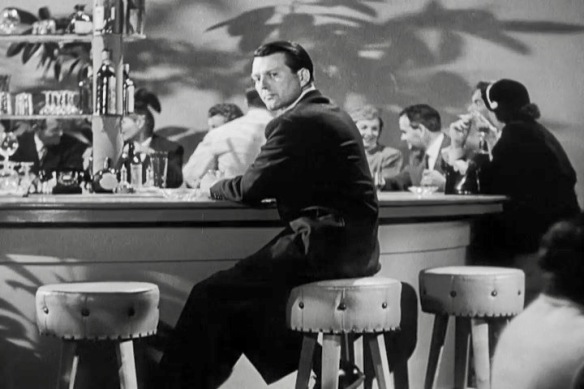 In addition to the hard-boiled dialogue, Joe’s introduction in Roadblock is also cleverly staged and to reveal it here would spoil the fun. The only drawbacks with the film are Diane’s rather improbable character arc and a detectable note of misogyny, which was not unusual in noir dramas written and directed by men in this era.

Charles McGraw is perfectly convincing as the corruptible hero but it is quite a different role from the many menacing criminals (Border Incident) and tough cops (The Narrow Margin) he has played throughout his movie career. He is usually brash, self-confident and in control but in Roadblock McGraw has an obvious Achilles’ heel and that weakness renders him completely ineffective in the end.

A publicity shot of actress Joan Dixon during her RKO days.

Joan Dixon is practically unknown today but she was a knockout beauty in her day and it’s a pity she didn’t make more films. She got a big build-up by Howard Hughes when she was a contract player at RKO but only made a handful of low-budget movies. Western fans will recognize her as Tim Holt’s love interest in a quartet of frontier shoot-em-ups: Law of the Badlands, Gunplay, Pistol Harvest and Desert Passage.

In the late fifties Dixon became a familiar name in gossip columns for her active social life and two short-lived marriages which both ended in divorce court. She eventually returned to the nightclub circuit as a singer, which is how Hughes discovered her in the first place. She was talented enough to attract the attention of New York columnist Walter Winchell, who plugged her act often, once writing in 1960, “New Yorkers are in for a treat to the eyes and ears when Joan Dixon (another WW orchid-wearer) debuts at Bon Soir.” At this point, Dixon had already retired from acting but Roadblock remains an impressive showcase for her. 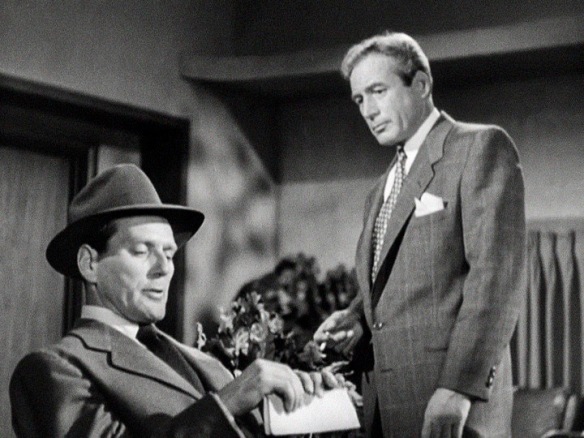 Neither Joe Peters (Charles McCraw, left) or Kendall Webb (Lowell Gilmore) can be trusted to honor their crime partnership in Roadblock (1951).

Among the other cast standouts in Roadblock is Lowell Gilmore, who oozes reptilian charm as the elegant but totally devious Kendall Webb, someone who shares many similarities with George Macready’s character in Gilda (1946). Louis Jean Heydt is also memorable in his role as Harry, Joe’s investigator pal, who senses almost immediately that all is not quite right with his weekend hunting partner.

Joe’s partner, Harry Miller (Louis Jean Heydt, left) and his associate Ray Evans (Milburn Stone) realize their fellow investigator is up to no good in Roadblock (1951).

Harold Daniels, the director of Roadblock, worked as both an actor and director but his filmography on both counts is undistinguished except for the notoriety of his 1957 drive-in classic Bayou. It enjoyed a second life under the title Poor White Trash with an added musical prologue and some tame nude scenes. The salacious ad campaign turned it into a regional hit, especially in the South, and it played for years on the drive-in circuit. Daniels also directed the 1953 sci-fi adventure Port Sinister and two genre efforts with actor Gerald Mohr – My World Dies Screaming aka Terror in the Haunted House (1958), which was filmed in “Psycho-rama!”, and the crime drama Date with Death (1959). 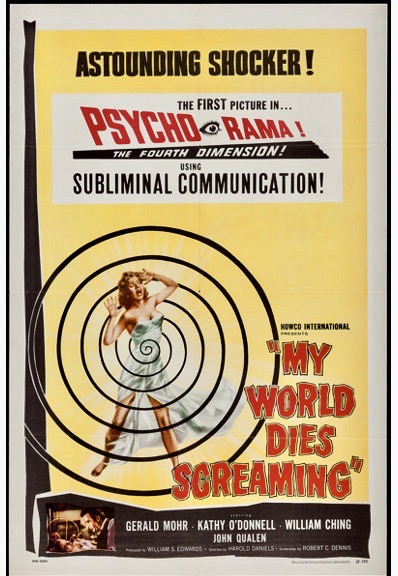 One last fact about Roadblock: It features the moody, noir cinematography of Nicholas Musuraca (Out of the Past [1947], The Woman on Pier 13 [1949]). While not as noteworthy as those latter efforts, it still gives the film an added touch of class.

Roadblock was released on DVD with no extras from Warner Archive Collection as part of their Film Noir collection in Feb. 2014. Maybe someday it will get a Blu-ray upgrade. It would also be great to see a Charles McGraw blu-ray collection someday curated by Alan K. Rode, who wrote the definitive biography of the actor, Charles McGraw: Biography of a Film Noir Tough Guy. 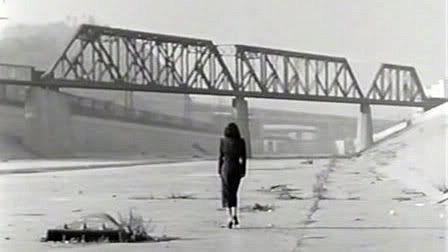 The final scene in Roadblock (1951) takes place in the Los Angeles storm drains.