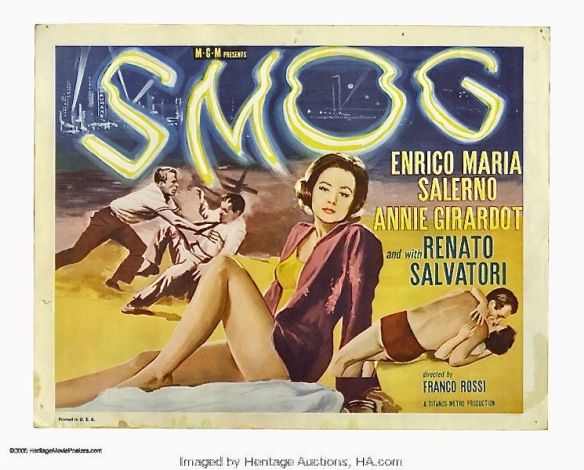 Have you ever felt like you didn’t fit in or were completely out of sync with everyone in your immediate world? That is the existential dilemma that drives the narrative of Smog, a 1962 film from little known Italian director Franco Rossi that depicts a European traveler’s first impressions of Los Angeles.  The man in question is Vittorio Ciocchetti (Enrico Maria Salerno), a lawyer from Rome who arrives at LAX airport en route to Mexico on business, and the title of the film, of course, refers to the toxic mixture of fog and car exhaust that has characterized Los Angeles weather since the 1940s when cars began to clog the streets and freeways of the city. 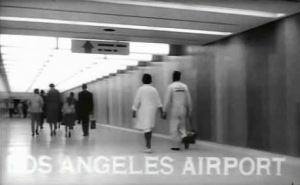 The LAX airport is featured in the opening moments of Smog (1962), directed by Franco Rossi.

Vittorio is informed his Visa clearance may take several hours so he decides to do some sightseeing during the brief layover which becomes an extended stay. Almost immediately he feels disoriented and unable to easily maneuver his new surroundings. As he wanders along Hollywood Blvd. he sees few pedestrians and block after block of non-descript businesses, apartments, used car lots and sidewalk newstands. After failing to hail a cab (Welcome to L.A.!), he wanders into an art gallery that is promoting a show by the renowned Italian abstract painter Lelio Marpicati (a fictitious character played by Len Lesser). While there, Vittorio meets Mario (Renato Salvatori), a fellow Italian who has been living in the U.S. for years and is struggling to support himself with a variety of odd jobs. Mario offers to show Vittorio around town and what starts out as a brief sight-seeing tour becomes a long day’s journey into night as Vittorio meets several other Italians living in Los Angeles and becomes swept up in their world. 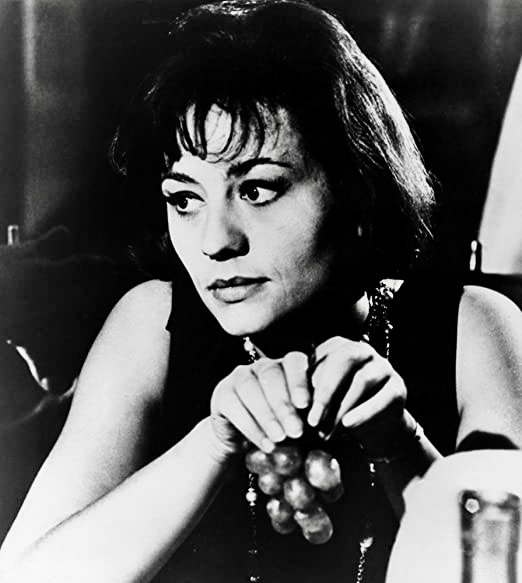 One of his new acquaintances is Gabriella (Annie Girardot), the owner of a company that installs music systems in pools, galleries, offices, wherever. She provides an entrance into the city’s nouveau riche society through her contacts and Vittorio tries to make sense of it all.

Smog is less of a plot-driven film than one that is observational and anecdotal. Rossi is clearly more interested in exploring cultural attitudes, differences and the past vs. the present in a free-flowing narrative that also positions Los Angeles as the epitome of a modern American city where people come to re-invent themselves. 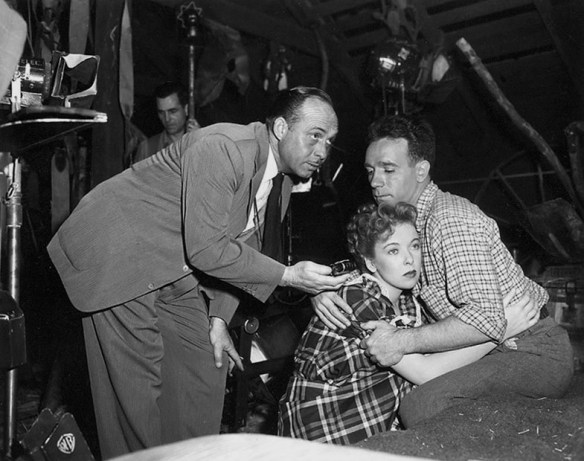 Cinematographer Ted McCord (left) on the set of Deep Valley (1947) with Ida Lupino and Dane Clark.

Generally considered one of the first films shot entirely on location in the city by a European film director and crew with the exception of the cinematographer, Ted McCord (The Treasure of the Sierra Madre, East of Eden), Smog was a collaboration by four Italian screenwriters (Franco Brusati, Pasquale Festa Campanile, Massimo Franciosa, Ugo Guerra) based on ideas by Franco Rossi, Pier Maria Pasinetti and Gian Domenico Giagni. Director Rossi had spent months exploring the city during the pre-production phase and his eye for capturing iconic details are evident in every frame with vivid snapshots of Beverly Hills, Culver City, Hollywood Hills, Pasadena and other key locations. 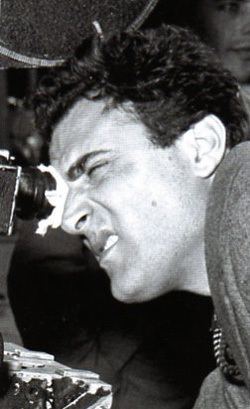 When Smog was released in Italy, some critics compared it unfavorably to the work of Michelangelo Antonioni. You can certainly see some similarities in terms of juxtaposing people against sterile, inhospitable landscapes of their own making or focusing on the superficiality and pretentiousness of the bourgeoisie at play. But Rossi takes a much more spontaneous, cinema-verité like approach to his subject which is often lightly satiric and occasionally melancholy. He never achieved the international fame of someone like Pier Paolo Pasolini but his 1960 feature, Morte di un amico (Death of a Friend), based on a story by Pasolini, is now considered a gay cult film in Italy and other career highlights include the Alberto Sordi comedy, Il Seduttore (1954), and Amici per la pelle (The Woman in the Painting, 1955). 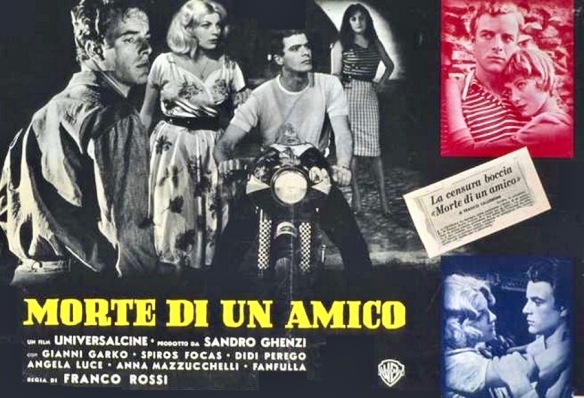 The performances in Smog are first rate and Enrico Maria Salerno is perfectly cast as Vittorio. Salerno is probably best known to film buffs for playing inspectors, commissioners and other bureaucratic officials in Italian genre films like The Bird With the Crystal Plumage (1970), Execution Squad (1972) and The Left Hand of the Law (1975). As the main protagonist in Smog, Salerno creates a subtle but unsympathetic portrayal of an elitist and social climber. You get a telling detail about his character in an opening scene where Vittorio offers assistance at the airport to some fellow travelers from Italy but when he is asked about them by an airline official, he dismisses them as “just immigrants.” 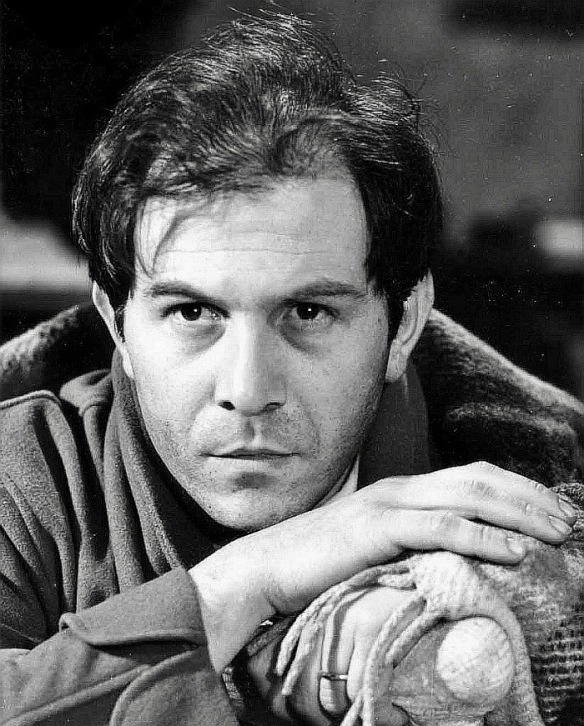 Enrico Maria Salerno plays Vittorio, an Italian lawyer who is baffled by the lifestyle in Los Angeles in Smog (1962), directed by Franco Rossi.

Much more intriguing than Salerno’s stuffy Vittorio are Renato Salvatore and Annie Girardot as transplanted Italians living in the city. Salvatore’s Mario is both amusing and pathetic as a constantly scheming hustler who sees Los Angeles as a paradise – if only you can own a piece of it. Girardot’s Gabriella is more of an enigma, alternating between a sensuous, carefree jet-setter and someone who is almost nostalgic about the sort of traditional life she could have had back in Italy. There are also some curious cameos such as American character actor Max Showalter aka Casey Adams as a party guest who mistakes Vittorio as the Italian Ambassador. 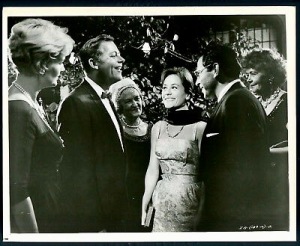 American character actor Max Showalter aka Casey Adams (on left) at an upscale party for the Los Angeles elite in Franco Rossi’s Smog (1962). Annie Girardot and Enrico Maria Salerno (on right) co-star in the drama.

Interestingly enough, Salvatore and Girardot, who play casual lovers in Smog, were a couple in real life. They met on the set of Luchino Visconti’s Rocco and His Brothers in 1960 and they married in 1962. The couple had a child together and later separated but never got officially divorced. 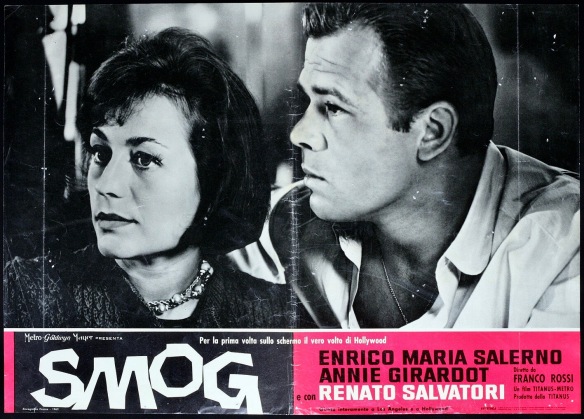 For Angelenos and fans of L.A.-based films, the main attraction of Smog is the film’s wonderful documentation of the city streets, neighborhoods and buildings circa 1962. First you have the Los Angeles International Airport sporting its new LAX terminal (built in 1961) which looks like something out of Jean-Luc Godard’s Alphaville and is practically deserted in terms of the passenger traffic it has today. You also get a glimpse of the famous Encounter restaurant exterior which is now the center for the Bob Hope USO non-profit organization. 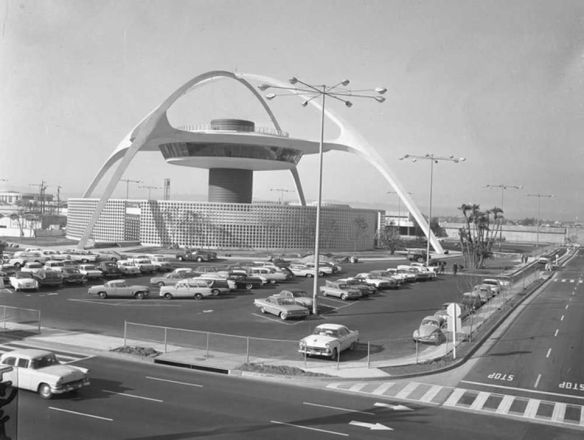 The famous space age design for the Encounter restaurant at the LAX airport in the early sixties.

Other memorable locations that provide background for Vittorio’s wanderings include Hollywood Legion Lanes (a former fight and wrestling palace converted to a bowling alley in 1960); Hollywood Memorial Cemetery (now renamed Hollywood Forever Cemetery); the Stahl House aka Case Study House #22 in the Hollywood Hills designed by Pierre Koenig (it serves as Gabriella’s temporary residence in Smog).

The famous Stahl House in the Hollywood Hills of Los Angeles is prominently featured in Franco Rossi’s drama Smog (1962).

There are also glimpses of Ted’s Grill in Santa Monica (closed in 1972); Max Berman & Sons legendary costume rental agency; the dusty, arid oil fields of Culver City; the odd detail like a Schlitz beer billboard or a sign for Compari’s Pizza (established in 1960) and, last but not least, Bernard Judge’s Triponent House in the Hollywood Hills (a variation on R. Buckminster Fuller’s geodesic dome model). 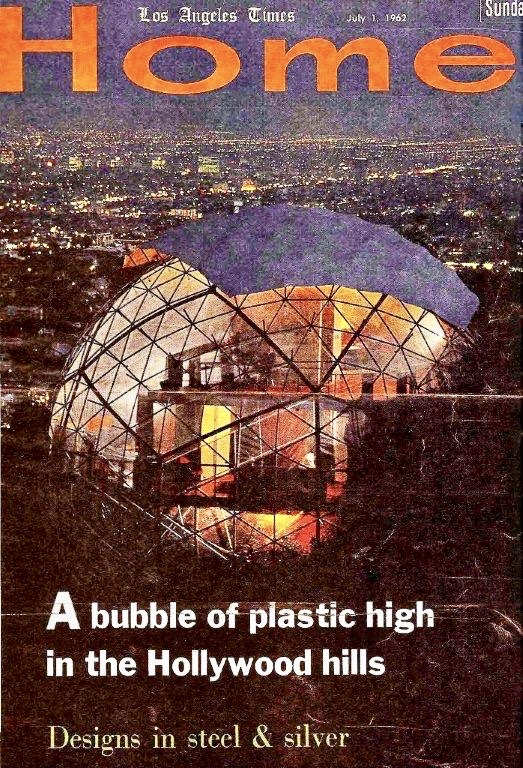 Bernard Judge’s Triponent House in the Hollywood Hills is featured in the absurdist conclusion to Franco Rossi’s Smog (1962).

I’m sure native Angelinos who were born in the fifties or before will spot other now vanished landmarks and buildings. I also wonder if some of the interior locations used were created solely for Smog such as the bowling alley/bar-restaurant where the Italian expatriates hang out and all the waitresses dress like Bavarian beer maidens. I want to go there! 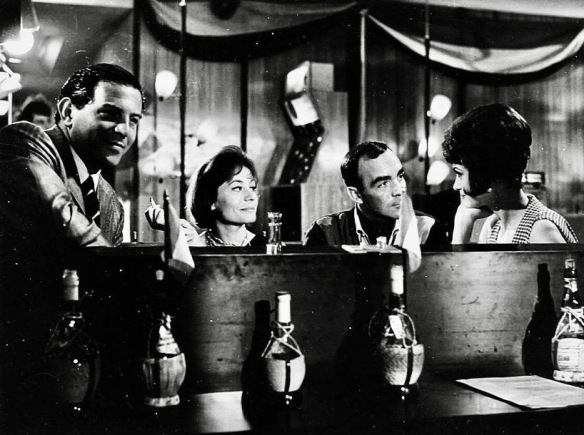 The music score for Smog is by Piero Umiliani (still available on CD) and highly recommended for fans of West Coast jazz since it features trumpet solos by Chet Baker and vocals by singer Helen Merrill. There is also a good deal of incidental music in the film (not on the soundtrack album) which includes a few seconds of the 1961 radio hit, “The Lion Sleeps Tonight” by The Tokens. 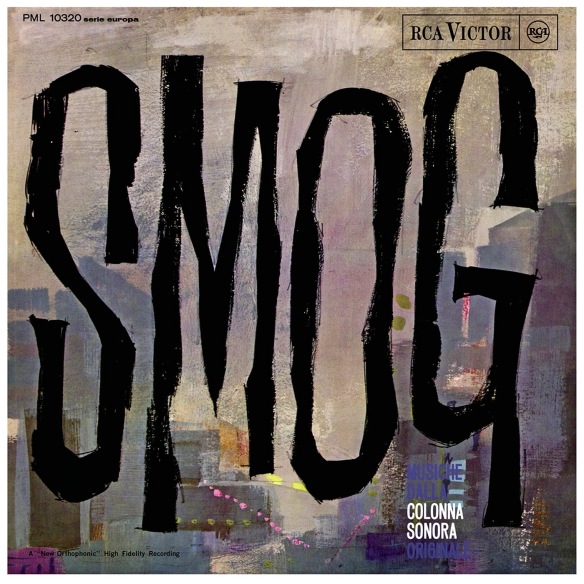 In 2003 documentarian Thom Andersen completed a video essay entitled Los Angeles Plays Itself, which was a remarkable 167-minute critique of the city that was divided into three sections: The City as Background, The City as Character and The City as Subject. Narrated by Encke King in a tone that was both deeply personal and occasionally sarcastic, the documentary used clips from roughly 400 films to make specific points about the city. The usual suspects were included such as Chinatown (1974), Sunset Blvd (1950), Blade Runner (1982) and Rebel Without a Cause (1955) but there were plenty of lesser known movies showcased like Jacques Demy’s Model Shop (1969), Haile Gerima’s Bush Mama (1979), set in Watts, and Kent MacKenzie’s The Exiles (1961), shot in the Bunker Hill neighborhood. All of them are wonderful time capsule documents of the city from their respective years. Of course, even with a 167-minute running time, not every Los Angeles based film could be included like Fast Times at Ridgemont High (1982) or Jackie Brown (1997) but it is too bad that Franco Rossi’s Smog (1962) was overlooked, probably due to its relative obscurity. Yet it is one of the best visual records of Los Angeles from the early sixties. 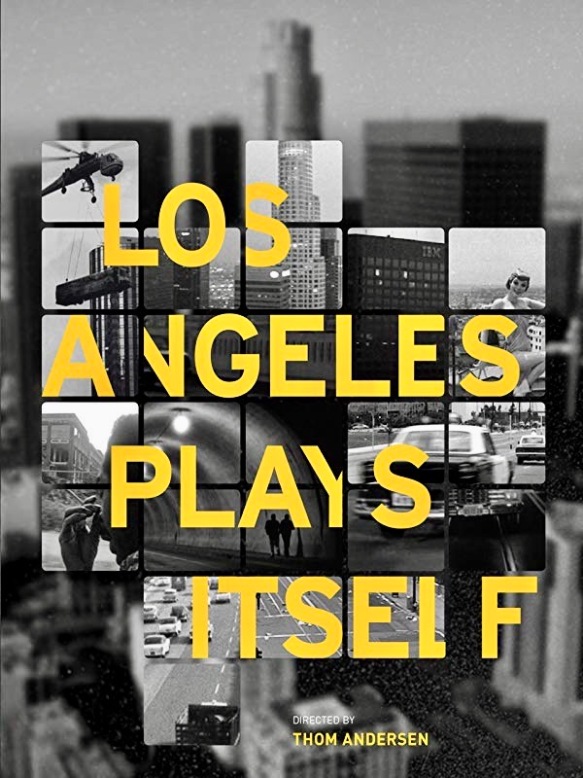 Smog is not currently available on any format in the U.S. and I doubt it will show up in the near future either. An Italian DVD of it was released which you might still be able to find but you would need an all-region DVD player to view it and the disc may not offer an English subtitle option. You can also view a washed-out, sub-par print of it from Italian television on Youtube or purchase a gray market DVD-R of it from outfits like European Trash Cinema. 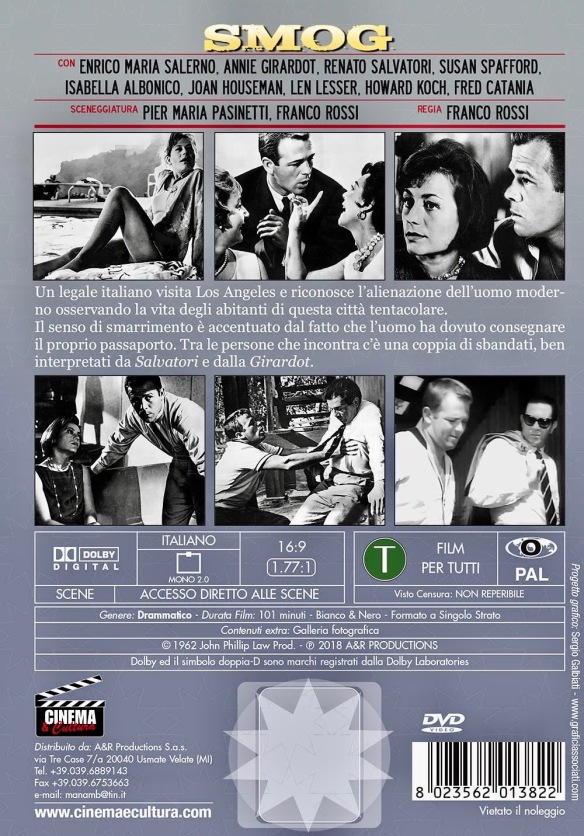