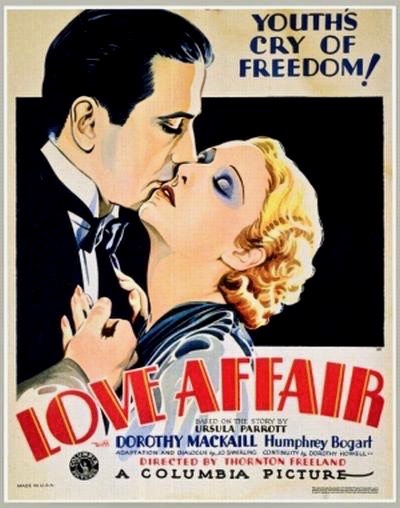 For that small number of gifted actors who become screen legends, the path to stardom is rarely predictable. Sometimes it’s a case of pure luck. Other times it’s achieved after years of honing their craft and screen persona through hard earned experience. I can’t think of a better example of the latter than Humphrey Bogart who made twelve films (two of them short subjects, 1928’s The Dancing Town and 1930’s Broadway’s Like That) before his breakout supporting role as the vicious gangster Duke Mantee in The Petrified Forest (1936). The irony is that despite playing that same character on Broadway where he won unanimous critical acclaim, Warner Bros. wanted Edward G. Robinson for the role. If it hadn’t been for the film’s star, Leslie Howard, who played opposite Bogart on Broadway and demanded that he be cast in the film or he would quit, Bogart might not be as famous today.

Yet he obviously had genuine talent and a unique screen presence which you can see in his early films before casting directors or the studios knew what to do with him. Probably my favorite example of this is Love Affair (1932), which I finally got around to watching after recording it off TCM when Bogart was the star of the month. 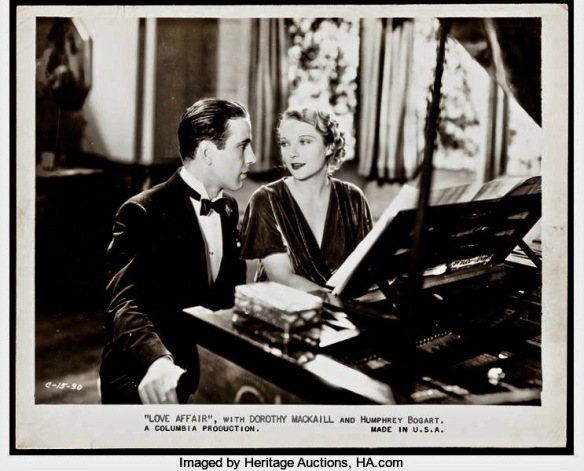 Humphrey Bogart, in one of his first starring roles, opposite Dorothy Mackaill in Love Affair (1932).

In what was his first leading role, Bogart plays Jim Leonard, an aspiring airplane engineer who is pursued by Carol Owen (Dorothy Mackaill), a vivacious socialite with a wild streak. Jim is an earnest, unpretentious working-class hero with a personality that fluctuates between stolid and cheerful. I don’t think I’ve ever seen him smile this much before in a movie – at least in the first half when he’s falling in love – and it’s a smile that’s open and innocent. Not the fixed, cynical grin or self-satisfied leer he would flash in his later films.

Dorothy Mackaill makes a morning house call to see Humphrey Bogart and catches him in his breakfast attire in Love Affair (1932).

Bogart also displays character traits which would be unthinkable in later roles such as a distinct bashfulness. The scene where Jim is sitting at his kitchen table in a sleeveless undershirt and fooling with a model airplane is particularly memorable. Carol drops in on him unexpectedly and he is clearly embarrassed by his appearance and messy apartment and excuses himself to change. When he reemerges from the bathroom, he is dressed in a jacket, shirt and tie – for breakfast. There is also a tenderness in his love scenes with MacKaill (they have great screen chemistry) which reflects none of the confident sexual swagger of his flirtatious spurring with Lauren Bacall on screen. Clearly, it’s a requirement of the part he is playing – the young romantic lead – which was essential for films like Love Affair and others aimed at female audiences of its era.

Most of all, it’s amusing and fascinating to see Bogart this young – with a full head of hair, a higher pitched voice and noticeable makeup that makes him appear a little less cadaverous than his mad scientist in The Return of Dr. X (1939). At the same time, some of Bogart’s iconic persona is already in place – that distinctive way of moving his arms when he walks; his gift for talking fast when he’s agitated, enunciating each word clearly; his ability to convincingly shift from passive to aggressive in a heartbeat and an array of facial expressions (disdain, cockiness, self-amusement, defeat) that look forward to his more effectively realized performances of the ’40s. 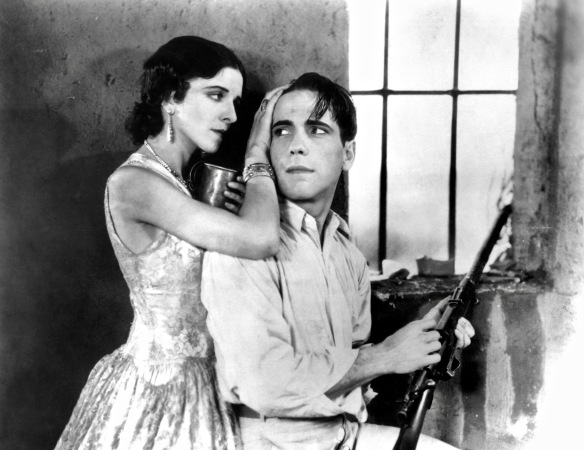 I also tend to forget that his unique way of speaking, marked by an immobile upper lip and a slight lisp, was not a personal affectation but caused by an accident though the details vary from source to source. Ephraim Katz’s The Film Encyclopedia states that he was on board the Navy vessel Leviathan when he was injured by a shell that left him with scars and a partly paralyzed upper lip. Another account claims that “Bogie’s lip was cut when he was escorting a prisoner to Portsmouth Naval Prison in New Hampshire.  He and his man changed trains at South Station in Boston and when the man asked Bogie for a light he hit him in the face with his manacled hands and tried to run away. Seaman Bogart unholstered his Colt .45 and shot the man as he tried to escape.  The doctor who stitched his lip wasn’t very good and that’s why he had the trademark lip/lisping thing.  He didn’t report to the Leviathan until AFTER the end of WW1…the shell splinter story is one of the many non-facts about him that still persist.”

Love Affair was not a Warner Bros. production; it was made for Columbia Pictures during a period when Bogart had returned to Broadway and was about to give up on moviemaking altogether. Someone at Columbia had seen Bogart on the stage opposite Helen Hayes in After All in 1931, however, and the studio offered him a six-month contract which only yielded this one film. While the movie is little more than a formulaic romantic drama on a B-budget, it is still an engaging minor entertainment. 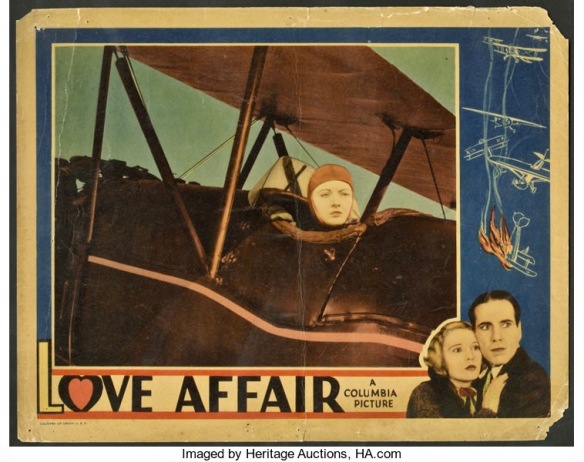 Love Affair begins as if it’s going to be a screwball comedy with Dorothy Mackaill playing Carol as a slightly less daffy socialite than the ones who drive the narratives of My Man Godfrey and Bringing Up Baby. She hires Jim to take her up into the clouds in his two-seater plane and he takes an almost sadistic pleasure in breaking her cool composure, performing daredevil spins and loops (the aviation footage is quite thrilling). In turn, she offers Jim a ride back to the city and proves to be a wild, reckless driver who likes speeding through stop signs at 70 mph.

Just when it seems that Love Affair is creating an early blueprint for Love Me If You Dare, Yann Samuell’s 2003 comedy fantasy in which Marion Cotillard and Guillaume Canet try to outdo each other in outrageous competitions, it transitions into a romantic drama with two storylines. The main one is the popular scenario of the bored, wealthy society girl who is attracted to the penniless but attractive suitor who holds the promise of true love among the rich playboys and sugar daddies in Carol’s life. The second storyline is less compelling but provides a negative flipside version of the Jim-Carol courtship. Jim’s sister, Linda (Astrid Allwyn), is an ambitious actress who has been led astray by crooked theatre producer Georgie Keeler (Bradley Page). He has convinced her to blackmail her lover Bruce Hardy (Hale Hamilton), a wealthy entrepreneur, in order to raise the money needed for a star vehicle produced by Keeler. At the same time, Hardy, who has been pursuing Carol for years, is pressuring her to marry him and the time may be right since she has lost all of her investments in the stock market. 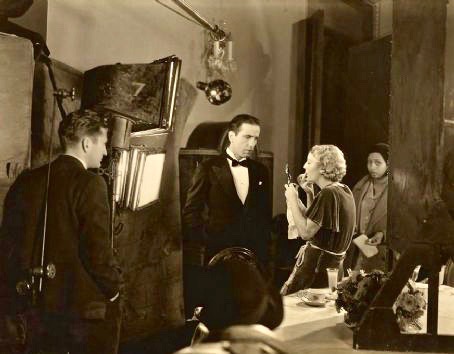 Humphrey Bogart and Dorothy Mackaill on the set of Love Affair (1932), directed by Thornton Freeland.

The movie, directed by Thornton Freeland (Flying Down to Rio, 1933), follows these dual narratives in a predictable, unsurprising manner up to the point where they collide and Hale and Jim clash over both Carol and Linda’s blackmail scheme. Love Affair then throws us a curve ball, culminating in one of the more bizarre and unlikely resolutions for a movie of this type. Carol, realizing that her own selfish, irresponsible behavior has ruined her chances at happiness, goes to the airport and rents a small plane for the day (this is the first time we realize she knows how to fly). Her intention is to kill herself and she leaves a suicide note with Gilligan (Jack Kennedy), Jim’s boss. Jim arrives in time to read Carol’s note and see her racing down the airstrip. What does he do? He runs after her and manages to jump on the tail of the plane as she increases her speed and achieves liftoff. Soaring into the sky, Carol is oblivious as Jim crawls up the back of the plane and eventually manages to squeeze himself into the cocktail with her. It might not be the conventional happily-ever-after finale to this 68-minute programmer but it’s certainly original.

At the time Love Affair was made, the Production Code was not being heavily enforced yet so the film does reflect a looser attitude toward romantic and sexual relationships though it is rather benign compared to more risque fare such as Baby Face (1933) and Safe in Hell (1931); the latter also stars Dorothy MacKaill and is one of the more memorable performances of this often overlooked actress. According to AFI notes on Love Affair “…the Hays Office strongly urged that shots of “Carol Owen” crying in the mirror the morning after she sleeps with “Jim Leonard” be eliminated from the film in order to avoid enforcing the fact that she indeed did sleep with Jim. The scene remained in the film, however. The Hays Office also was against the portrayal of “Georgie Keeler” as a “pimp” who urges “Linda Lee” to have a sexual affair with Hardy so that she can use “Bruce Hardy’s” money to support Keeler’s theatrical career, and insisted that Hardy propose to Linda Lee early in the film, thus making his payment of $10,000 to her at the end of the film part of a “breach of promise” settlement, instead of the efforts of a man to buy off his mistress.”

Dorothy Mackaill and Humphrey Bogart in Love Affair (1932), a combination of light comedy, melodrama and romance.

When Love Affair was released, it was a modest success but no box-office hit and it didn’t help advance Bogart’s career. In fact, his name didn’t even appear in the opening credits for his next movie, Big City Blues (1932), in which his part barely qualified for a cameo role. Bogart would have to wait several years before he got a shot at top billing again – Two Against the World in 1936 – but he wouldn’t become a major star until 1941 with the double whammy of High Sierra and The Maltese Falcon.

A pre-stardom Humphrey Bogart enjoying a day at the pool.

Sony released Love Affair on DVD in June 2013 as part of their Choice Collection but it could be out of print now. The film could certainly use a Blu-Ray upgrade and maybe it will get one someday if any distributor decides to release a package of early Bogart films from the Pre-Code era. It is certainly worth seeking out for any Bogie fan who wants to see a tentative, unpolished version of him. The potential is clearly there and it’s fun to watch a screen legend at an embryonic stage of development.

Dorothy Mackaill has some reservations about her new beau Humphrey Bogart in Love Affair (1932).