A political allegory that was one of the first films to openly address the problems resulting from the Great Depression, Gabriel Over the White House (1933), directed by Gregory La Cava, takes on such pressing issues as unemployment, homeless people and the rising crime rate in a storyline that comes across like a populist turned fascist fantasy. You also won’t see another Hollywood film from the 20th century in which our fearless leader is viewed by his constituents as either a madman or a messiah.

Walter Huston plays a controversial president who has a life-changing experience due to a car crash in Gabriel Over the White House (1933).

Imagine this scenario if you can. The President of the United States is involved in a serious car accident and, while recovering, receives a visit from the Archangel Gabriel. Forced to acknowledge the desperate state of the country due to his poor leadership, the President vows to set the nation right, fires the crooked cabinet members who got him elected and transforms himself into an all-powerful dictator who wages war against organized crime, all in a determined bid to restore social order in America. 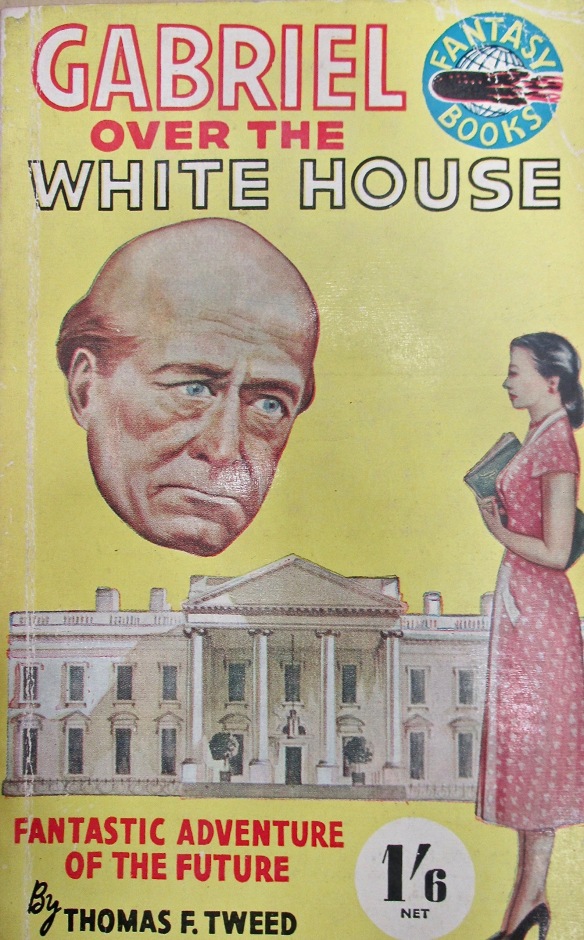 Filmed before Roosevelt took office as President of the United States, Gabriel Over the White House was a collaboration between producer Walter Wanger and publisher William Randolph Hearst’s Cosmopolitan Studios, whose films were distributed by MGM. Hearst’s political views were well known through the editorials he published in his own papers and when he read Rinehard, a novel by British novelist Thomas F. Tweed, Hearst knew he had found the perfect vehicle to express his views on the state of the nation.

President Judson Hammond (played by Walter Huston in the film) is the total autocrat: he storms into the House of Representatives and declares a state of national emergency, convincing the lawmakers to grant him absolute power. Freely adapting Jefferson’s concept of democracy, which was based on “the greatest good for the greatest number,” President Hammond is able to smash through bureaucratic roadblocks, gun down gangsters without a trial, and bully the world into meeting his demands. 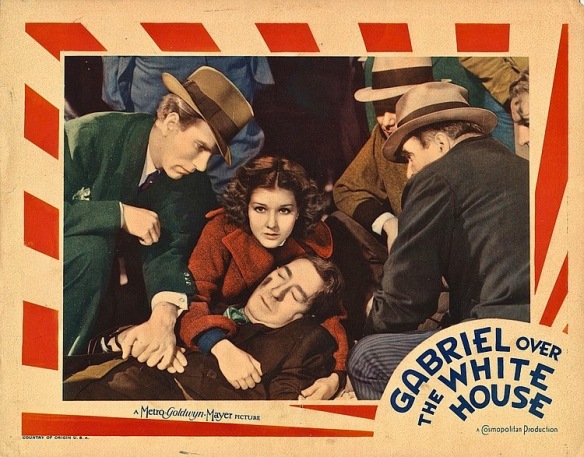 By the end, he has solved the unemployment problem and enforced a worldwide disarmament but dies a martyr for his efforts. It’s easy to see the appeal President Hammond had for an all-powerful newspaper tycoon like Hearst. 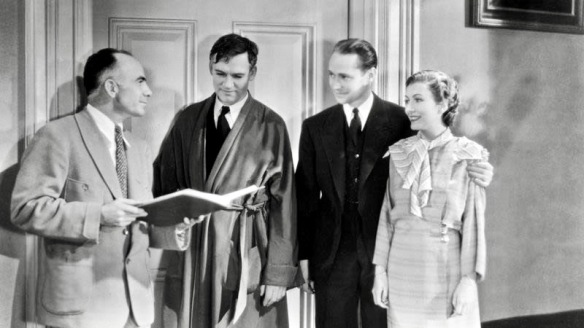 (From left to right) Director Gregory La Cava, Walter Huston, Franchot Tone and Karen Morley on the set of Gabriel Over the White House (1933).

Louis B. Mayer, on the other hand, was a staunch Republican and was appalled by Gabriel Over the White House. “Put that picture in its can. Take it back and lock it up!” was the directive he reportedly gave Eddie Mannix, his top executive, after screening it for the first time. Mayer considered it an attack on President Hoover and demanded extensive retakes on the film before he would release it; the theory being that Hoover would be out of the White House by the time Mayer allowed the film to open theatrically.

Ironically, Gabriel Over the White House turned out to be one of the biggest box office hits of 1933; its topical subject matter obviously spoke to audiences who felt the need for strong leadership after the economic chaos of the Great Depression. It also sparked some lively debates among film critics in its day. The New York Times wrote “It is a curious, somewhat fantastic and often melodramatic story, but nevertheless one which at this time is very interesting.”

President Judson Hammond (Walter Huston, right) is sworn into office in Gabriel Over the White House (1933).

The reviewer for The Nation said “Gabriel Over the White House is probably the most important bad film of the year. It is important because it marks the first attempt by Hollywood producers to exploit the current popular interest in social and economic ideas…Its all-too-evident purpose is to convert innocent American movie audiences to a policy of fascist dictatorship in this country.” He also added that it “has about as much reality as a diagram on a blackboard.”

One thing almost every critic agreed on, however, was Walter Huston’s mesmerizing performance as President Hammond; his metamorphosis from a party stooge who enjoys detective magazines to a messianic leader is completely credible, despite its outlandish conception.

At this point in his career, however, Huston felt that he was wasting his talent on inferior films and that MGM undervalued him since they often lent him out to other studios like RKO. Gabriel Over the White House offered Huston a meaty role for a change and proved to be a turning point for the actor. Within three years, he would be named Best Actor of the year by the New York Film Critics for Dodsworth (1936) and go on to win Oscar nominations for his work in Dodsworth, All That Money Can Buy (1941), and The Treasure of the Sierra Madre (1948).

Yet Huston was always partial to Gabriel Over the White House since it ended up securing him an invitation to the White House for drinks with President Roosevelt, who was a big fan of the film.

Franchot Tone and Karen Morley star in the unusual Pre-Code drama, Gabriel Over the White House (1933).

Karen Morley, who plays “Pendie” Molloy, the President’s confidential secretary, fared differently than Huston in her offscreen politics. She was an up-and-coming actress at MGM where she hit her peak in the earlier thirties appearing in such high profile films as The Sin of Madelon Claudet (1931), Mata Hari (1931) with Greta Garbo, Arsene Lupin (1932) opposite John and Lionel Barrymore, The Mask of Fu Manchu (1932), Scarface (1932) in which she loaned out to United Artists and Dinner at Eight (1933).

Morley met director Charles Vidor in 1932. He introduced her to anti-fascist political causes and she became his wife. Her new political awareness begin to dictate her choice of roles whenever possible such as Our Daily Breed (1934), about the struggles of a farming cooperative, and Black Fury (1935), which focused on gangsters infiltrating the Mine Worker’s Union. By the forties Morley was deemed a radical by many of her co-workers in the Screen Actors Guild and she was later blacklisted as a communist sympathizer in 1951 along with director Joseph Losey (she appeared in his remake of Fritz Lang’s M). She rarely worked as an actress again except for a few TV series appearances in the seventies.

Another intriguing contributor to Gabriel Over the White House was Adrian. As the chief costume designer at MGM, he helped transform actresses like Joan Crawford, Jean Harlow and Norma Shearer into the Dream Factory’s most glamorous icons. Here was a man who was concerned about modernity and whose film fashions were copied by the clothing divisions of department stores across the country, yet it’s interesting to note that many of the films he worked on were costume dramas (Rasputin and the Empress (1932), Anna Karenina, 1935) and lavish musicals (Rose-Marie (1936), Ziegfeld Girl, 1941). An unusual exception was Gabriel Over the White House (1933) which featured a predominantly male cast with the exception of Karen Morley and had a contemporary setting which must have presented Adrian with some challenges in regards to how politicians dress. 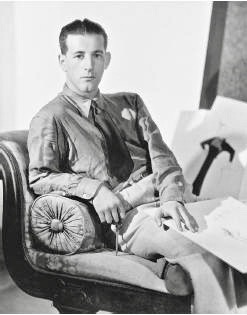 Gabriel Over the White House was released by the Warner Archive Collection as a no-frills DVD-R in January 2010 and is still your only option for viewing the film except for occasional airings on Turner Classic Movies. Although the film was made 86 years ago, it is worthy of a major revival now due to its depiction of a country in crisis mode with a controversial president as its leader. 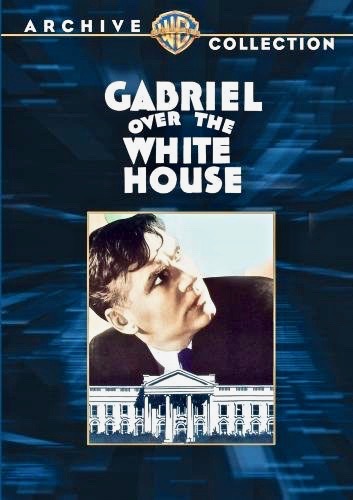 *This is a revised and updated version of an article that originally appeared on the TCM website.

Gabriel Over the White House (1933) Review