Quick, name your favorite film by Robert Downey, Sr., director/father of two-time Oscar nominated actor Robert Downey Jr. Drawing a blank? If film buffs know him at all it is probably due to his 1969 underground cult film Putney Swope or The Eclipse Series 33 box set from The Criterion Collection, released in May 2012 as “Up All Night with Robert Downey Sr.” which included the former film plus Babo 73 (1964), Chafed Elbows (1966), No More Excuses (1968) and Two Tons of Turquoise to Taos Tonight (1975). His most representative films are satiric time capsules of his era and the New York independent film scene but I think Greaser’s Palace (1972) is his funniest and most subversive film in his 41-plus years as a writer/director.

Financed by Mrs. Cyma Rubin, the producer of the Broadway revival of the stage musical No, No, Nanette in 1973, Greaser’s Palace was the first big budget feature for underground filmmaker Robert Downey, Sr. His reputation as an irreverent, anti-establishment provocateur had already preceded him thanks to the release of the surprise art house hit, Putney Swope (1969) and the subsequent film Pound (1970), which was a box office disaster and a bad first experience with a major Hollywood distributor (United Artists). 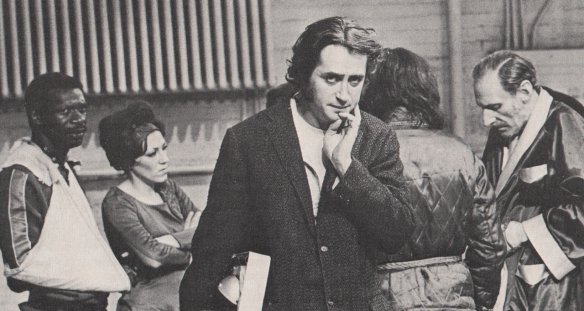 Before that, of course, Downey was one of the critics’ darlings on the New York City experimental film scene in the late sixties with such infamous short films as Babo 73 and Chafed Elbows.

Greaser’s Palace may have been Downey’s most ambitious and costly production to date – it cost a whopping $1,000,000 dollars – but the barely released Pound had already helped kill any momentum his career might have had after Putney Swope and this new picture was not popular with his fans or most critics who had championed his former work. Kevin Thomas of The Los Angeles Times wrote “…the film is so utterly devoid of wit and imagination that the unremitting gross behavior and language it wallows in is quickly revolting,” while Kathleen Carroll of the New York Daily News wondered “Does this weird concoction of Harvard Lampoon parody, half-serious symbolism and silly slapstick really work?”

A scene from Greaser’s Palace (1972), directed by Robert Downey Sr.

And Thomas Meehan of the Saturday Review said “Robert Downey seems to have absolutely everything it takes to be a successful movie director except talent,” and then deemed Greaser’s Palace “even worse than his earlier pictures – an absurdist, incomprehensible Western that mixes in scatology, William Morris agents and the second coming of Christ.” 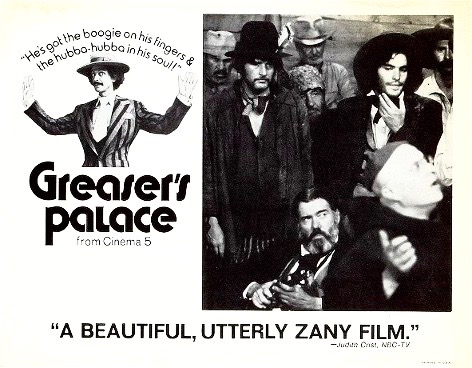 Still, there were some ardent admirers such as critic Jay Cocks of Time magazine who called it “his funniest, most accomplished and most audacious film yet,” adding that it was “the most adventurous American movie so far this year.”

A comic religious allegory set in the old West, Greaser’s Palace follows the adventures of Jessy (Allan Arbus), a Christ-figure in a zoot suit who drops from the sky via a parachute and becomes involved with the residents of a frontier town while passing through on his way to Jerusalem to become an actor-singer. Among the eccentric characters he encounters are Seaweedhead Greaser (Albert Henderson), a greedy land baron with severe constipation, and his children, Cholera (Luana Anders), the star entertainer at the town’s sole saloon, and Lamy (Michael Sullivan), a despised son who is repeatedly killed and revived; the Holy Ghost (someone dressed in a white sheet looking like a KKK member); a topless Indian scout (Toni Basil); a ravenous dwarf (Herve Villechaize) and his transvestite wife; The Man Who Could Crawl and other weirdos. With something to offend everyone, Greaser’s Palace plays like a more lighthearted version of the cult film El Topo (1970) though with less extreme violence but just as much religious blasphemy and taboo smashing.

A scene from Greaser’s Palace (1972), directed by Robert Downey Sr. and starring Allan Arbus as a frontier Christ figure with a song and dance act.

There is some funny business derived from the sibling rivalry between Jessy and the Holy Ghost with the latter complaining to God, a stern-faced bearded man, “You never know what I can do because you never gave me a chance.” Jessy, with his New York accent, fancy wardrobe and vaudeville routines, is also an amusing fish-out-of-water presence whether crossing the great plains or interacting with dirt-encrusted cowboys. He even walks on water in one scene and steals the spotlight from Cholera with his “hubba hubba” musical number that climaxes with stigmata, earning him a standing ovation. Cholera, outraged, complains to her father, “A man with holes in his hands gets greater applause than me and you talk of greatness?” 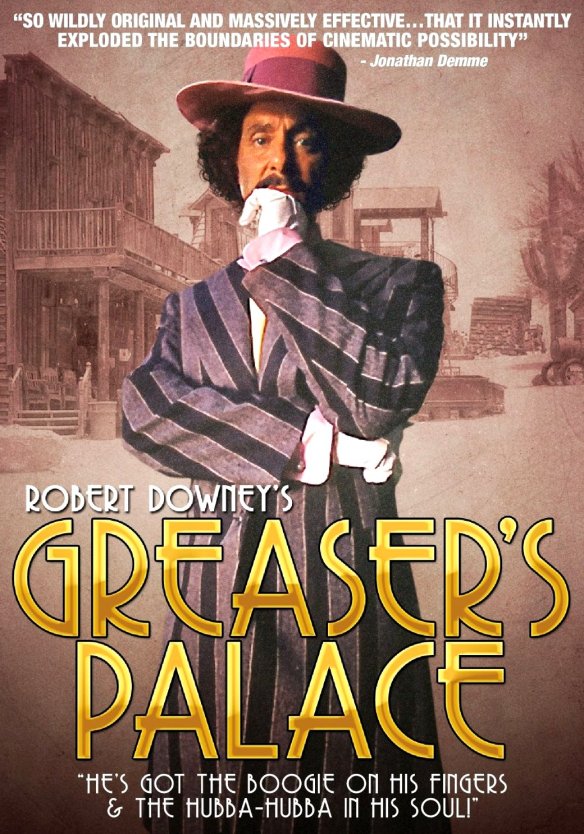 The commercial failure of Greaser’s Palace may have simply been a matter of timing but movies that poke fun at religion have rarely been box office hits. Besides, Downey was never cut out for mainstream cinema, nor did he ever pretend to play the Hollywood game to get his films made at this stage of his career. That would come later with Up the Academy (1980), an unfortunate attempt by Mad Magazine to create their own Animal House-style comedy.

Seen today, Greaser’s Palace is rather unique for its fusion of deadpan sick humor and infantile schoolboy jokes along with theatre-of-the-absurd sight gags and parodies of Western genre films; the visual tone of the film vacillates between a spaghetti western and a pastoral frontier drama and Downey even pokes fun at other movies such as Michelangelo Antonioni’s Zabriskie Point (1970) with an ending shot of the town’s main dwelling exploding in slow motion like the latter film’s climax.

It is also worth noting are the cast and crew which includes music composer Jack Nitzsche (an Oscar® nominee for An Officer and a Gentleman [1982] and One Flew Over the Cuckoo’s Nest [1975]), Allan Arbus (the ex-husband of photographer Diane Arbus and a familiar face on television in shows such as M*A*S*H*, In the Heat of the Night, Curb Your Enthusiasm), Luana Anders (a graduate of such Roger Corman gems as Pit and the Pendulum [1961] and The Young Racers [1963]), and future choreographer and singer Toni Basil (of “Mickey” music video fame). 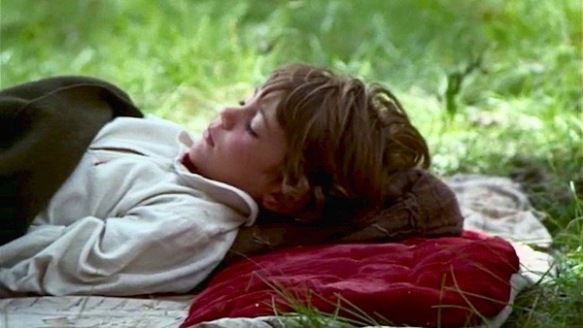 You can also see Don Calfa (the prolific character actor best known for his breakout comic performance in The Return of the Living Dead [1985]), and Herve Villechaize (the 3′ 11 inch actor appeared in various fringe films such as Seizure [1974] and Malatesta’s Carnival of Blood [1973] before landing his iconic role as Tattoo on TV’s Fantasy Island [1978-1983]). And, in a few brief scenes as the young son of an ill-fated pioneer couple is Downey’s own son, Robert Downey, Jr., whose fame and fortune would far eclipse the director of Greaser’s Palace. (The frontier wife is played by Elsie Downey, the director’s wife).

Greaser’s Palace was previously released on DVD by Scorpion Entertainment in November 2010 but is definitely due for a Blu-Ray upgrade. Perhaps The Criterion Collection, Arrow Films or some other valued movie preservation/distributor will come to the rescue.

Allan Arbus stars as Christ returned to Earth as a song and dance man treking across the wild west in Greaser’s Palace (1972).