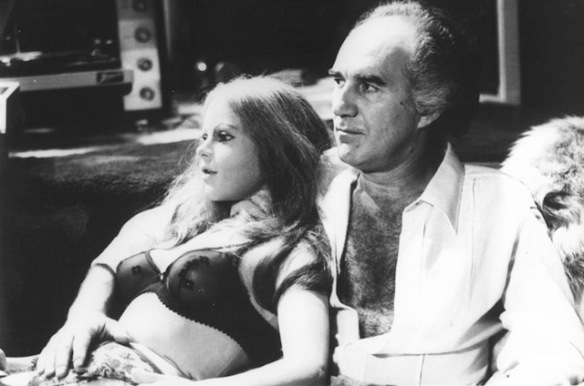 The topic of men preferring lifelike dolls or mannequins to real women is nothing new in cinema and has been treated as poignant character study (Lars and the Real Girl, 2007), rom-com fantasy (Mannequin, 1987) and bleak psychological drama (The Doll aka Vaxdockan, 1962) to mention just a few examples of the different paths taken. Luis Garcia Berlanga’s Life Size (French title: Grandeur nature, 1974) takes a more ambiguous approach to its tale of a successful dentist and his new obsession and could be interpreted as a critique of misogyny, an attack on bourgeois values or a dark, perversely amusing character study.

Life Size is actually all of these things but what sustains the film through its decidedly bizarre but sketch-like narrative is Michel Piccoli’s fully committed performance in the leading role. For the most part, self-absorbed, offensive, lustful, delusional and pathetic, Piccoli’s dentist (also named Michel) is rarely likable or sympathetic despite a veneer of polite professionalism and cultivated charm. Still, Piccoli’s performance keeps the viewer in suspense as to how far he will go in acting out his fantasy life.

It also must be said that the lifelike sex doll deserves second billing since she appears in almost every scene and remains an unsettling presence throughout. When she is photographed in long shots, low-light conditions or from certain angles, she almost looks real as if Berlunga had hired an actress to play her on occasion. The doll’s appearance is overtly sexualized with her firm, full beasts and exposed crotch but Michel exploits her availability even further when he uses a dentist’s tool to extend her tongue and position it in a lascivious expression. 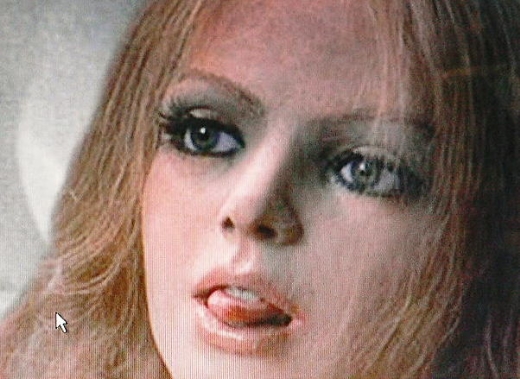 When Life Size opens, Michel is already in the final stages of breaking away from his old life and preparing for the next phase which doesn’t include his wife Isabelle (Rada Rassimov) or anyone else except his new polyurethane companion. We overhear some cryptic dialogue exchanges between Michel and others that suggest the dentist has recently weathered a difficult period marked by various affairs, therapy sessions and a bout of impotence which may have adversely affected his psyche. And the scenes between Michel and his wife make it clear their marriage is dead in the water but Isabelle pretends to humor him, either as an attempt to regain her self-respect or out of a burning curiosity.

Michel Piccoli is not amused by his wife’s impersonation of his sex doll in Life Size (1974), co-starring Rada Rassimov

When she finally confronts the reality that she has been rejected in favor of an anatomically correct sex doll, she is clearly stunned. But she stages a final attempt to win Michel back in one of the film’s most memorable sequences. He finds her in his bedroom, nude in a wheelchair except for black panties and a cigarette in her mouth, arranged in the same provocative pose of the previously glimpsed sex doll. Michel inspects her dispassionately and then reacts, pulling off her wig and dumping Isabelle out of the chair and into his closet while listing the reasons she will never measure up. His new lover, he boasts, is fireproof, never sick and she never cries. 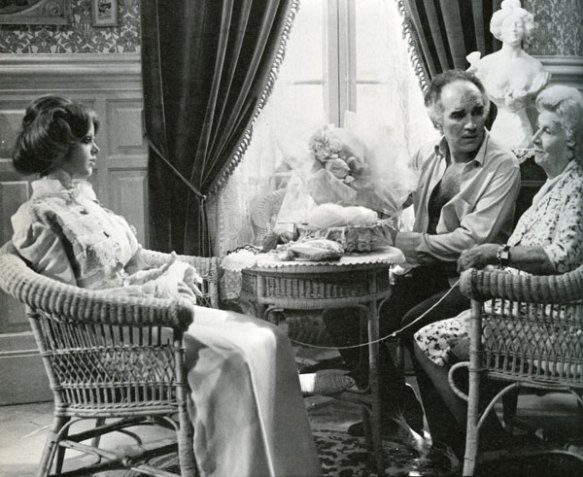 The most intriguing aspect of Life Size is the way everyone in Michel’s circle of acquaintances respond to his new companion. Michel’s mother (Valentine Tessier) briefly appropriates the doll to keep her company as she knits and incessantly chats. A fashion designer whom Michel has engaged to dress the doll shows too much interest in her assignment and is brusquely dismissed (Michel tells the doll, “That was your first lesson in recognizing a lesbian.”). Michel’s cook (Queta Claver) places the doll in bed with her infant son as a comforting presence (Michel finds the baby suckling the doll’s breast) while the handyman (Manuel Alexandre) ravages the doll when he is supposed to be fixing the furnace (Michel captures the shocking incident on video, recorded by home security system cameras).

Michel’s own relationship with the doll is schizophrenic and vacillates between treating her as a virginal innocent or abusing her as a shameless whore. He constantly renames her to fit the mood of his fantasy (Monique, Camille, Cayetanna are just a few of the monikers) such as a mock wedding ceremony, a vacation by the sea or a brutal bathtub rape. He also records their relationship on video tape and we see the couple watching themselves on a TV monitor; the doll is dressed in man’s clothing similar to Marlene Dietrich in Morocco while Michel cavorts in front of her, doing high kicks while fondling himself in a thick fur coat.

[Spoiler alert] Life Size spirals down into utter bleakness in the final twenty minutes when Michel’s companion is stolen during a Christmas party at his flat. With the help of his handyman, he tracks down the kidnapped doll and observes her being gang-raped by a crowd of drunken men in a remote barracks. The doll is rescued but Michel’s insane jealousy causes him to impulsively drive his speeding car into the Seine (most of the film is set in and around Paris). In the final shot, we see an anonymous man on a bridge staring at the semi-nude body of the doll as it floats away. That fadeout is open to interpretation but, for me, Life Size is ultimately a despairing look at a world where artificial companions are preferable to human ones.

Michel Piccoli has one of his jealous rages in Life Size (1974), a wicked black comedy from Luis Garcia Berlanga

While Berlanga never made another film quite as eccentric as Life Size, it shares similarities with his earlier work. Along with Luis Bunuel and Juan Antonio Bardem, Berlanga’s films were often reactions to the government-controlled cinema of the Franco regime and he satirized everything from foreign aid programs (Welcome, Mr. Marshall, 1952) to social mores (Plácido, a Best Foreign Language Oscar nominee in 1962), to capital punishment (El Verdugo, 1963). Most film historians agree that the early sixties marked Berlanga’s peak as a filmmaker though he would continue to make movies until 1999 (he died in 2010). His final feature, París-Timbuctú, about a world weary plastic surgeon (Michel Piccoli again) who decides to drop out of Parisian society and disappear, is similar to Life Size in its depiction of human loneliness and alienation. Unfortunately, Berlanga’s work is rarely revived or mentioned today though his keen sense of satire and black comedy was obviously an influence on the Spanish filmmakers who emerged in the post-Franco years such as Pedro Almodóvar, Bigas Luna and Alex de la Iglesia. 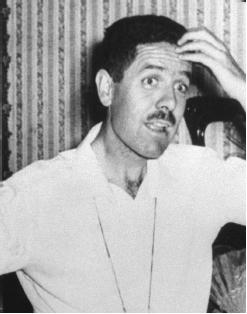 As for Life Size, it never had a proper theatrical release in the U.S. and the few critics who saw it found it inferior to his earlier work. Writing about the film, critic Jonathan Rosenbaum said, “The trouble with Luis Berlanga’s exhaustive movie is that what he has to say could probably be squeezed into about ten minutes without much sweat.” Yet I think the film is well worth seeking out by adventurous cinephiles and fans of Michel Piccoli.

Still acting at the age of 90, Piccoli is one of the unsung heroes of European cinema and has worked with some of the world’s greatest directors and appeared in such key works as Jean Renoir’s French CanCan, Jean-Pierre Melville’s Le Doulos, Jean-Luc Godard’s Contempt, Luis Bunuel’s Diary of a Chambermaid, Agnes Varda’s Les Creatures, Mario Bava’s Danger: Diabolik, Louis Malle’s Atlantic City and Leo Carax’s Holy Motors to name just a few. And his performance in Life Size is in the tradition of the kind of anti-bourgeois protagonists and social outlaws he portrayed so masterfully in Marco Ferreri’s Dillinger is Dead and La Grande Bouffe, Bunuel’s Belle du Jour and The Discreet Charm of the Bourgeoisie and Claude Faraldo’s Themroc.

Life Size is currently unavailable in any format in the U.S. except as a bootleg DVD-R through specialty distributors. However, the Spanish language version Tamaño Natural is available on Blu-Ray in Europe and you can probably purchase a copy of it from Amazon if you own an all-region player. 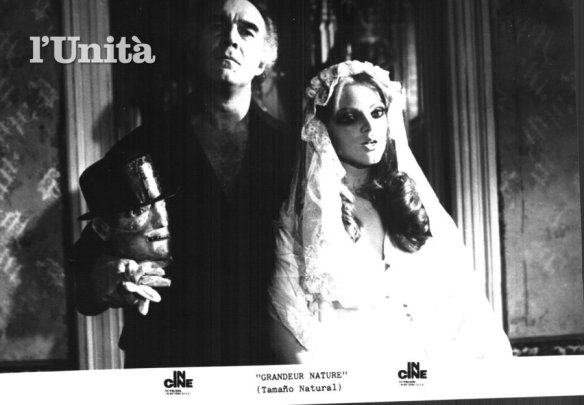 Other websites of Interest: 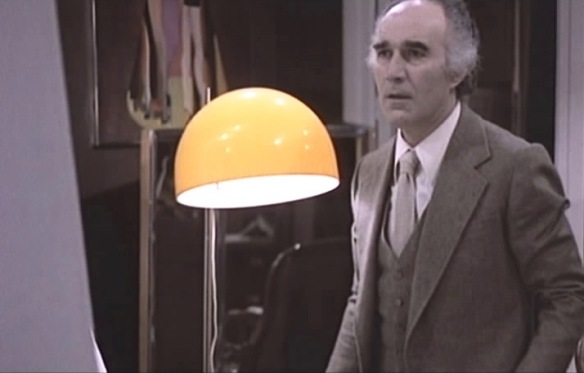